Below - the area as it once was - courtesy of Google Earth 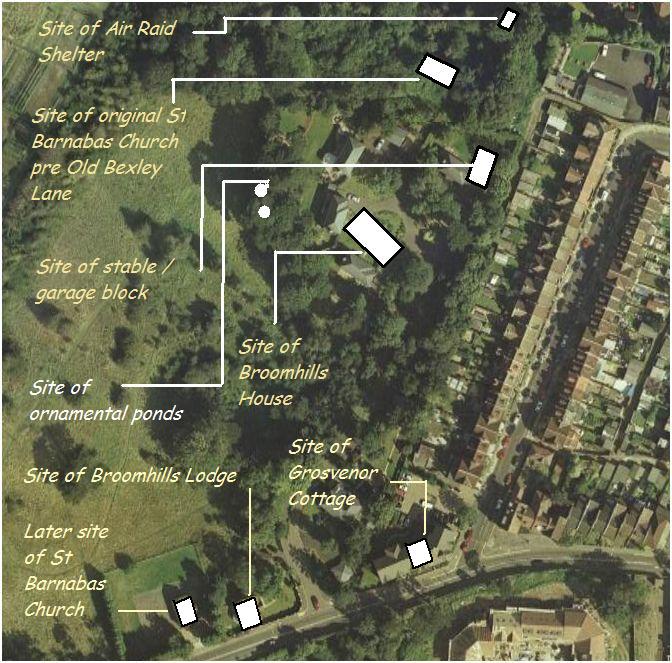 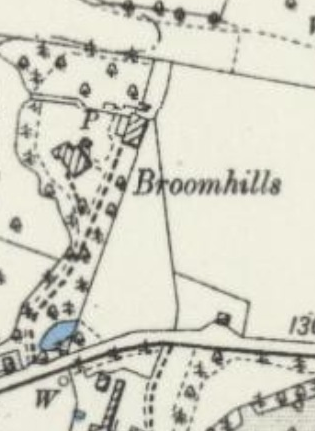 Above - Ordnance Survey c1880 of Broomhills - note blue pond
Below - Left see the movie of walking to Broomhills - Spring 1988
Right - the ponds to the left of Broomhills as you look towards it from the front - Spring 1988.
No apologies for the soundtrack - put together in a moment of creative vacuum nearly 30 years ago !

Broomhills was the name of a large house which once stood in the grounds now occupied by Broomwood Close. The original entrance gate had a lodge house to the west of its narrow, tree and shrub lined drive. Both the Lodge and Broomhills, itself, were demolished over the period 1996 -1997. The O.S. map of 1869 shows the lands of Broomhills as being undeveloped. A new house has been built (c2000)on the site of the old Broomhills Lodge. 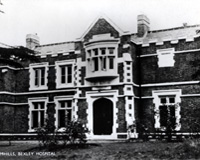 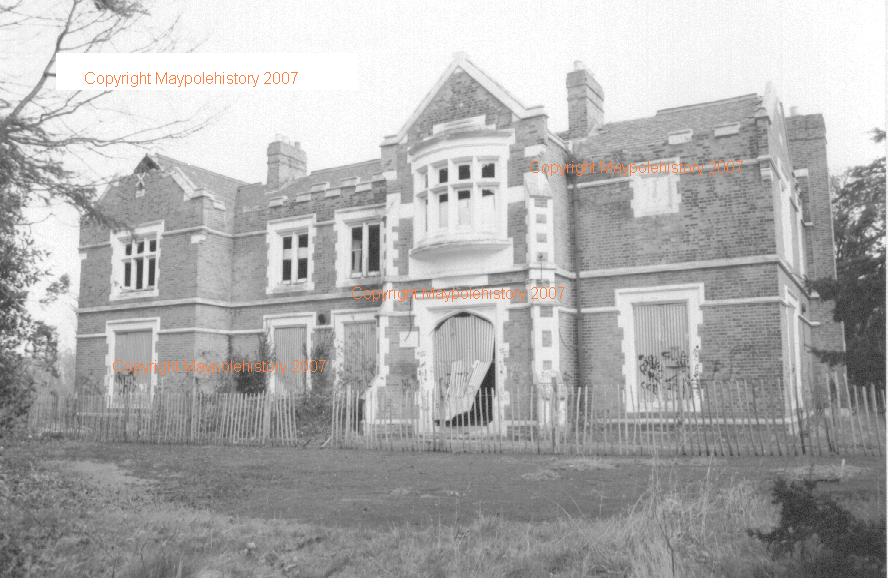 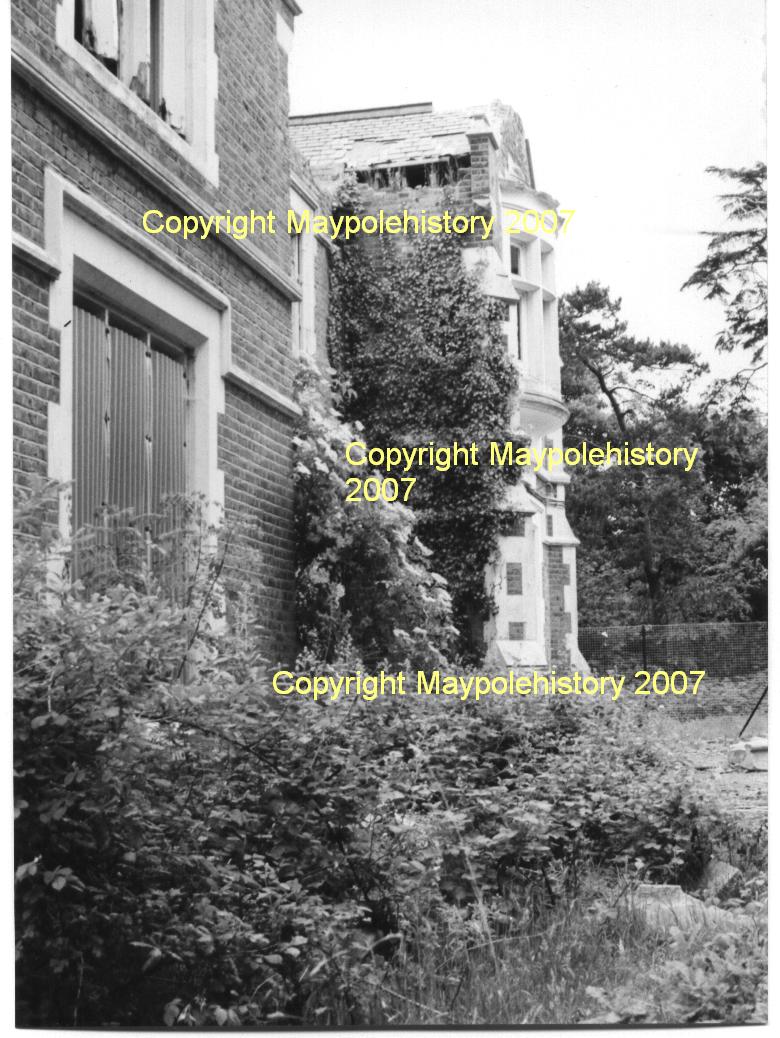 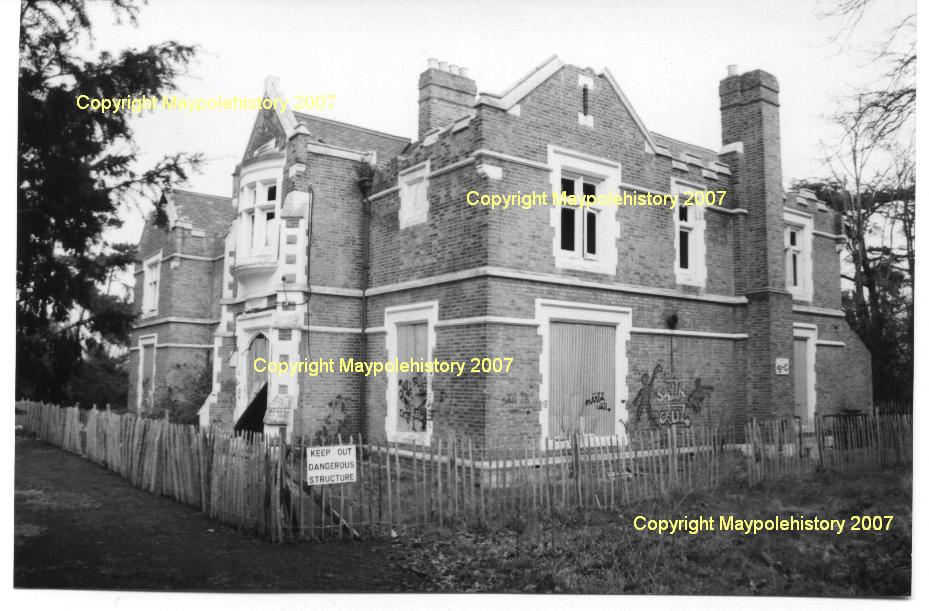 Broomhills in state of dereliction c1996 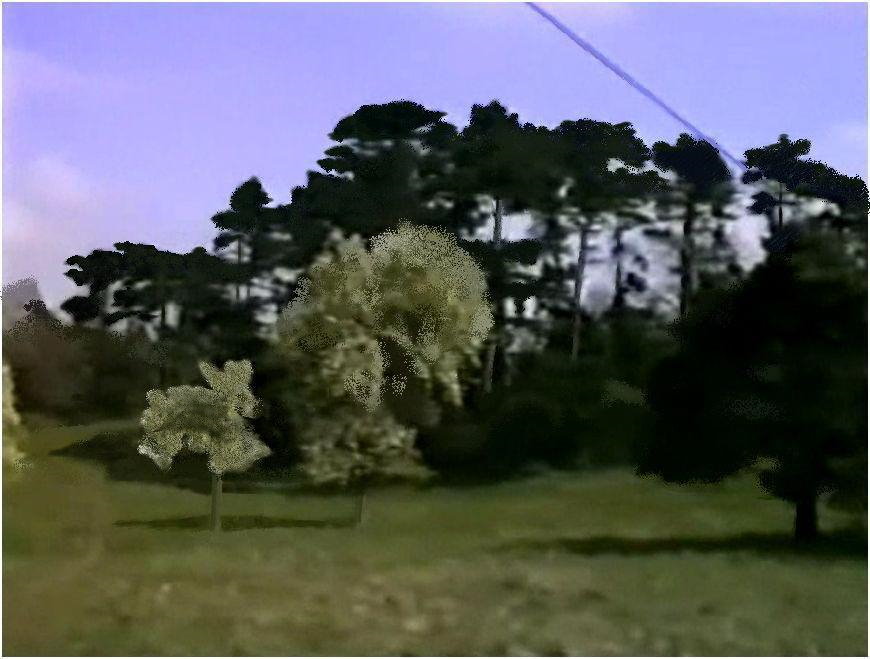 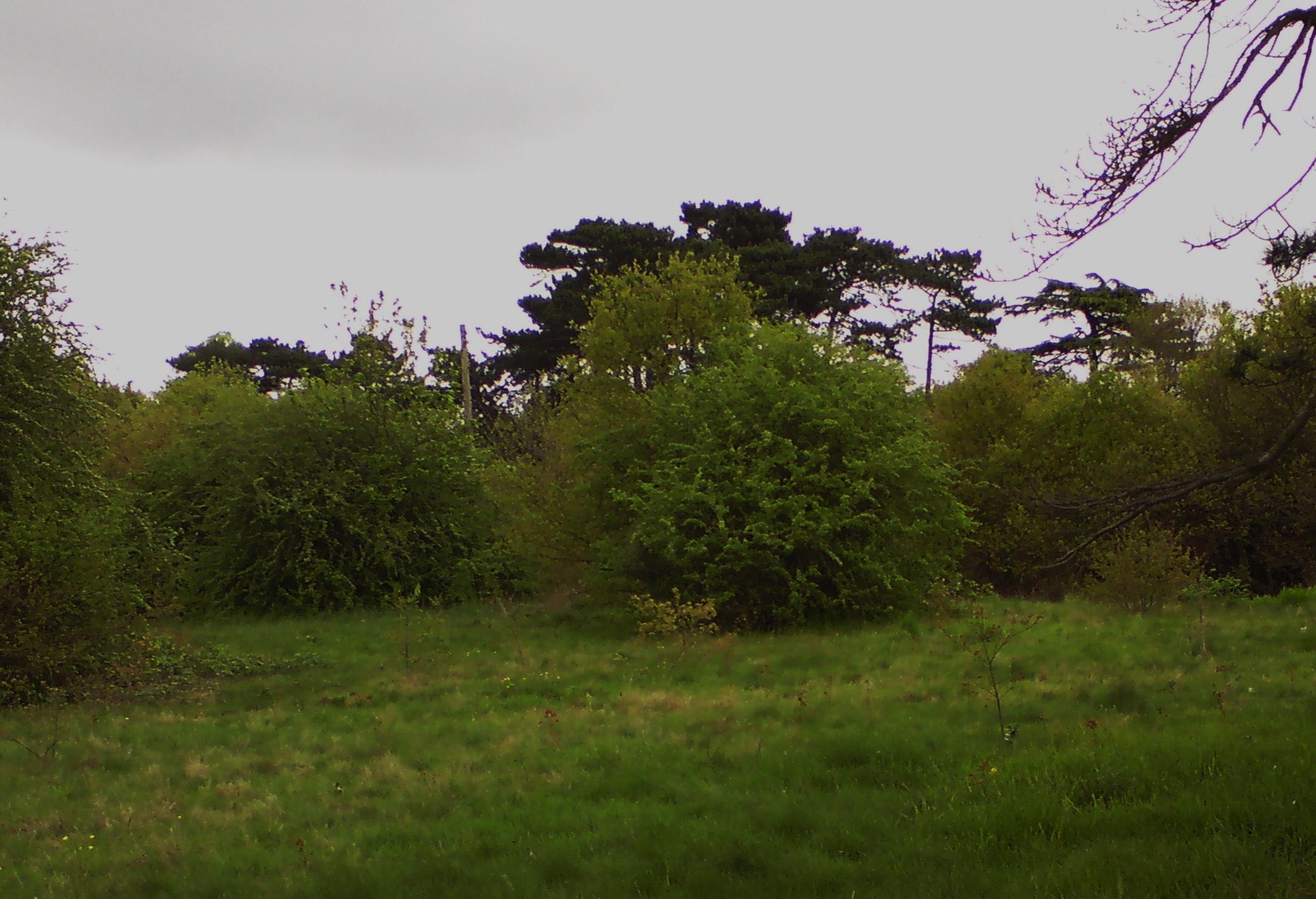 The pamphlet published especially for the auction sale of Baldwyns in 1876 refers to: Maypole Farm - with Lodge and Broomfields. Perhaps this is where the name Broomhills originated. It seems likely then that the lands of Broomhills originally once formed part of the Maypole Farm plot of the Baldwyns Estate. (There is an established house called Broomfields - a distance of a mile or so away to the east at the top of the hill in Common Lane, Wilmington near the junction with Parsonage Lane and is, most probably, not connected)

The Census of 1881 shows the site of Broomhills occupied by the GLYN family. The head of the family was Lewis GLYNN, aged 31 yrs and he was married to Mary aged 26 yrs. He was a Barrister at Law. At that time they are shown on the census as having two children Mary, aged 4 yrs and Harry, aged 5 yrs. Title deeds to 27 Beaconsfield Road dated 1879 mention Lewis GLYNN. This would then indicate that the house was built and occupied sometime between the years 1869 and 1879. The census of 1871 shows Lewis GLYNN as the nephew of Charles GIBSON - a solicitor and staying with the family at 37 West Hill, Dartford on the night of the census. He is shown as being aged 21yrs and a Law Student - quite possibly at his uncles firm.
Census from 1871

This census shows the uncle as Charles and the aunt as Jane. Ancestry reveals that Jane was nee SCAIFE. Charles died in Manor Gate, Wilmington 26 January 1895. Jane died 25 February 1907 at Cumberland.
Some of the older residents of Maypole Estate remembered the field in front of the old house as 'GLYNS FIELD'. In 1881 Fanny GLYN also lived there. She was the younger unmarried sister of Lewis. The staff of Broomhills are listed on that census as being:- Alice LUCAS aged 19 yrs - the housemaid Rose LUCAS aged 17 yrs - the nurse (presumably to the two little children) Elizabeth NEWMAN aged 50 yrs and unmarried - the cook / domestic All three were single. It may be deduced that Rose and Alice were sisters as they were both born in Leatherhead, Surrey. Broomhills Lodge was the name of the lodgehouse to Broomhills and, as already stated, lay on the main road between Maypole Estate and the 'Dip'.

The Census of 1891 shows that 'The Lodge House', Dartford Lane, housed the TUTHILL family. (The electoral register of 1900 confirms that this 'Lodge House' does refer to Broomhills Lodge). The census of 1891 also shows the head of the household as being George TUTHILL and he was employed as 'Coachman Groom'. He was aged 40 yrs and married to Kate who was aged 42 yrs. They were shown as having three children, namely Mary, Robert and Peggy aged 9 yrs, 7 yrs and 3 yrs respectively. Thomas TUTHILL was shown as also being there aged 33 yrs - the brother of George.

Below Broomhills Lodge in state of dereliction prior to demolitionc1997 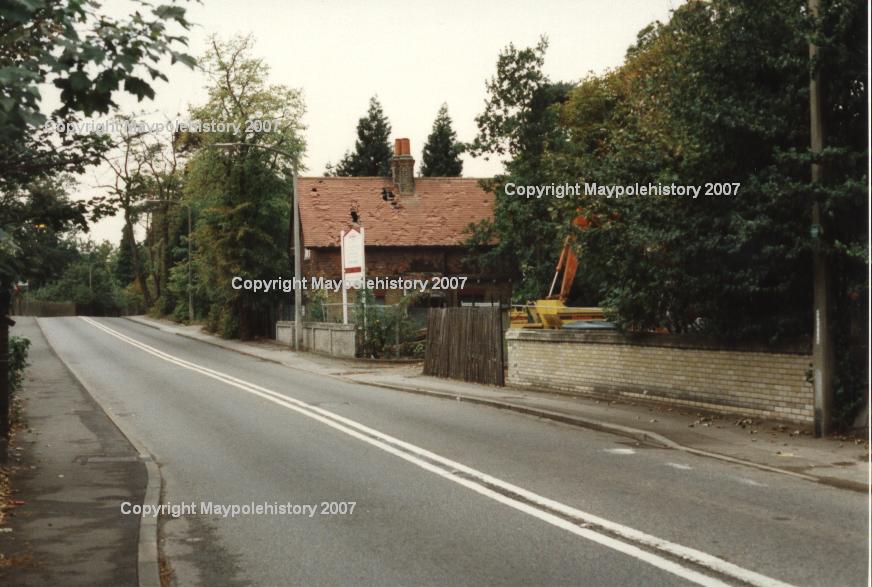 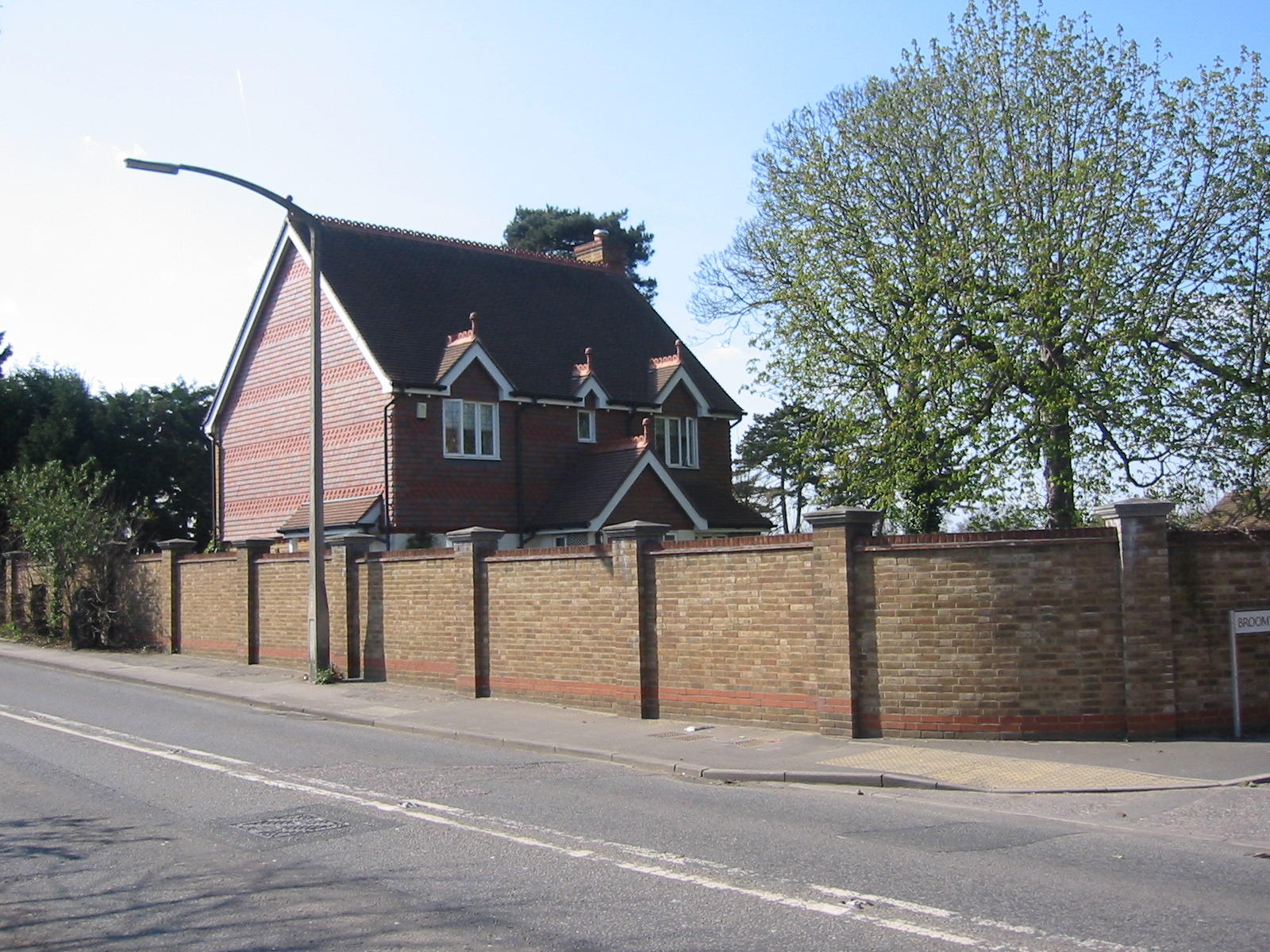 Below - courtesy of Google Earth 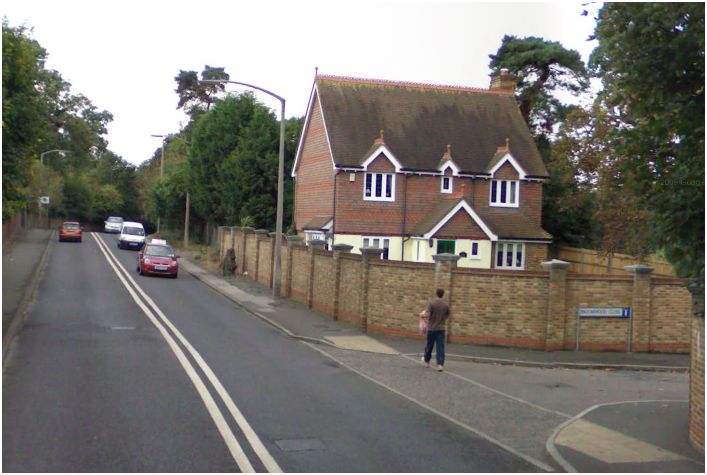 The 1891 O.S. map also shows the site of the Lodge developed. I believe that GLYNN had a stake in other land where the Maypole Estate now stands. Whether he arrived by them through purchase of Broomhills or by further speculation I am not sure. For instance, title deeds to 27 Beaconsfield Road show that in 1878 the land on which it now stands named Lewis Edmund GLYNN as being in a covenant, together with Frederick George GIBSON. Frederick George GIBSON was an uncle of Lewis born 1834 - died 1929 and was the brother of Charles Reginald as shown earlier in the census records of 1871.
In 1878 the land was partitioned and another name entered the equation; that of Charles Reginald GIBSON - an uncle of Lewis. In 1879 there was further partition showing Frederick GIBSON, Edward Robert JENNINGS and Frank FELL. GLYNNs' name is no longer mentioned and I believe that he sold his interest in the Beaconsfield Road site to the developers GIBSON, JENNINGS and FELL. It is therefore possible to imagine that Lewis GLYNN may have bought the freehold of BROOMHILLS and Maypole Estate, in whole, or if not, in part.
Broomhills Lodge census 1911 - TUTHILL family 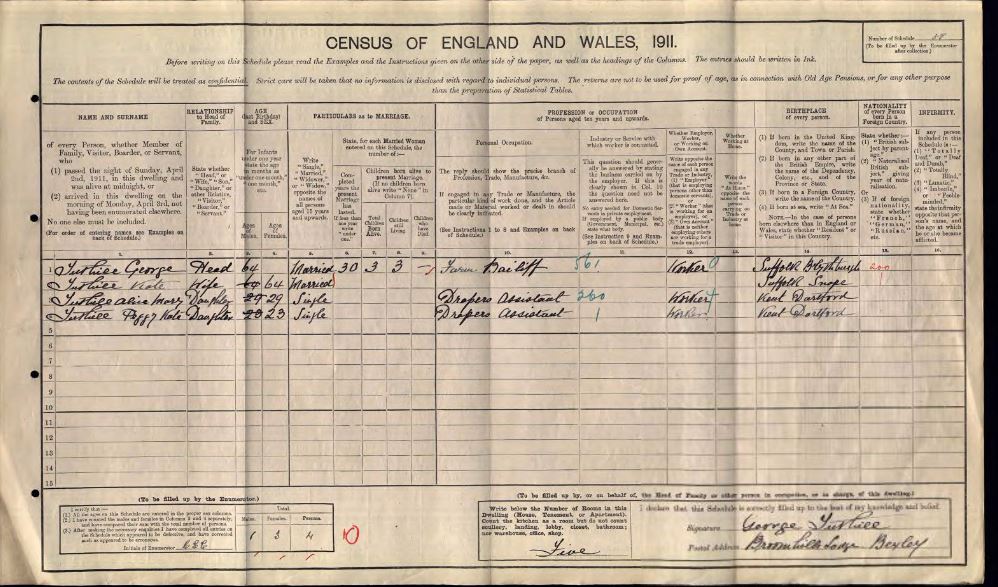 Records show that the GLYN family were resident there until at least 1914 - see Annual Procession and Sports Day. The 1911 census shows the family at Broomhills. However, a census dated 1901 shows the GLYN family at Thistlewood, Penrith, Cumberland. It would seem they may have had two prestigious properties. Lewis GLYN is shown as dying at Thistleton in 1919 aged 69 yrs.
1911 Census 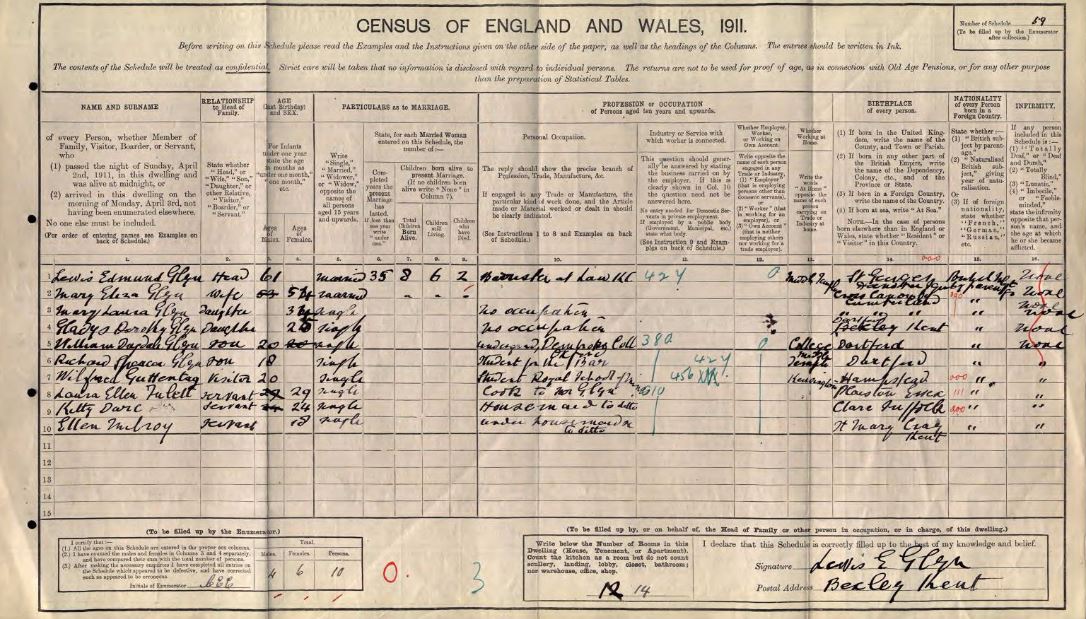 1911 Census shows the WESTON family as residing. Occupation as a 'Traveller - photo engraver' 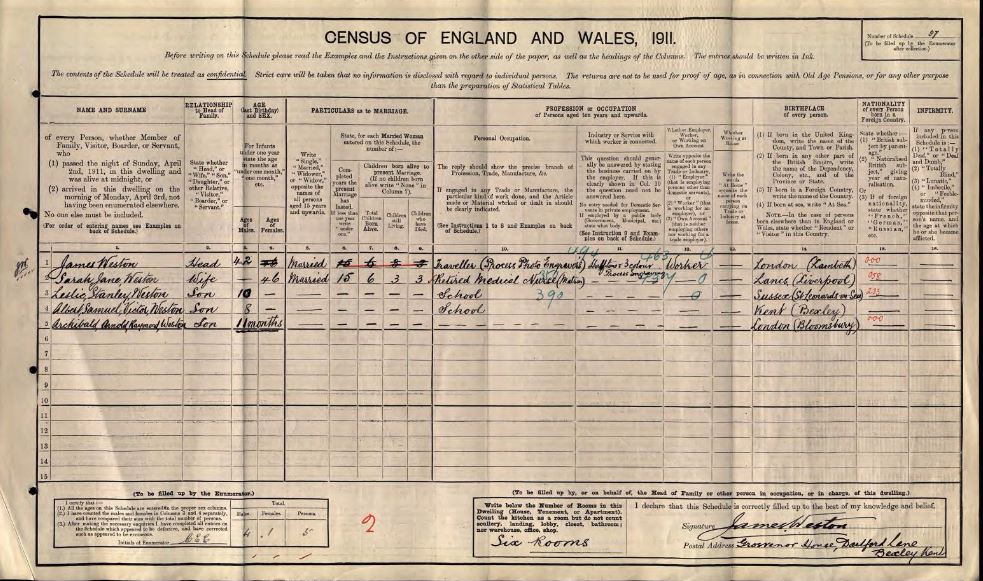 The 1937 electoral register also shows that the CAMERONS owned Grosvenor Cottage as well - an Edwardian detached family residence once situated on the northern side of Old Bexley Lane and adjacent to the west of the junction with Baldwyns Road. 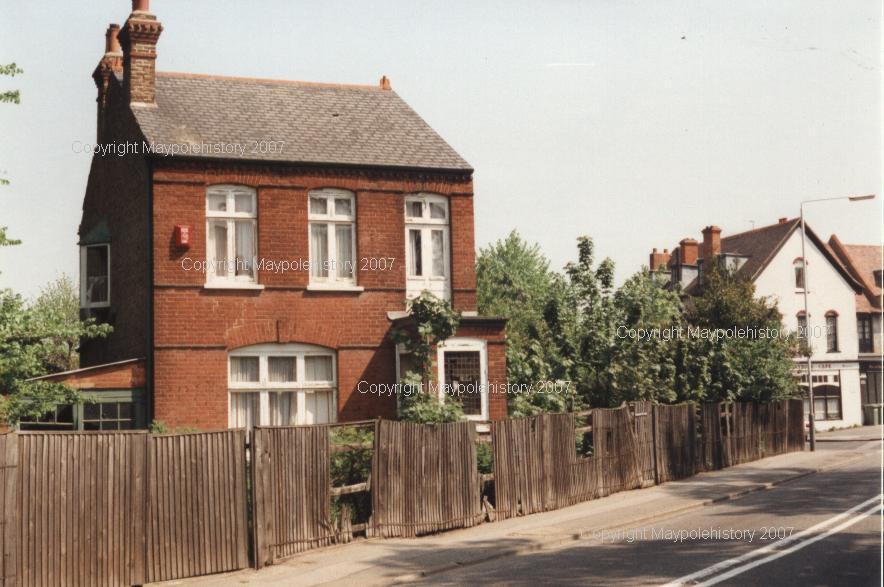 and as it looks now with the new 'Grosvenor Mansions' on it's site. 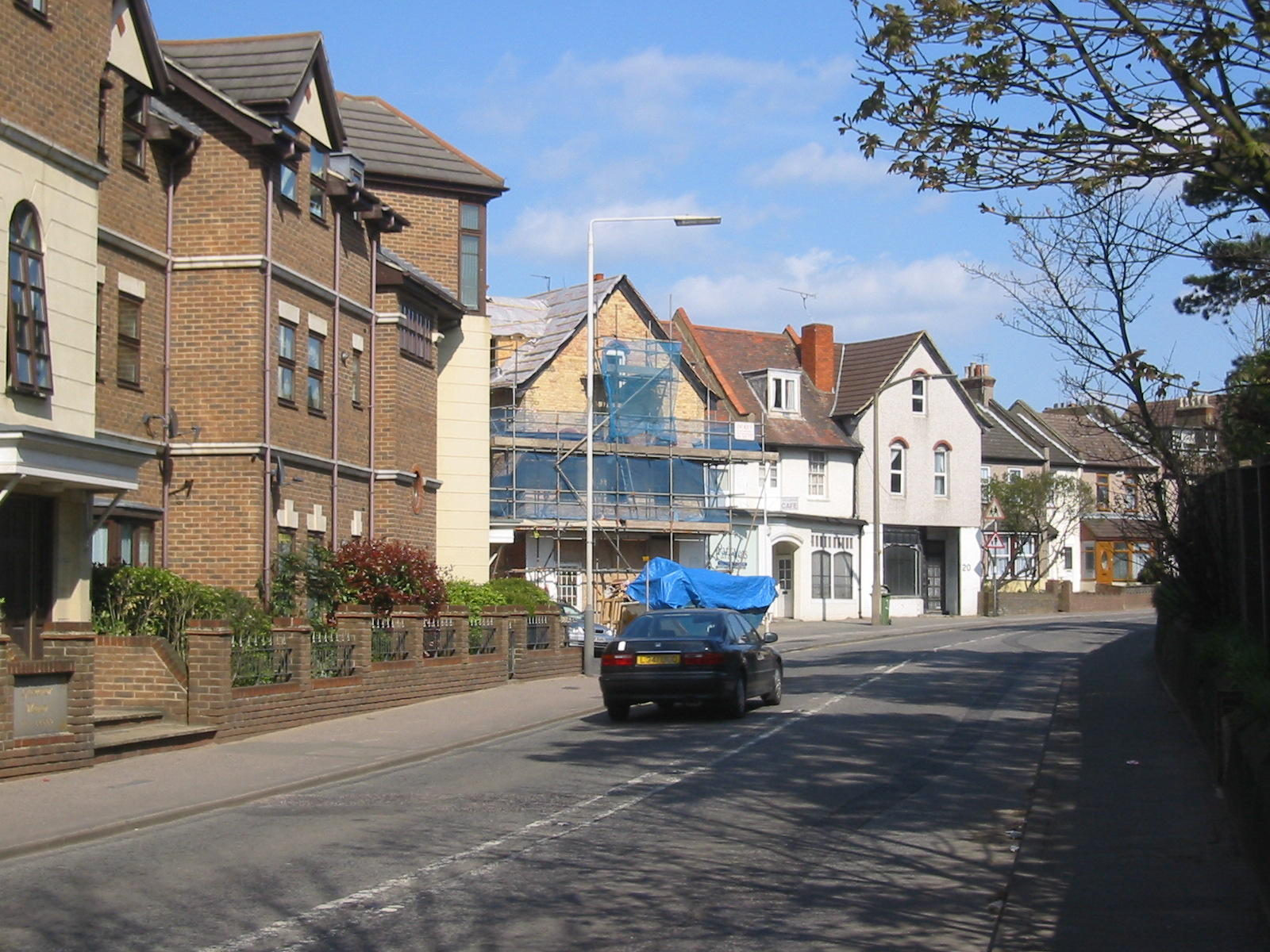 The electoral register of the same year shows Joseph CAMERON in residence at Broomhills. Also living there were Elsie BONNER and Margaret BENNETT - presumably staff. The same electoral register shows Frances CAMERON - his wife - at the nearby Grosvenor Cottage. The electoral register of 1945 shows Joseph CAMERON and Elsie BONNER still at Broomhills itself, with Frances, his wife and John, his son, at Grosvenor Cottage. Joseph died in 1949. Although GLYNNS Field had been used for haymaking during the CAMERONS stay I can only ever remember it during the 60s / early 70s as being used by the Bexley Hospital for the grazing of their cows. BROOMHILLS and its lands were owned at that time by Bexley Hospital for the use of tending short stay patients.
Joseph CAMERON died on 19th November 1949 leaving in his Will £59362 and 10d. At today's values (2016) this is over £3,000,000. See below. He was buried at St Mary's Bexley 4 days later.

I believe the house and grounds were sold to the hospital by the CAMERONS c.1959. The narrow drive to Broomhills (virtually on the same drive currently to Broomwood Close) was bordered to the west (field side) by mature horse chestnut trees. As a schoolboy, I can vividly remember harvesting the immense crop of 'conkers' they would bare every Autumn. I remember in the late 1950s that the Lodge was used to house the hospital farm pigman and his family. Bexley Hospital had a large farm and made good use of GLYNNS Field. One of my earliest recollections of the Lodge was as a young boy c.1961 visiting the family who lived there. I can distinctly remember that they had a son who suffered cerebral palsey. Despite this, he was a very happy child. Later (c 1966) the Lodge was used then and thereafter for housing medical staff. I think it was last inhabited c 1982.
Below is a photograph taken c1957 donated by Susan DENISON who was the daughter of the pigman who lived in Broomhills. It shows Maypoleman and Susan in the garden of Broomhills Lodge. In the background is Broomhills Field where the cows from Bexley Hospital were placed in the late 50s - late 60s. 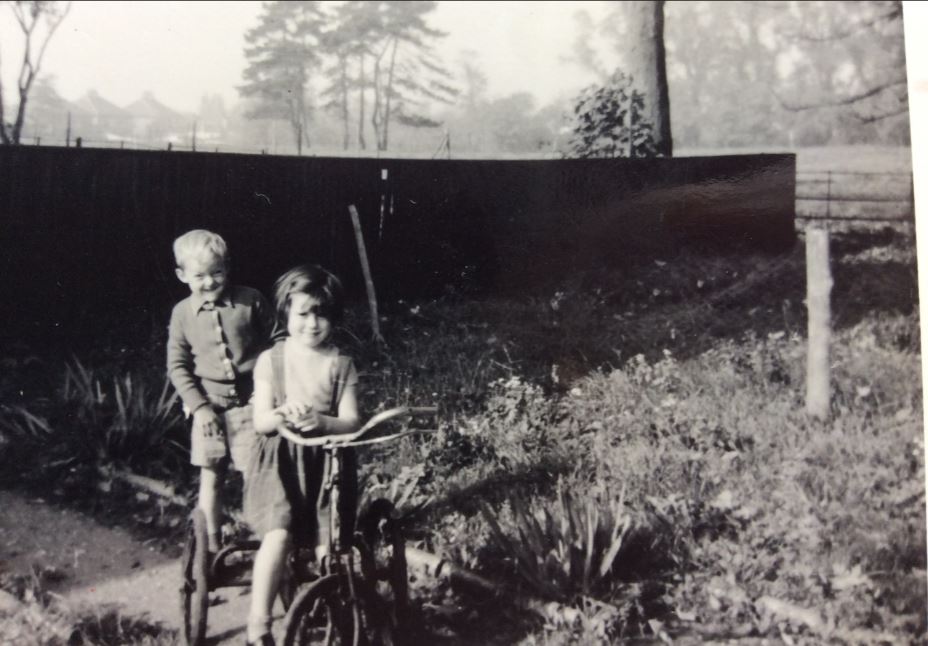 Other childhood memories of Broomhills range from catching frogs in the ornamental ponds, situated westerly of the house, to the unearthing of an air raid shelter at the Northwest and using it as a base 'camp' for us local boys. Most of our childhood activities in the grounds were conducted using stealth and cunning as they were strictly private. It was not for use as a playground by the 'oiks' from the housing estate! Another building I remember to the north west of the grounds was an old concrete, round shouldered Nissen type hut. Presumably during the war it had been used for some related purpose or another but in my time it housed the cows.

The air raid shelter referred to earlier was situated right to the Northeast of the boundary and close to the Maypole Institute. It probably could have slept 8 or 10 people at a push, and was quite substantial. There are traces of it still. Mrs Dorothy HERF (nee CAMERON) told me that her father, Joseph CAMERON, arranged for it to be built. She also tells me that he was surprised when he began to build it to find traces of an earlier building there. Apparently he used the footprint and walls of the existing remains for his shelter. The brick walled outline construction still remains under tipped rubbish. Was it an ice house at one time ? A boiler house for the greenhouses ? A brick kiln ? Maybe we will never know. 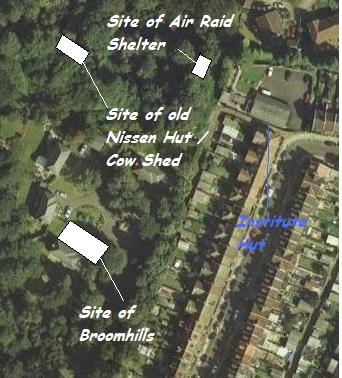 She was unable to say what the original building had once been. I remember that the two end corners opposite the two small entrance doors were rounded as opposed to squared. Could this have been an 'Ice House' - or was it too far from the main building ? Could it once have been a brick kiln ? An aerial photograph c1925 shows the outline of a narrow construction running from the direction of where the stables once were towards the Maypole House boundary (to the rear of the Institution hut). I have been told (Mr Alfred PETERS) that there was once a long greenhouse on this site. Could the original brickwork of the shelter have been some form of boiler house to heat the greenhouse ?

A fascinating little anecdote attached to the story to the outbuildings is the fact that several people have told me (Including the late Gordon LENNOX) that the stables ( later the garages ) had a small turn table mounted in the floor. This enabled any vehicle within to have been turned on its axis - drive in forwards and drive out forwards !! I can remember these outbuildings - as they backed on to the rear alleyway of the houses and gardens in Baldwyns Road. Even though I scampered all over these garages as a child I cannot really remember this turntable, for I suppose it must have been well before my time.

Below - Old Bexley Lane looking towards Baldwyns Road and Bexley c 1994. Clearly shows the side of Grosvenor Cottage behind wooden fence. 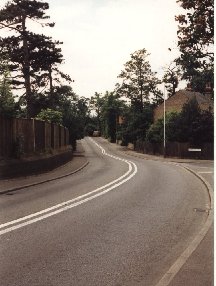 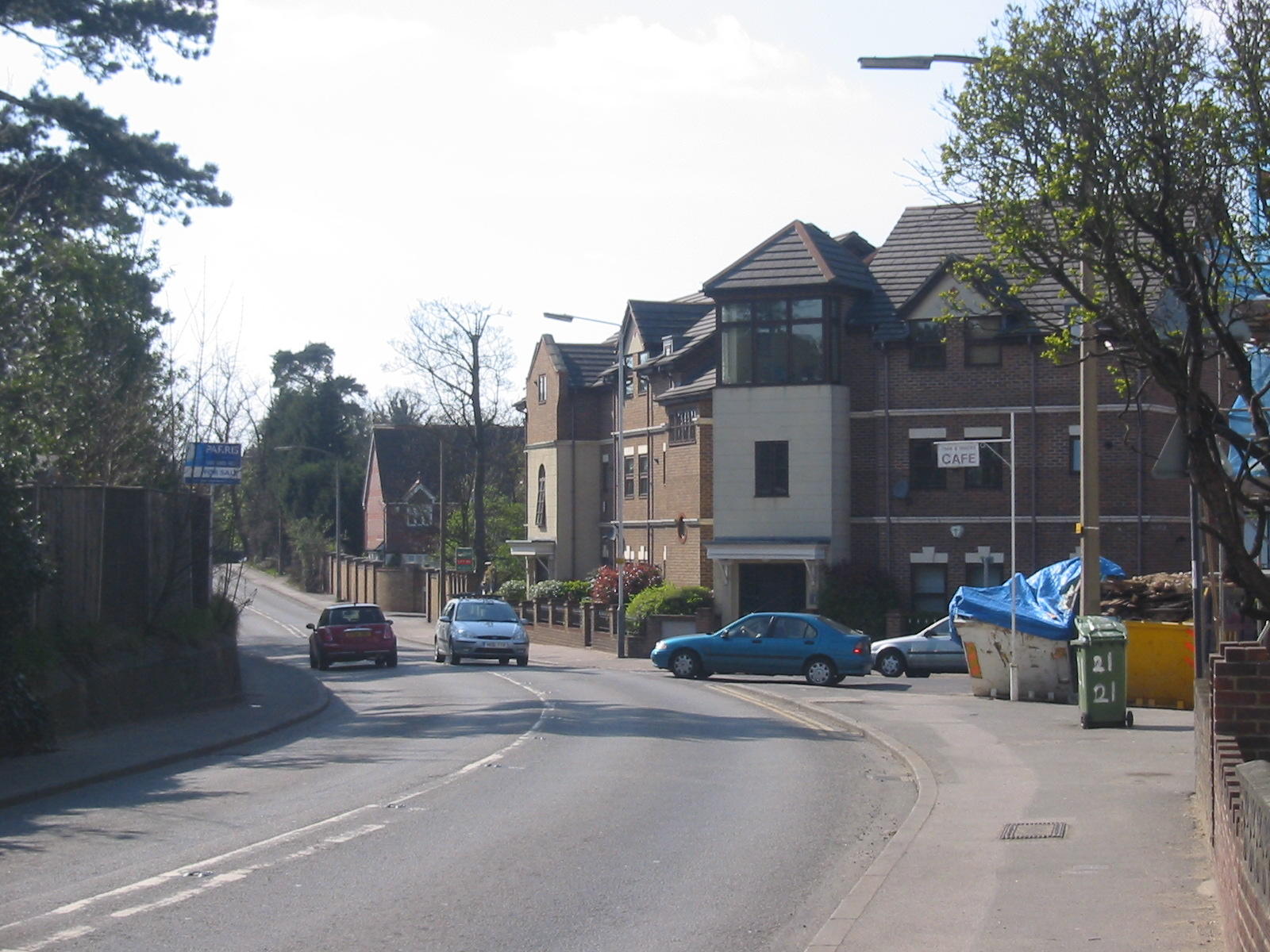 The spacious house of Broomhills has now been demolished ( November 1996 ) and new houses have been built. The road is now called Broomwood Close. The Lodge (demolished 1997) and Grosvenor Cottage (demolished 1996) also have gone. There is a complex of flats on the site of Grosvenor Cottage called ‘Grosvenor Manor’. GLYNNS Field is now open to the public as some kind of pathetic reparation for loss of recreational land in 1970 when the A2 was built on Dartford Heath. The once very secret places outlying Broomhills and guarded under its protection, are now very exposed and quite unkempt. 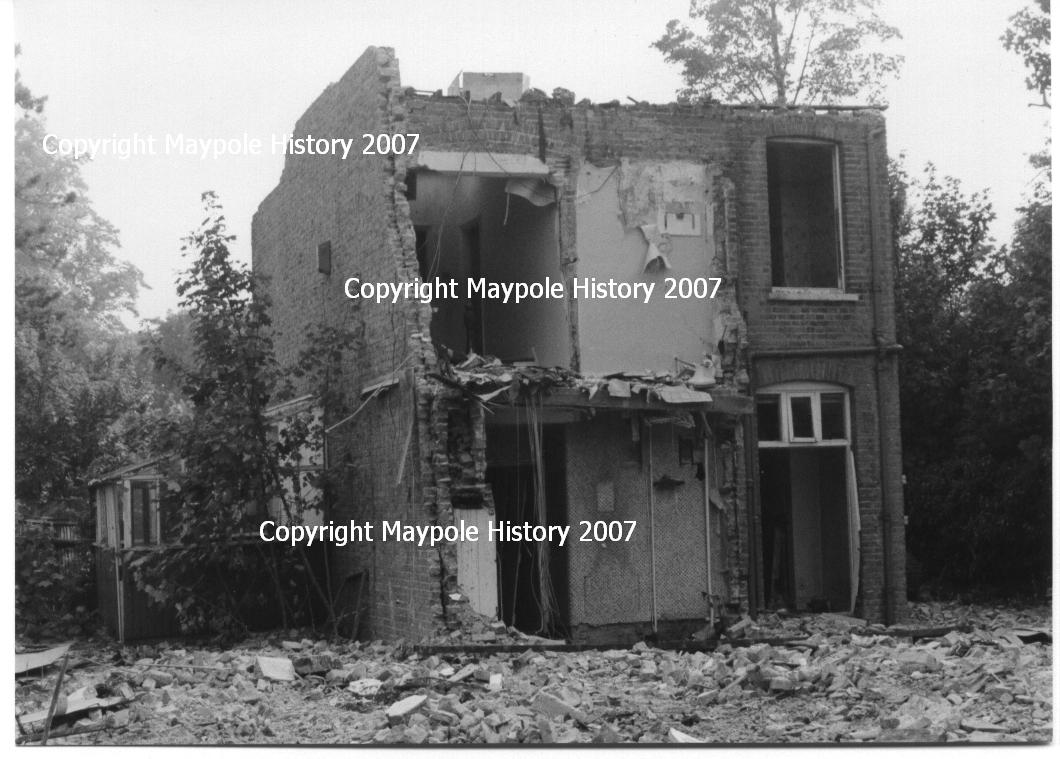