To Homepage
At the time of the Roman Invasions of 55 BC and 43 AD a tribe of Celts lived in this part of the country. The tribe was known as the Cassii and it was led by their chieftain CASWALLEN. They lived in the kingdom of Cantiace - a kingdom perhaps covering what is now the size of Kent and a part north of the Thames. The Cassii tribe had a settlement in an area of land occupying what is now known as Joydens Wood, Rowhill and part of DARTFORD Heath. To all intents and purposes this was an 'ancient city'

" The city of the Cassii was somewhat in the shape of an irregular triangle, and commenced at the southern point at Stanhill, in the Parish of DARTFORD, and extended directly north westward to Stankey"

( STANKEY was the name for an area occupying the land situated at the junction of DARTFORD Road and Baldwyns Park, and is referred to as such in the Ordnance Survey Map of 1869. ) The most common building material at that time would have been what is now referred to as 'Bio degradable' i.e. wood, mud, wattle, straw etc. As a result, there is nothing obvious to indicate its' original site and existence. The common Celtic house was round with a huge conical roof. The floor might have been of neat clay, the roof made of wood covered in thatch. The short walls would have been of wattle. The Celts were believers in settling in wooded areas , fencing off the outside and then erecting their houses and animal pens within. The Greek geographer STRABO referring to these 'Towns' (or 'Oppida' as Caesar named them) described them thus:


" Forest thickets are their 'cities'. They fence round a wide clearing with felled trees and here they make themselves huts and keep their cattle "


Julius Caesar led his second invasion to Britain in 54 BC and, in this area, (according to local historian DUNKIN) made an advance as far as RUE HILL (ROWHILL).

This hill still stands high and proud along Rowhill Road - just to the east of Birchwood Road between Hook Green Lane and Puddledock Lane. Legend has it that it is thanks to CASWALLEN that this was the highest point in the area - for it is purported that this natural mound was enlarged and heightened by his people. (The Ordnance Survey map of 1883 confirms a British Camp existed at this location). This then, by some form of weak definition was a Hill Fort. Legend also has it that CAESAR attacked and defeated CASWALLEN (or part pf his tribe) and made his own camp at ROWHILL. CASWALLEN regrouped and within a day or so counter attacked and successfully drove off the Romans. This may be another way of saying the Romans decided they had had eoughof Wilmington and decided to march somewhere else !


The below describes an ancient British Road that still runs through Joydens Wood and which is still in evidence today. It describes at least two fortresses of this city of CASWALLEN, namely TYRRU and STANKEY. One could not be blamed for assuming that there was also another fortress at its' most southerly corner, forming a triangle of defence, at STANHILL. DUNKIN describes thus:

" The great road continued over hill and dale to the city of Cassii, which it entered at the south eastern extremity ( Stanhill ) : and by Caudens Wood ( Joydens Wood ? ) proceeded to North Cray, Prior to its' entrance it threw off two branches, one to the chief fortress, Tyrru and another to Stankey, the extreme northern point of the city "

The road named Baldwyns Park, and now on the site of Stankey Wood, was built c1927. I am told that just prior to this development this 'road' was a single track leading towards the thatched, six sided cottage in Tile Kiln Lane. ( A previous name for Tile Kiln Lane was Pot Kiln Lane) 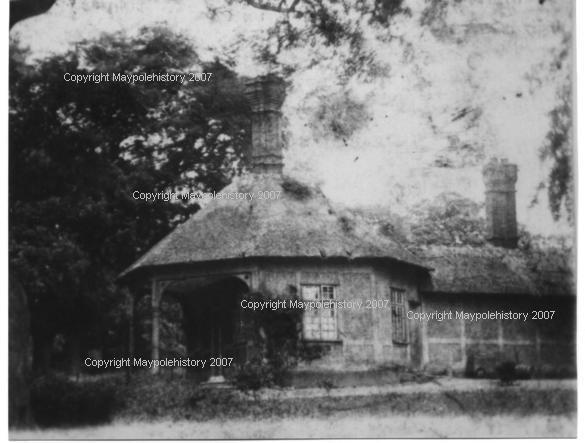 There was a gate at the junction with this track and Dartford Road, preventing general public access to it. The track meandered through a coppice and was adorned seasonally by bluebells and other woodland flora and fauna.

Sadly, the excavations of Bexley Hospital site in 2001 revealed little evidence of permanent and continued settlement - please click here to learn more. If you read the report on the hyperlink a few words back, and can make much sense out of it and can draw a one sentence conclusion then please let the Maypolehistory team know as we were a little flummoxed by all the alien language and descriptors ! Don't clever people really irritate ?