There wasn't originally going to be a page on the heath - but it featured so much in the history of the Maypole Estate that we shall begin one . . . .

Below - a view of the heath looking towards the Bexley Asylum c 1910. Note the trees on the right. This is the site of where houses were built along an unmade road called 'The Dell'. The child sitting in the centre of the image is probably just to the left of where Denton Road ran and is now in the middle of the new A2 - well, built in 1970 ! - and probably in the centre of the footbridge now over the A2 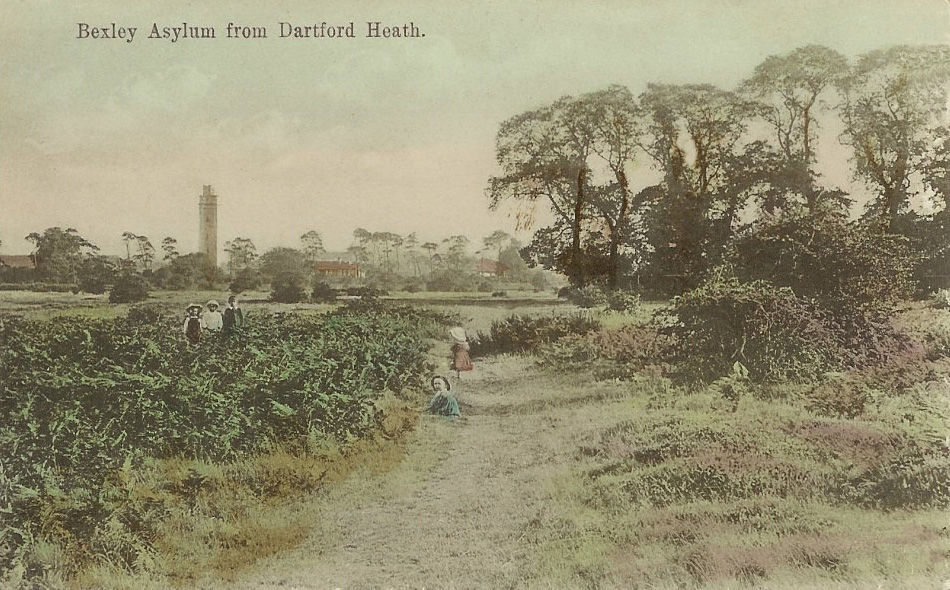 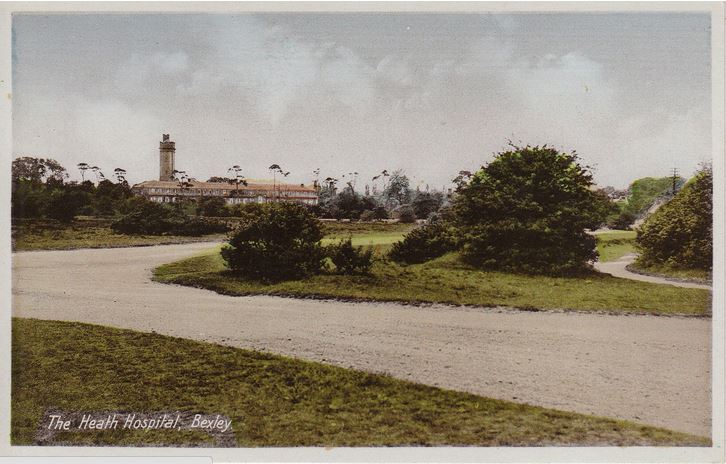 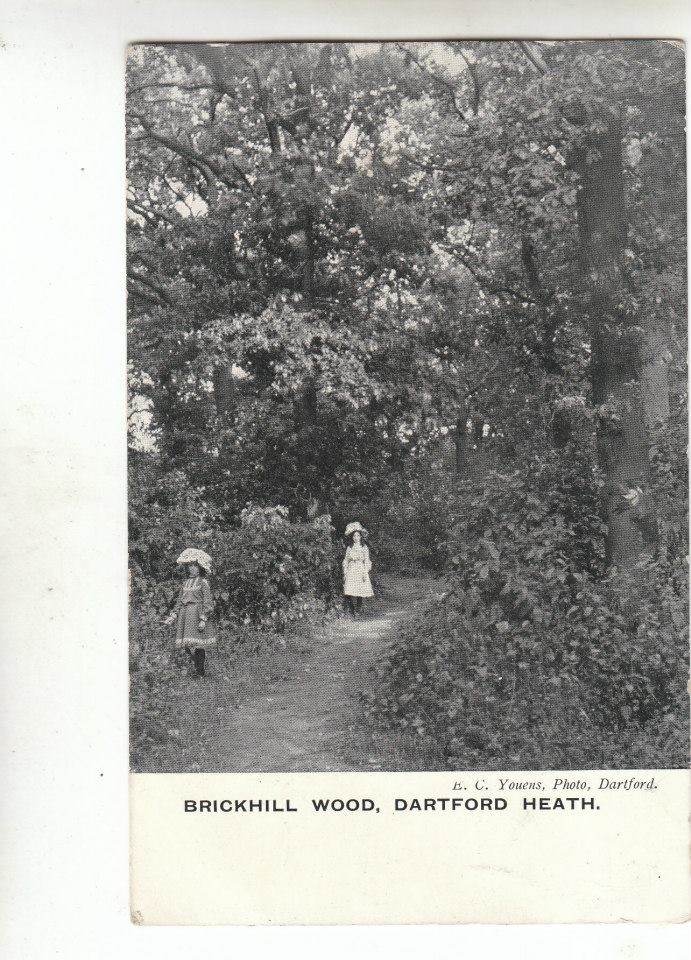 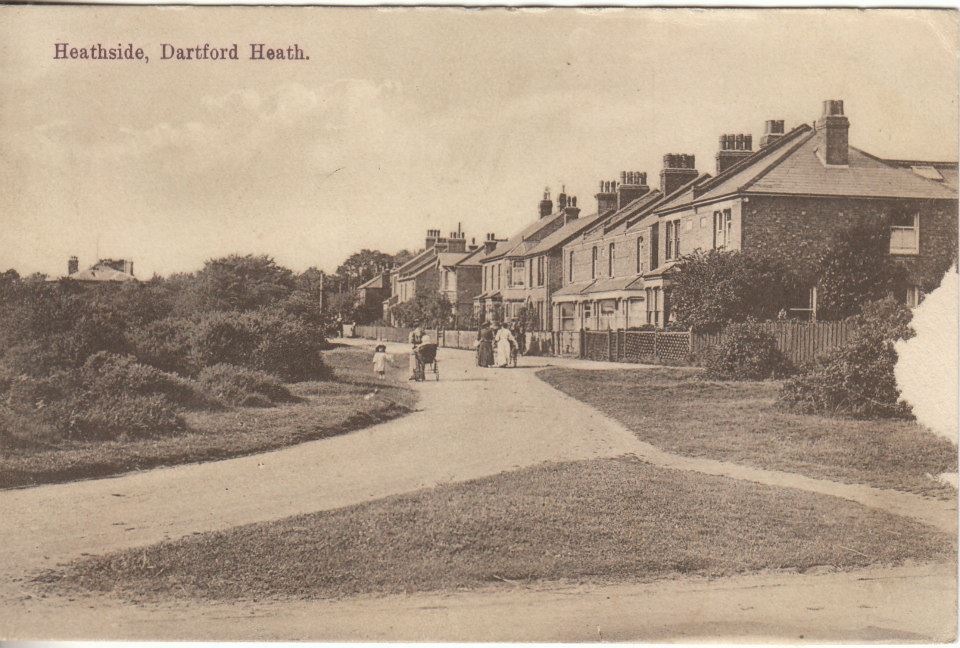 DARTFORD HEATH - A CHRONOLOGY
(Most of the initial information supplied on fact sheet from Dartford Library)
1660 On May 29th an address was given by King Charles II in a ceremony held on Dartford Heath. After this event had taken place several regiments of horse, under the leadership of General MONCK , escorted the King to London (DUNKIN p.386).

1723 Dartford played a cricket match against Tonbridge on the heath.

1726 Newspaper article relating to a dispute over a cricket match on the Heath between 'Chinkford' (Chingford?) and Dartford in the year of 1724. Kindly supplied by Perran Newman from publication Highways and Byeways in Kent by Jerrold (1907) 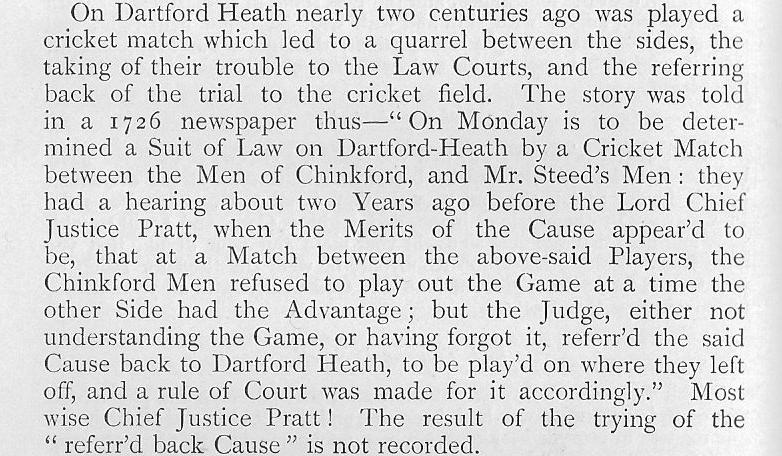 1780 The Army Camp - referred to in the Napoleonic Army Cmp.

1787 Royal Society of Kentish Bowmen moves from North Cray to Bowmans Lodge on the north side of the heath - later referred to.

1811 A customary tariff of 4d. per load of gravel and 6d. per hundred turf's was levied each time materials were removed from the heath.(Presumably paid to MORGAN - Lord TREDEGAR - who had manorial rights to the heath)

Below - Gypsies on the heath 1869
Copyright unknown 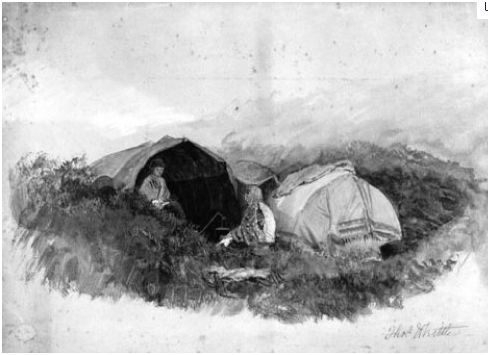 c.1874 Restriction limited to the amount of natural materials that could removed from the heath in any one year. Natural materials ( gravel, loam, turf, sand, peat etc. ) could only be supplied to residents of Dartford, Wilmington , Bexley and Crayford. This is already covered in the chapter relating to the history of Baldwyns and is described in the action taken by MINET v TUBBS.

1882 In 1882 a letter was published in The Star expressing concern at the general state of the heath which attracted visitors from Plumstead, Woolwich, Greenwich and other parts of London, as well as the local people. The letter mentioned efforts made by Lord TREDEGAR and local inhabitants to raise sufficient funds to pay for the services of a keeper. A keeper was appointed to discourage the unauthorised extraction of gravel, peat, loam and turf. It was reported that the loam was being dug out and carted to places as far away as Hertfordshire. 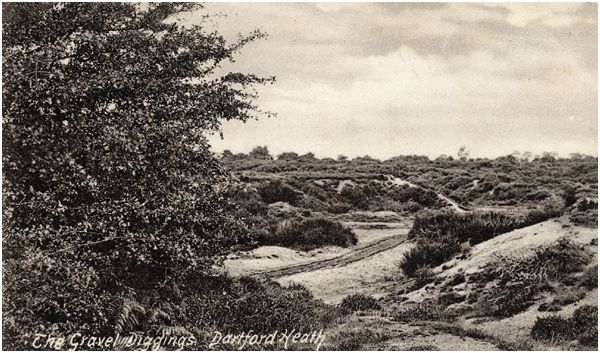 Below - the sandpits - note Leyton Cross houses in the background 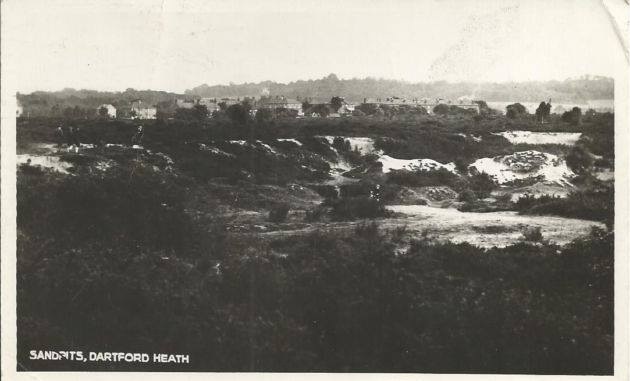 Below (Courtesy of Brian Porter)
THE MOLES HOLE
We believe that the map below this photograph shows the location. 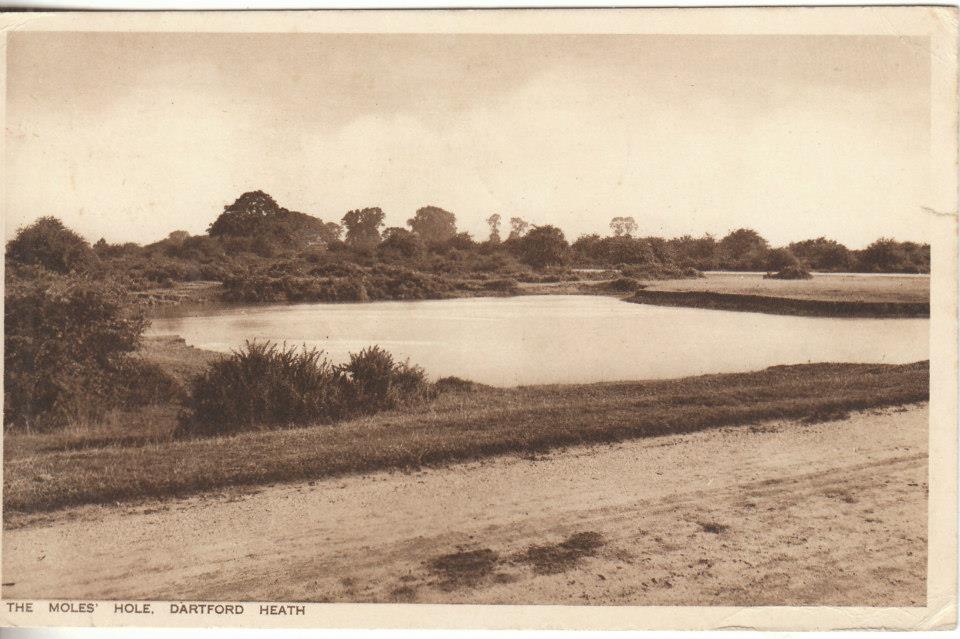 The below O S Map dated 1898 showing a blue 'pond' believed to be The Moles Hole. 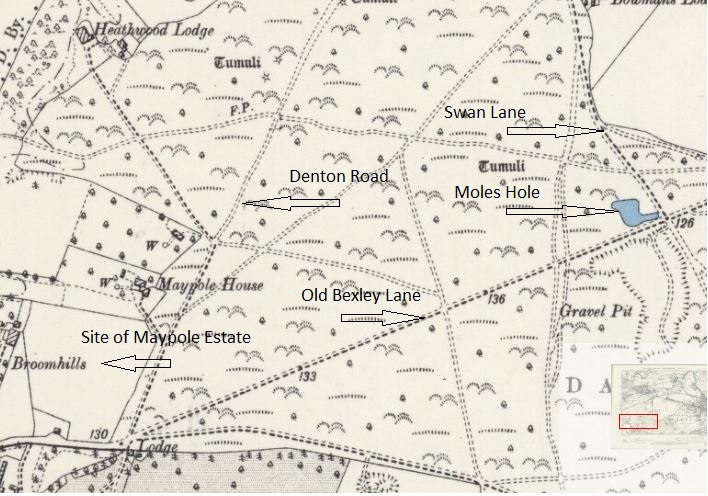 Below from Brian Porter - note Bexley Hospital Tower in background. The angle of the shot indicates the photograph was taken in the vicinity of Heath Close and the 'Glory Bumps' gravel workings. 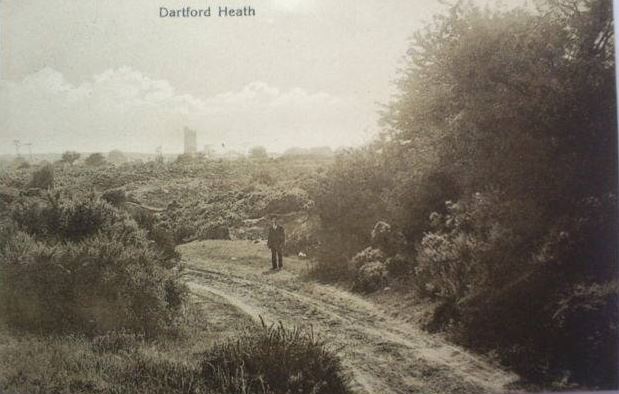 1907 A geological excursion to Crayford and Dartford Heath was organised on Saturday, May 11th 1907. A report states that this excursion mentions the mounds found on Dartford Heath. These mounds were investigated by the late well known archaeologist, F. C. J. SPURRELL ( presumably in the late 19th century ) but nothing was found inside them. The excursion report proposed the idea that because implements, hearths and gold ornaments had been found nearby, some connection might exist between the mounds and a prehistoric settlement on the heath ( this has never been proven C.R.B.).

1925 In 1925 Dartford Urban Council obtained Manorial Rights from Lord TREDEGAR for the sum of £1000. This was, no doubt, influenced by the Law of Property Act 1925. This Act limited the amount of 'Common Land' owned by a Lord of the Manor to be fenced off and used for monetary gain etc. Once the Heath was no longer economically profitable, it would no doubt, have been a financial burden to the owner. Therefore the charitable act of selling it to the Dartford Council was a very reasonable option.

1927 Bye Laws relating to Dartford Heath were introduced.
1930 - murder on the heath.
1934 H. F. BURTON, F.S.A. of University College London and L. C. TOMLIN excavated a number of mounds on Dartford Heath in the summer of 1934. Nothing of historic interest was found, but their excavations proved fairly conclusively that the 'earthworks' and 'hut circles' belonged to the late 18th. century ( The Army Camp ? )
1935 Survey of features on Dartford Heath by E. L. MANN and D. G. GRANT-KING. ( Museum Collection )

1970 In 1970 plans were drawn up to convert Dartford Heath into a 'Country Park'. At this time the heath comprised 340 acres. 1971 In 1971 the North Kent Wildlife Preservation Society were involved with plans to establish a 'Nature Park' at Dartford Heath. 1987 Plans are being considered to increase the appreciation and use of Dartford Heath.
Below - Horse and Groom Public House, Leytons Cross - date unknown
Courtesy of Brian Porter 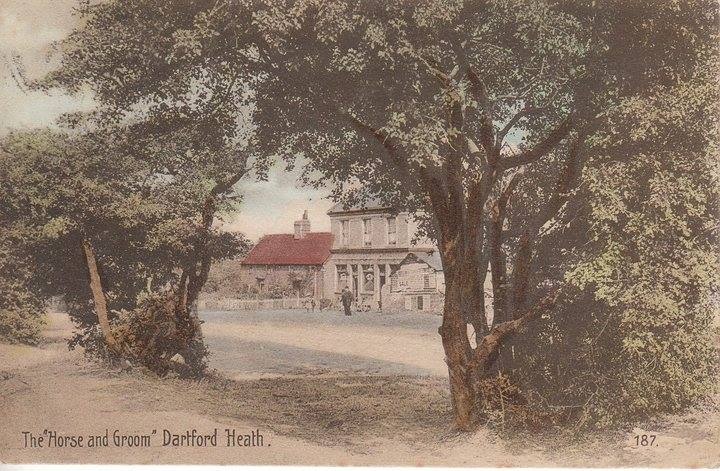 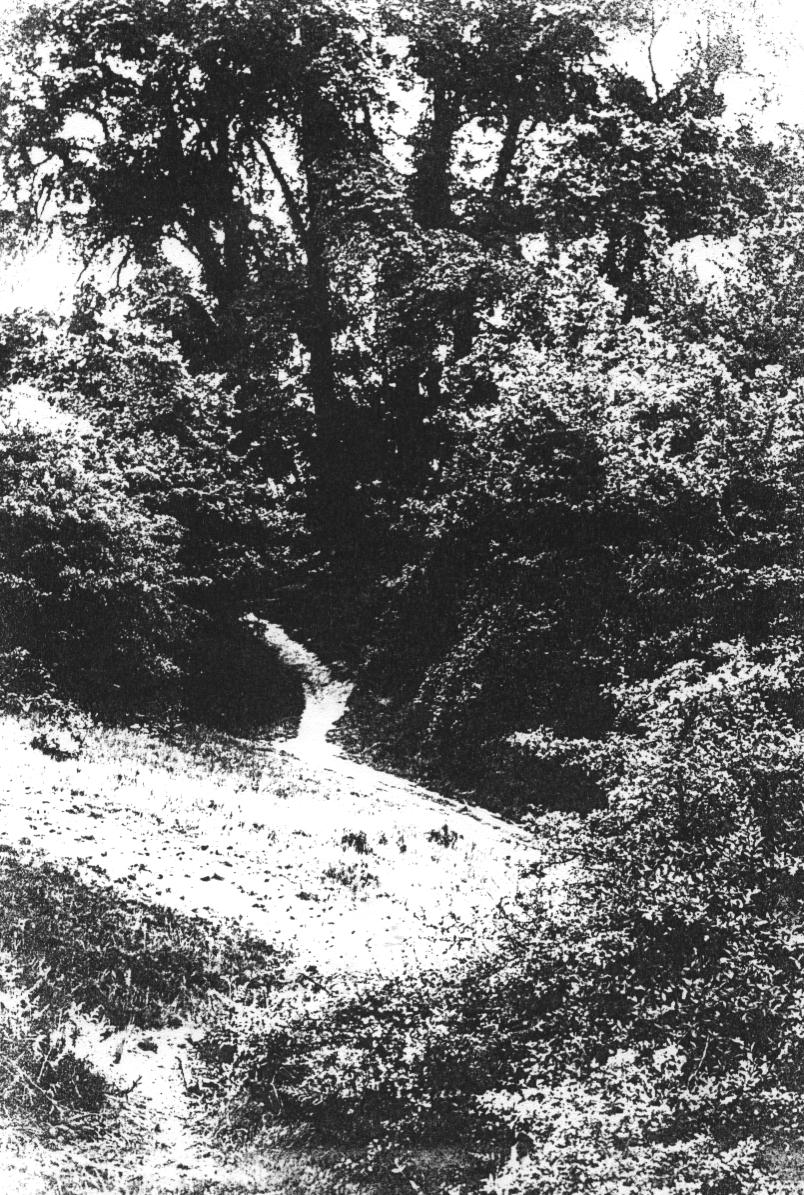 Below - another view c1930s looking towards Coldblow Crescent and the Stile 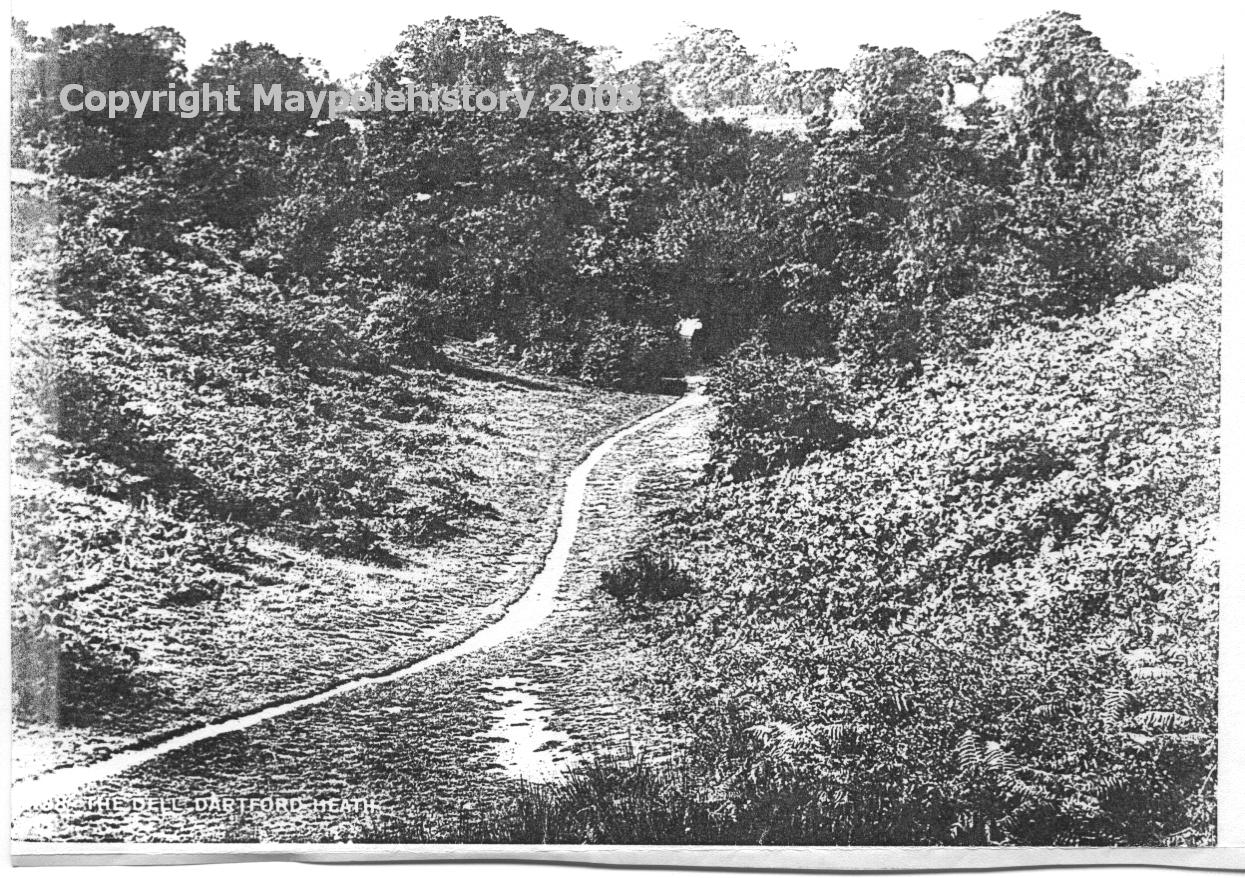 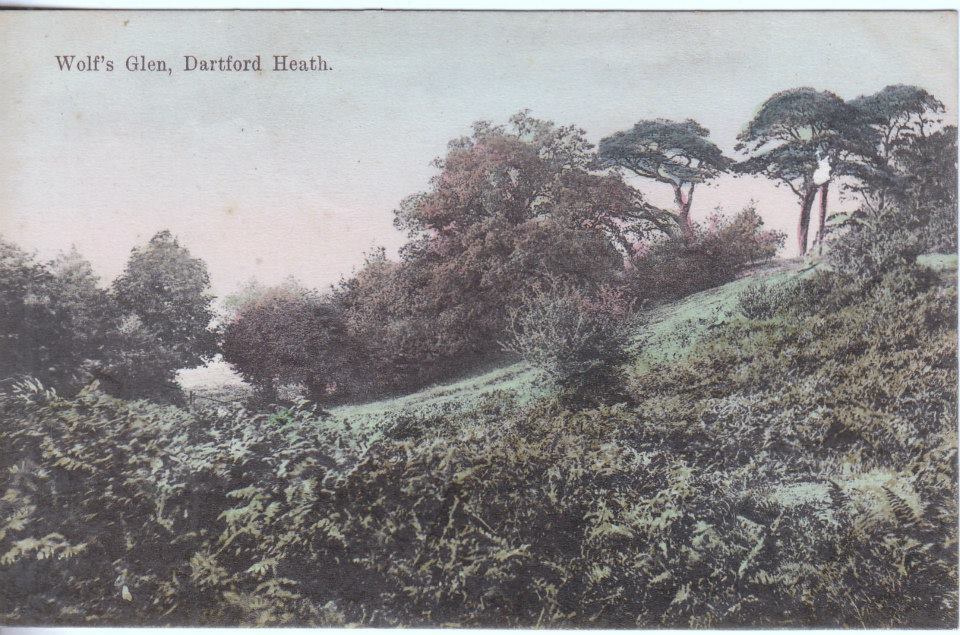 Below - poss same view as above c1890 ? But definitely described as Dartford Heath.
(Possibly 'The Dell', towards Coldblow, Bexley ? or 'The Paddock' looking towards the location of the Black Prince) 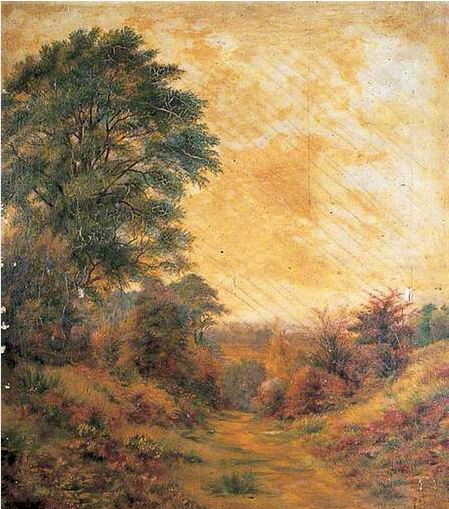 below Dartford Heath (Unknown location) by Youens c1892
possibly Rowhill in the background. 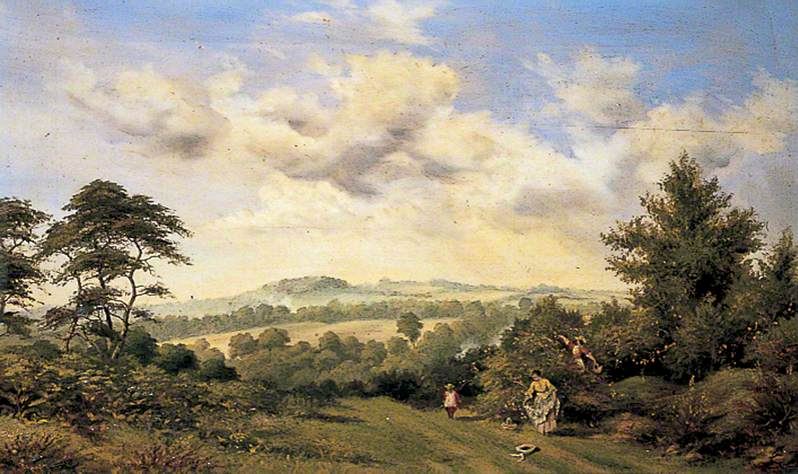 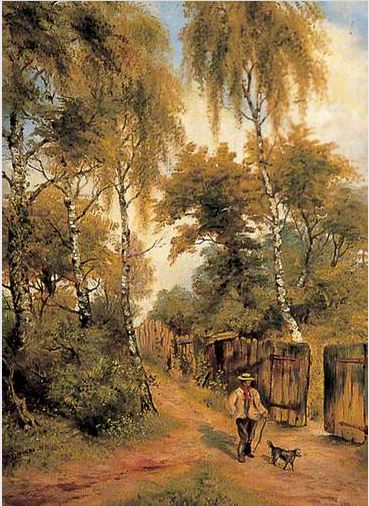