Courtesy of Facebook Joydens Wood Remembered group - Rhona Lee
The discovery of medieval buildings in Joydens Wood.In 1957 an emergency investigation were undertaken by P.J. Tester and J.E.L. Caiger within a well-known square earthwork,situated at the corner of the junction of Joydens Wood Road and Summerhouse Drive. The excavations were quickly undertaken, with help from their friends and a few members of the Kent Archaeological Society, due to the sites impending destruction by the house building planned to take place there.
The main result of the works was the discovery of chalk and flint footings of a medieval hall flanked by two smaller buildings and a well. The positions of the buildings relative to the earthworks and two other structures revealed by previous excavators, carried out in the 1920's and 30's, are shown on the first diagram. The landowners who permitted the digging were Mr. J. Stevens and Mr. A. Seagust.
The medieval hall ( a rectangular building, 62 ft. long and 30 ft. wide externally ) may very likely have been the manor house of the lost Manor of Ocholt which belonged to the Abbey of Lesnes, the ruins of the latter are situated in Abbey Wood.
The well was almost certainly related to the medieval occupation of the site, in spite of a persistent popular belief in its Roman origin. Eighty years earlier it was noted by F. C. J. Spurrell to have been over 100 ft. deep, though by 1958 it had been filled to 75 ft. The upper part of the shaft, which was 3 ft. 9 in. in diameter, was steined with flints for a depth of 26 ft. in order to retain the Thanet Sand through which it passed before entering the underlying chalk. A great deal of the lower part of the original steining had collapsed into the shaft in recent times. No doubt this well was the chief source of fresh water for the medieval settlement.
A remarkable feature was the apparent shortness of the period of occupation of these buildings. This was established to be c.1280-1320 through analysis of pottery pieces found on the site. Why the settlement was deserted is not certain; failure of the water supply, rapid impoverishment of the sandy soil in the surrounding fields or the Black Death (1348) are possible explanations. Nothing was found to suggest destruction by fire or similar calamity.
Unneven patches of brownish-green glaze occurring on the underside of roof tiles ( a great quantity of which where discovered about a foot below the land surface at the time) suggested they were likely to have been made locally. Lenses Abbey owned a tile kiln on the adjoining Manor of Baldwyns in the early 16th century and Tile Kiln Lane takes its name from this fact. The third diagram shows drawings of a few of the tiles found. Some of the pottery sherds found were identified as belonging to 'grey ware' produced in the Limpsfield area of Surrey; such Limpsfield ware was supplied to London and northern Kent, having also been found at nearby sites Cray House and Eynsford Castle. Other finds other than pieces of tiles and pottery (from cooking pots, dishes and jugs) included fragments of painted glass, iron nails and an iron door bolt.
Below left - site of excavations. Below Right - site in detail 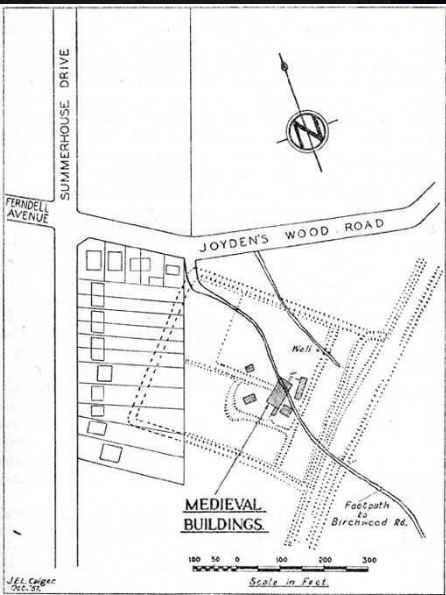 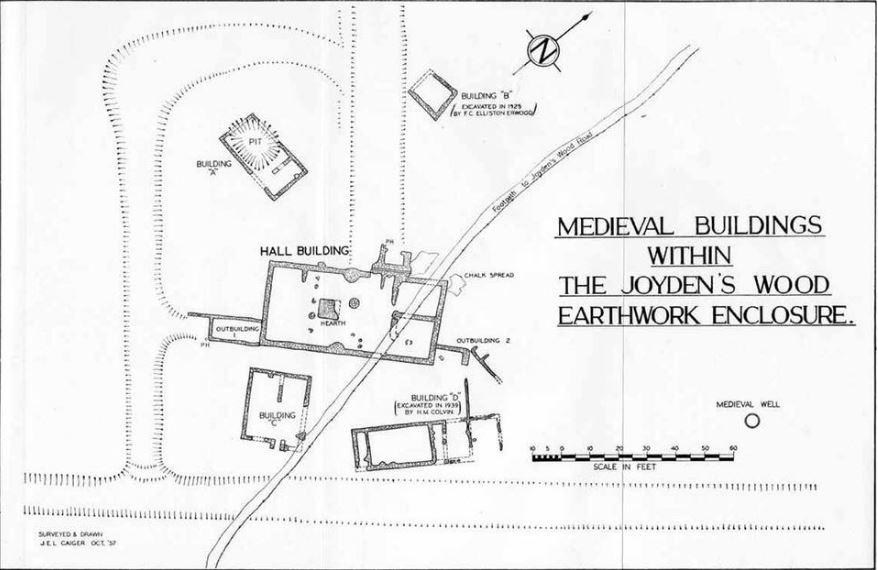 Below is how it is today 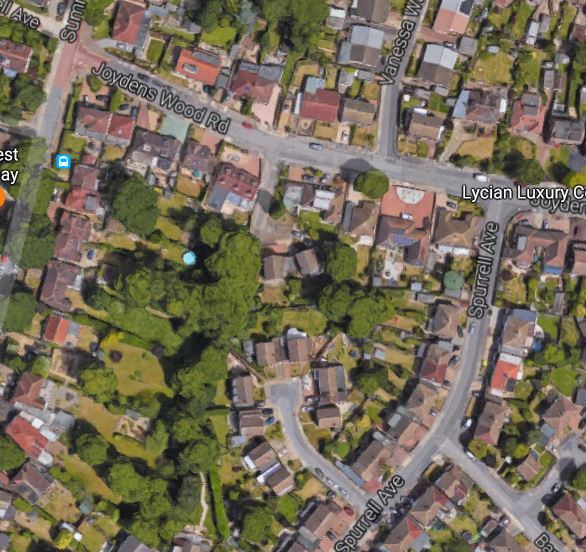 Below - tiles from the excavations 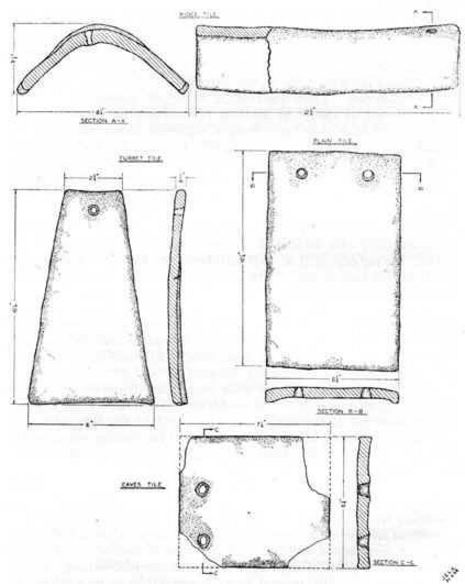