My father and uncle were builders.Young&YoungDartford They bought 20 acres of woodland and orchard adjoining 100 Summerhouse drive.. My family moved into 100 in 1948 long before the hill was paved and S H Drive terminated at No 100. A new government threatened to put a land tax on forcing the sale of the orchard and part of the woods, now known as Woodlands Park. During 1962/3 100 was demolished and the garage built and run by my sister and her husband. After a family feud my father and mother ran the business until ill health forced it's sale. So, I was in Joydens Wood during all the developments and can pretty well tell you who did what. Please don't hesitate to ask.
I was about 13 at the time and very friendly with a boy, Ray Spencer who lived at , I think 91 SHD. Ray was about 18 months older than me and dad always said he was a bad influence on me. Behind Ray's house deep in the woods was a house belonging to Miss Nugent and her sister. They were an old couple and somehow trusted Ray. In front of their house was a lovely lawn but it became a home for a family of moles. Miss Nugent asked Ray if he could clear them and Ray, being an experimental type, agreed. In those days one could buy Calcium Carbide in small rock pieces. I remember it came in a tube similar to Pringles. When mixed with water it gave off an obnoxious smelling gas. The boys at the Maypole school used to put it in the urinal channel for a laugh. Well, Ray and I put a load of this chemical down the mole holes and let it filter through. Then Ray had the bright idea to see if it was flammable not knowing that the gas was Acetylene. Of course it lit to the great amusement of us both. When a gas and air reach equal quantities it is an explosive mixture. The moles were no more and repairs to the lawn were required. Ray went on to blow up cans and allsorts I had no further part in his escapades.
I did say I would tell you about Nov.5th at 100 Summerhouse Drive (SHD) when I was 11-14. The clear patch behind of the dog (Rusty) near the shed, is about where the gardens of 110-112 SHD are now. 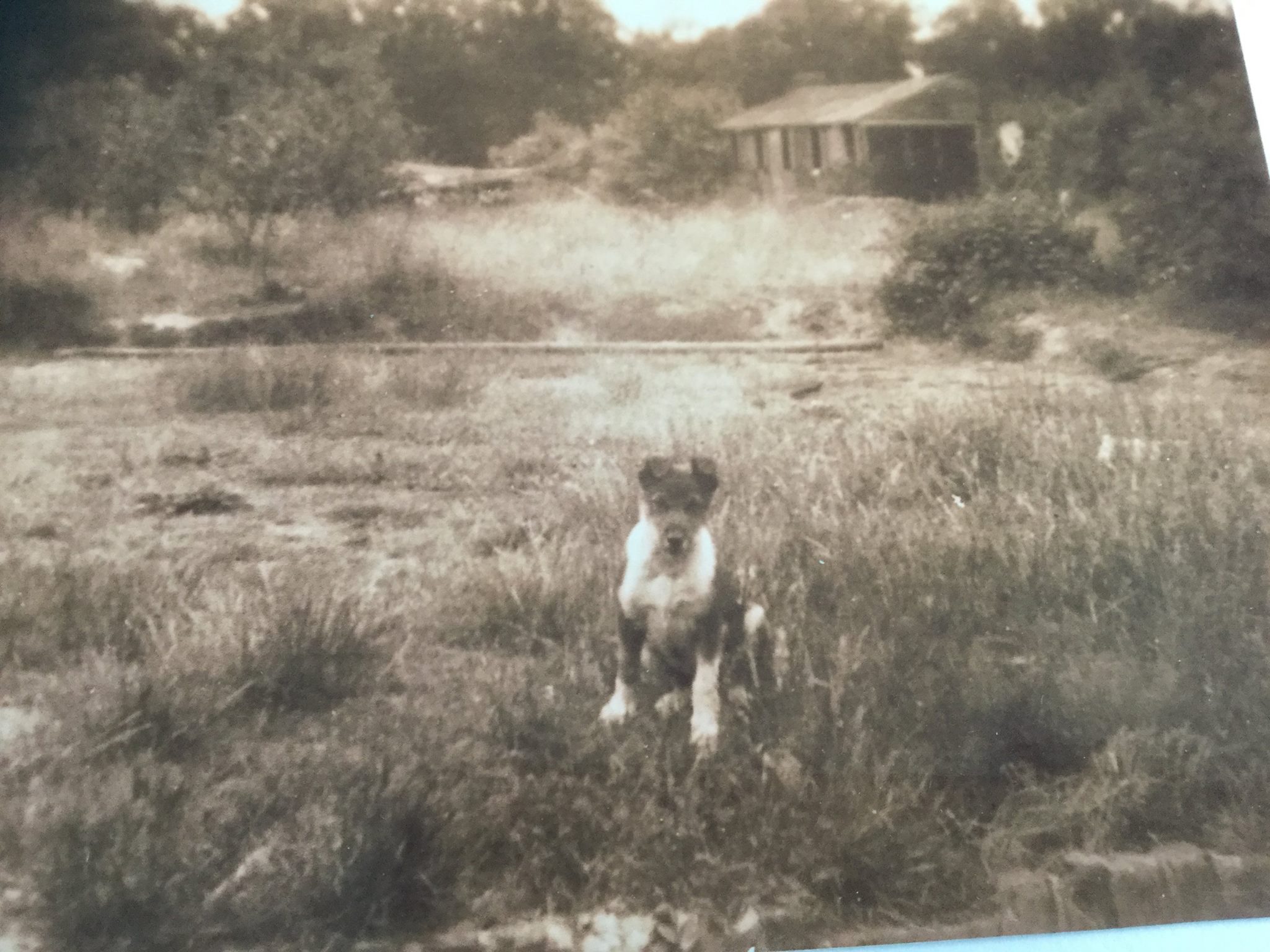 The morning of 5th was hectic as my elder brother and myself would cut down a Silver Birch about 10-15ft high, de-branch it, dig a hole and plant it as the centre of the bon fire. Then stack the branches (From my years logging) around it ready for the evening. We did this to ensure there was no wild life in the dead branches. My father (A builder) had either constructed or extended Dartford Cardboard Box Factory who supplied Wells fireworks with packaging, say no more! Mr Martin from the pig farm, now Norfield Road, used to bring a suckling pig which dad had to clean in our kitchen (what a stink) and we'd roast it on a sort of Bar-B-Q dad made. This was always ready by the time the bonfire was at its lowest and the fireworks were done. Crust rolls and hot pork, devine. My elder sister was friendly with the football team from Oakfield park and they used to walk to our 5th party (every body was fit then) Many residents of SHD attended and it was always a great evening. The pig was roasted over chippings from my years logging and bark that had come off the logs when they were split. Do I wish I could turn back the clock?
This is sadly the last picture I have, maybe my sister can come up with some more, I hope so. It was taken from the rear garden of No102 SHD looking up towards 116-118 SHD. The large shed was roughly in the back garden of 105 Woodlands Park. The shed housed a large one cylinder horizontal petrol driven saw bench with a blade around three feet in diameter. It was my job to cut down the trees with an axe, de-branch them and haul them into the shed for Dad to log. Then I splitthem, loaded them onto a large two wheeled cart and lugged them to the shed attached to the house. No wonder I was the biggest chap in the school! In the clear patch we used to have our Nov. 5 bonfire from the branches. I'll tell about that another time. On the left of the Shed as you look at it here there was a massive bomb crater, yes Nos'116 & 117 you would have been blown to Kingdom Come. The mounds of clay that were blown up were Red, Yellow and Blue pastel shades. Oh yes, the dog is Rusty
Baldwyns Park shops as I knew them. 1948-61 Lau's Kitchen=Fish and chips and wet fish. Cuave=wool one side and hairdresser the other, Modern screws=Co-Op groceries, VTS=Co-Op Butchers, Wines & Beers= Papers & Sweets, Top Notch (Built by my fathers co.) = Groceries, Beauty Box=Not there when I was. On the other corner was an Off licence come Grocers. Remember there were no Supermarkets then hence the number of Grocers. I did my paper round from this news agents.
This pic below was taken from the back garden of 100 SHD looking down past the front of the house to the top of the hill. This was truly living in Joydens Wood. 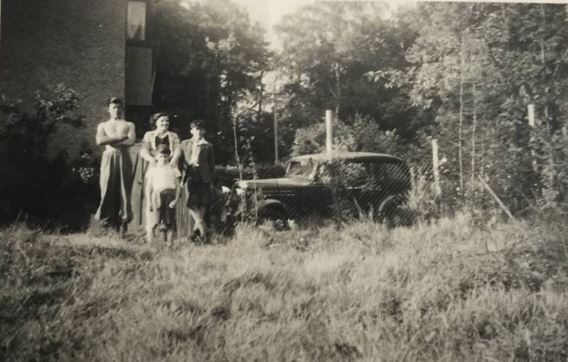 This picture below is the start of Woodlands Park. 100 SHD is in the background and it depicts the grubbing out of roots to make the road wider before the main drain was installed.My sisters are standing where now is the corner of SHD and Woodlands Park. My tall sister Diane has her back to Woodlands Park and the house is now the garage. Hope this is clear. 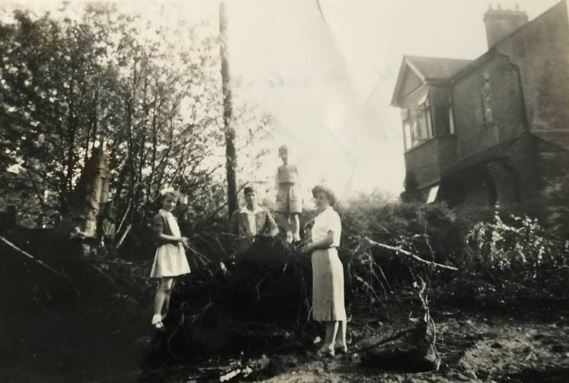 Young'sfamily photo below. My father on the right, his brother on the left holding the child. These two men are responsible for the development of Woodlands Park leading to the development of what is now the Joydens Wood Estate that all residents enjoy. I am on the extreme left.This pic was taken at the rear of 100 SHD where now stands the garage. Before the building of Woodlands there was no main drainage from Ferndell up the hill. All were on septic tanks or cess pits. It was only when the main drain was brought up the hill that enabled the remaining development. 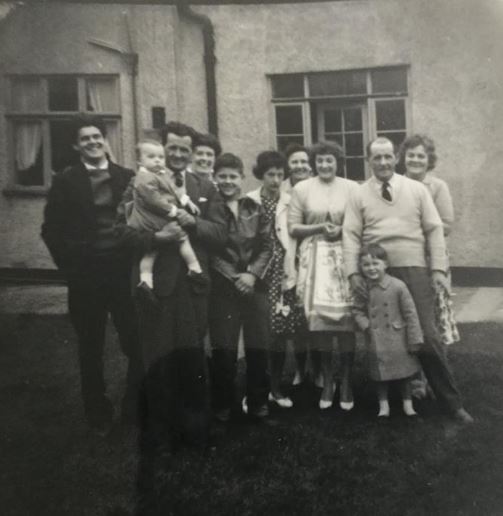 Before I left school there was a fire in Joydens Wood at the far end of what is now Eden Road deep into the wood. The Fire Brigade had their hose connected to a hydrant outside No 91 SH Drive. My mother at No 100 was trying to get dinner for us 7 kids and my dad when the water went off due to the Fire hose taking it all. She moaned and I went to the Hydrant and turned it off for a short while. Boy was I in Hot water when the Fire Chief came running to see why they had no water.
This photo below was taken outside No 100 SHDrive, now the garage looking towards what is now No105 SHDrive This was the end of SHD on the right of the pic were the gates that went to the pig farm now Norfield Road. 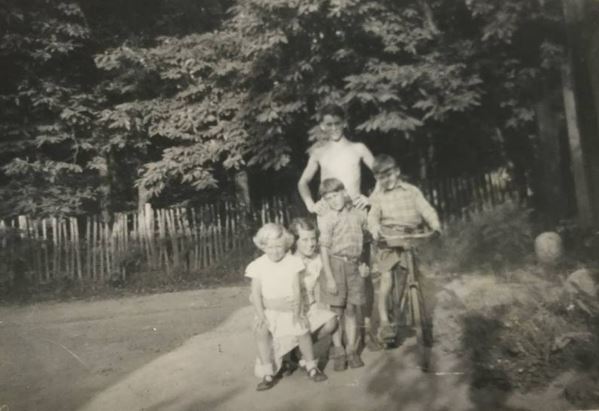 This is a photo below of the drive entrance to "Hill Crest" now I believe is 77 Spurrel Avenue. It is where Greenwood Road meets S H Drive. 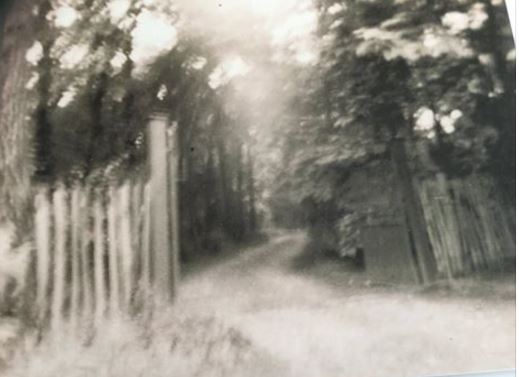 "Driving Miss Nugent" The following couldn't happen today but let me take you back to 1951 and emphasize the remoteness of Joydens wood in those Halcyon days. As I told you before, the Nugent sisters lived in a house deep in the woods behind which I think is No.91 SHD. My friend Ray lived at No 91, his father sold the Nugent sisters an old Morris car. All I can remember of this car was that it had four hydraulic jacks, one on each wheel, for changing the wheel. A good idea that has been lost I believe. Neither of the sisters could drive and so Ray said he would teach them. Bearing in mind that Ray was no more than 14 and a half. Somehow I got rowed into this nonsense. It went like this. We would start at the Nugents house with one of them driving, after a few lessons we would get out onto SHD with me in the front and Ray in the back seat. Down SHD and into Joydens Wood Road which was as I recall like a cinder track. Ray would indicate to me by putting up the appropriate number of fingers which gear Miss Nugent should change into. I know not how long this went on for or whether either one past their driving test, Suffice to say my father got wind of it.