It started with a bang - quite literally. My father fought and was disabled in the First World War. He was not actually discharged from military hospital until 1920 and consequently took little part in the second. He was, however, because of his disability, allowed the use of a car and it was in this car, a very battered Hillman, that he collected us from rural Cheshire in the winter of 1944 to bring us down to live with him again at Heathwood. We had spent most of the war years apart as he had been transferred by his company to the factory in Erith and felt it too dangerous for us to accompany him whilst the bombing was still on. We had spent those years oblivious of the sights and sounds of the fighting. When we were approaching the heath, we encountered a very thick fog which got worse and worse the closer we got.; Eventually it became too dangerous to drive any further and we pulled into a pub for some refreshment and to decide what to do next. I remember it vividly as it was my first experience of bottled lemonade! When the bottle was opened I marveled at the stream of bubbles coming to the surface and the taste to me was exquisite. My mother was all for staying overnight at the pub but my father's will prevailed and we started out on foot with a suitcase of overnight things. 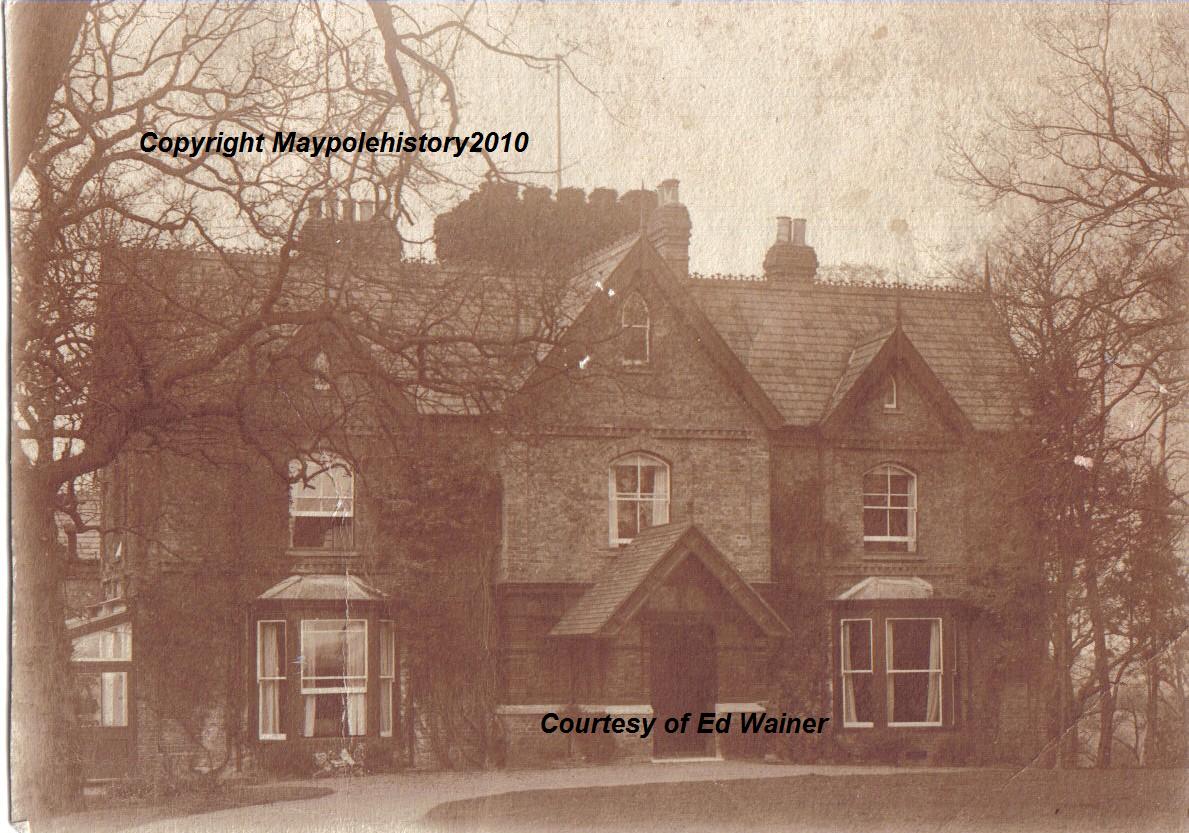 I wonder that he found his way at all as the fog was so thick but eventually we moved on a path over some heath, passed though some big white gates and along a gravel drive until we were suddenly overshadowed by what appeared, to a small boy, to be the most enormous building. Though the porch and the front door and into the cold dark house.

We were getting undressed to go to bed when it happened. The most enormous explosion that rattled the windows fit to bursting. We children were really scared as it came totally without warning and was something previously unknown to us. My father explained that it must have been one of the new V2's which arrived totally unannounced. There was nothing more, so we went to bed.

My father returned to the pub the next morning only to discovered where the thing had landed. The car was only superficially damaged but the pub much more so. Perhaps it was a happy omen for the contented years at Heathwood which followed.

We didn't own the property. It was actually owned by Captain James and his wife who retained part of the house for their own use. The Jameses were very private people and to tell the truth we hardly knew they were there. I was discouraged from playing on what must have been the west side of the house (where the conservatory was) but this was no problem at all as there were fourteen acres of woodland altogether. There used to be more I had been told, but the old Dartford by-pass trimmed some of it off. I can recall visiting the James's side of the house on only two occasions - the first to the conservatory, which had a black and white squared marble floor at the time, and the second time to their kitchen which was warm and cosy as there was an Aga installed.

There was a lodge and a garage in addition to the house. The lodge was occupied by another couple. I don't remember their names for certain but Whitehead seems to ring a bell. I was never without an air gun at that time. First a Diana, which was quite tiny and suited my size at the time. after, I graduated to a BSA Major; a real air rifle and my pride an joy. As you can imagine, I spent a lot of time outside. I remember all the squirrels drays, the smell of the gorse on the heath during the summer and the annual fires where kindly firemen allowed us to "help" and hang around the fire engines. One of my most exciting memories were the Bren gun carriers which appeared from time to time and the one occasions we were given a ride by the soldiers!
There was also a sort of grassy bank on which the scouts used to camp every year. We used to visit whilst we were there. Whether that encouraged my later joining the local cub pack, I can't recall. I do remember on one occasion they were stirring what appeared to be custard in a big pot over the fire. It tuned out to be scrambled egg!

We were at Heathwood for VE Day. Great excitement with a bonfire and my cousin, who was staying with us, managed to get hold of some fireworks; the first I'd ever seen. We were also there for the winter of 1947. What a brilliant winter that was. Snow feet deep on the ground for months. A man at my father's factory made us a toboggan. Very professional looking with gave us hours of fun. Less fun for my parents, I'm afraid. When the thaw did come all the pipes had burst. They were mainly lead and offered little resistance to freezing. The bathroom was up in the tower and we had no water there for days.

It was in 1974 that I took my wife and kids to see the fantastic house I used to live in. I warned them that it was likely to be derelict as it hadn't been lived in for years. Imagine my surprise when it wasn't there at all. All that was there was a very large cutting carrying the new road - a great disappointment.

The below is an extract of E Mails sent by Ed regards a strange tower in Churchfield Woods . . . .

The tower as I remember it was isolated in the woods; no other structures around and nowhere near the road. It was built entirely of steel in concrete footings - no brickwork that I can recall. The framework was a lattice work of girders similar to electricity pylons and the platform at the top was an open box of flat galvanized iron sheet in a metal frame. Access was by ladder through a hole in the floor. If I were to guess where it would be on the map, I would put it slightly lower than the 'Chu' of Churchfield. We used to walk to it from the Southernmost tip of the wood, just past the junction of the two footpaths coming down from Wansunt Road. 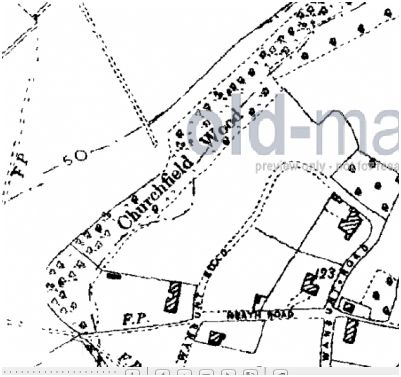 The map is fascinating as it shows both Heathwood and our house at Wansunt Road. All of the houses are represented as if they were terraced blocks whereas, as far as I can remember, all were detached properties. There were only four between the two footpaths; we were at No 1, next door were the Osborn's, who had a furniture retail shop in Bexleyheath, next was Mrs. Chapman, a widow I presumed, who used to send me to buy cigarettes for her - Du Maurier Cork Tipped as I recall. The last house before the next footpath belonged to L. Hugh Newman who was an expert in butterflies. The fruit trees in his garden had branches frequently covered in fine netting; not to keep the caterpillars out but to keep them IN! You will note that there is a gap beyond his house before the entrance to the second footpath. The former owner of all the property enclose between Wansunt Road and the two footpaths to the West, was resident in the small manor house on the southern junction of Wansunt and Heath roads. When he sold the property for the building of the four houses, he imposed a covenant preventing the building of anything on that stretch of land to the North of Newman's house or on the triangle of orchard garden belonging to us. This was to preserve his uninterrupted view of St Mary's Church in Bexley village from the windows of his house! The covenant must have been subsequently overturned leading to the proliferation of new houses as seen today.
Interestingly, the house on the other side of that footpath had a swimming pool and was the home of Dorothy Squires and her husband Roger Moore - yes, the Roger Moore of 'The Saint' and 'James Bond' fame. I remember being in the butcher's shop in the village when my mother gave me a friendly nudge and whispered, "That's Dorothy Squires husband". I looked up to see a tall, extremely good looking, tanned young man - not yet famous in his own right but only as being the husband of a well-known singer!