I was born in Dartford and came to live on the Maypole Estate when I was 2 and a half years old in 1955. I lived there in the same house with my parents until 1982.

See Reasons for this site as another part of Memories of the estate.

The first memories of my life on Maypole Estate I have start at about the age of 4 years old, in the latter half of the 1950s. I lived in Beaconsfield Road. The alley way behind the houses was our playground. Although we would be in earshot of our mothers (who, incidentally in those days seldom went to work, but stayed at home to look after us) we had our very own world away from the grown ups. We played Cowboys and Indians, pilots of rockets to the moon or we could be anything or anyone we wanted to be. It was such a safe environment. This is a far cry from the way I am having to bring up my children in today’s world.

My first friends were Keith Hawkes and Penny Smith from Baldwyns Road. We would occasionally go to the back alley of Baldwyns Road where I met Alan Booth who lived in one of the houses there. He became my next ‘best friend’. As we grew older we would be allowed to play ‘out of earshot’ of our mothers - but always within two or three minutes of our own alley. I rode my first bike down our alley and also ran hell for leather there in my first American Baseball ankle type canvass shoes pretending I was Batman.

As a treat we would occasionally be given some money to buy sweets from 'Vines' the Post Office or 'Barretts' shop. I can remember ‘Jamboree Bags’. These were bags containing a mixture of sweets and small plastic toys. On hot summer days we would buy ‘Jubbly’s’

These were triangular shaped cartons containing orange flavoured ice - if you rubbed them up and down you would end up with a very cold and refreshing orange drink. Sadly, the shape would occasionally mean losing the ice as it popped out of the carton and into the dirt. We also bought ‘Black Jacks’. These were small liquorice toffee sweets costing 4 for a 1d so they were great value. The next favourite purchase was ‘Wagon Wheels’. These were ginormous circular chocolate coated biscuits. They were 4d and we could only get these from the café and mum didn’t really like us going in there because there were Teddy Boys who smoked and played Rock and Roll on the jukebox ! One must remember that our pocket money was only 6d a week so Wagon Wheels were a real treat. We would occasionally buy ‘transfers’ which we would wet and stick on our arms. We enjoyed this because they looked like tattoos.

We played ‘*** cards’. (computer won't accept f a g cards) They were picture cards in cigarette packets and we would place one on the ground then drop one of ours on to it. If it landed on it we would pick them both up. If not the next child would drop one of theirs and if it landed on the two they would pick all of them up - and so it went on. A favourite cheap toy was a water whistle. Rather like a Sherlock Holmes pipe made out of plastic you would add water in the bowl and blow. The sound was a warbling whistle - rather like bird song. Talking of ‘*** cards’ we would find old cigarette packets, fold them up and attach them on the forks of a bike with a clothes peg. We would then place the other end into the spokes so as we rode down Baldwyns Road (The only 'made up' road in the interior of the estate) we thought we sounded like motorbikes. Not a computer or TV in sight. TV’s only really came in a bit later - and then for only a portion of the day.

We eventually ventured on to the heath. This is where my imagination was allowed to explode. What adventures we had over there. The ferns were taller than us and the trees were hundreds of feet high - well that’s how it seemed. You know when you smell the earth or damp leaves or grass it takes you way back. Most of these smells and sensations take me back to the heath. The smells of late autumn, the mist shrouded, dampness in the valley of the Dell. The sensation of running through piled up leaves down the Paddock near the A2. The sound of broom seed sacks popping open in the heat of summer. The magical feeling upon hearing your first real cuckoo in a copse a mile off. The aching thirst after running around in the sun for a whole morning. Hearing the first crack of thunder in the outside world away from the protection of your parents. The glorious feeling of snow up to your waste. The sight of the first daffodils in Spring growing wild in the valley of Heathwood and the pride of producing some picked ones to your mum. The feeling of being in a ‘Hansel and Grettle’ forest in the silver birches near the Sandpits towards Leyton Cross. I can remember the first time I saw mist, in layers, over where the swings used to be and where the camp hole is. It was magical. Like horizontal curtains of chiffon where your head would be above and your feet below and you could only just see them. All of my earliest perceptions started here and on the Maypole Estate. I have carried these through my entire life. This is why I am so very, very fond of the dear old Maypole Estate. My brother and I (the little one) in the back garden in Beaconsfield Road - c 1963. Snow snow and more snow - loved it !
As we became older and more adventurous, so we started taking risks. Not so much risks of health and safety as in today’s society - more a risk of being caught ! The lure and sense of mystery over that fence or behind those locked gates kick started the magnetism of 'civil trespass' in me when I was about 8. It happens to all of us at some stage. My first incursion was into the Broomhills Field, with some mates to stroke the cows. So innocent and so trivial. It was my first positive and pre-emptied wrongdoing. I can remember the cowman shouting at us as we ran away - and my heart pounding as I went back to him. I thought I was going to be sent to Borstal (Homes for delinquent kids) and my family would be shamed for evermore. I was only slightly scolded and, in fact, praised for returning whilst my mates buggered off - leaving me to it. No Borstal. Afterwards I always made preparations for escape - coupled with an excuse if I ever got caught. You see, in those days, Maypole Estate was surrounded by fenced and gated places. Boys have a fascination with climbing, digging, holes, caves, water, trees, birds nests, catapults, bows and arrows and so on. It is in our genes and I knew there would be times when it would be impossible to resist. The next incursion was into the rear of Broomhills by the old Institute Hut. There was an air raid shelter we had heard about from the bigger boys and this challenge incorporated most of the aforementioned activities. Instead of climbing the fence behind Baldwyns Road we decided a safer approach was from the stream by the allotments, that ran form the dip to the A2. We could then go through the bushes along the boundary with Maypole House, past the Cowshed (Nissen Hut) behind Broomhills and along. 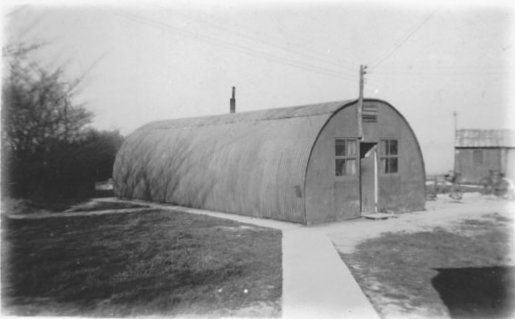 Above - picture of a basic Nissen Hut

The journey was fraught with difficulties - the first and foremost for me was cowardice. The fear of being caught still pervaded. I had promised the cowman I would never do it again. Then, I thought, it is not actually his field I am going back to. Simple in a child’s mind and this, I am sure, is the experience of many of us. You see, I had excused myself already. I had stifled and delayed that all important alarm bell in our heads. We did not venture on to Maypole House property as we knew Mr Stockford would catch us and take us to Mr Winter who had a gun and we would be shot. Much safer being told off by the Nurses from Broomhills. The cow parsley was high and shielded us most of the way. The nettles stung us the rest. We eventually came to this magnificent manmade cave. It was like a holy shrine to our achievement. None of us actually went in the first time as we didn’t have a torch and there must be dead bodies in there from the war. Such is the imagination of kids. The smell of nettles, cow parsley and the sound of buzzing insects always takes me back to this one escapade.
Below - contemporary sketch by Maypoleman 1967 of the air raid shelter entrance. The figures are not using it as a urinal but Kim anda friend entering ! It was known by us lads as the 'Skull' as the two doors were dark and like a pair of eyes. 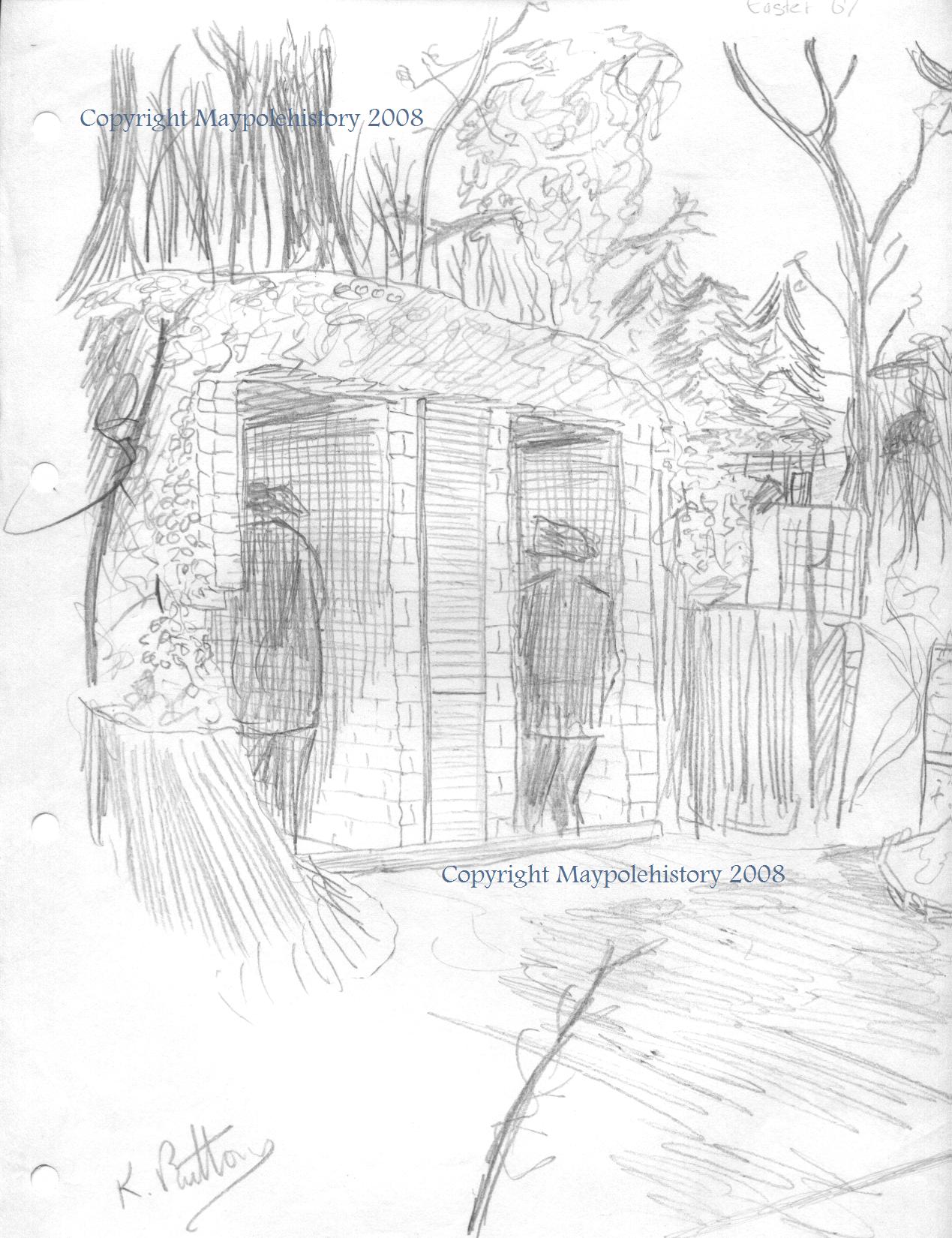 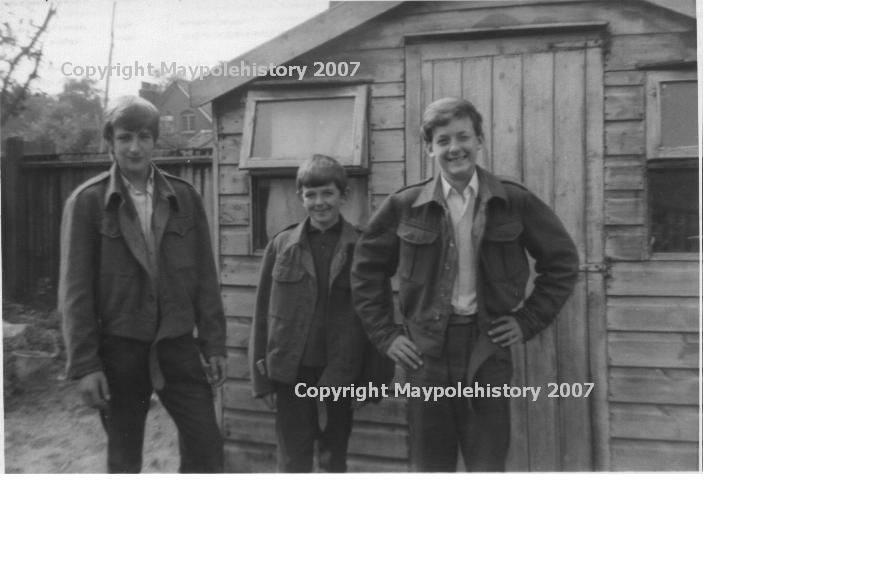 Me on the Excelsior Talisman Summer 1968 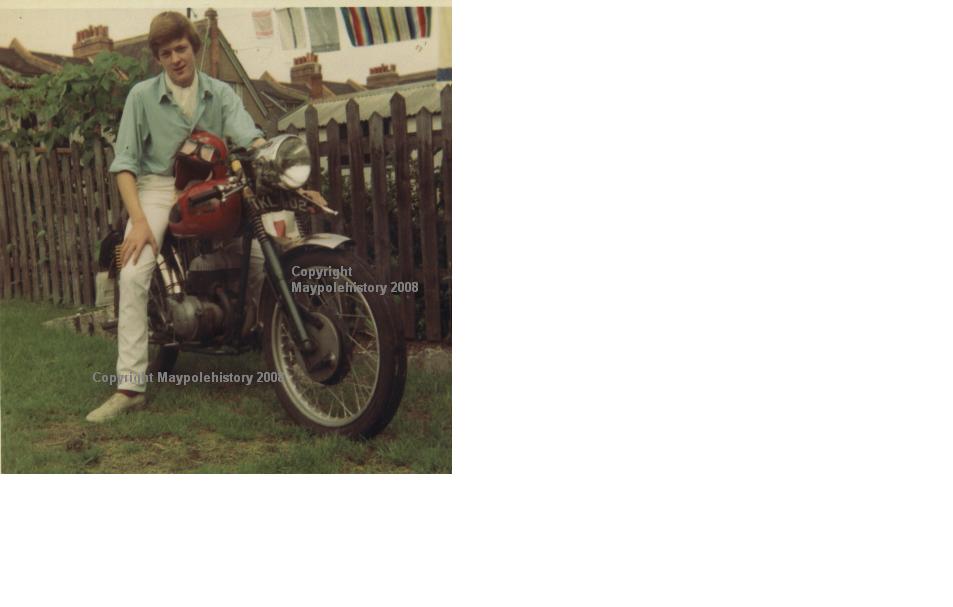