The above engraving (G. Terry) may well be the same as mentionedin the British Museum
(www.britishmuseum.org/research)

Printmaker, map-engraver, banknote engraver, printer, jeweller and bookseller. Engraved seven maps for 'Taylor & Skinner's survey and maps of the roads of North Britain or Scotland' 1776; George Taylor & Andrew Skinner, A map of the county of Louth (4-sheet) 1778; the general map and most if not all of the maps for George Taylor & Andrew Skinner: 'Taylor and Skinner's maps of the roads of Ireland ...' 1778; Richard Cowl, '... this plan of the borough of Plymouth ...' 1779; for Paul Rapin de Thoyras: 'The history of England' 1784-1789; for Harrison: Atlas 1787, etc.
Although said to be aged 73 at his death in 1817, he is almost certainly to be identified with the Garnet Terry, son of Garnet and Frances Terry, baptised at Holy Trinity, Gosport, Hampshire on 21 Nov 1746. Apprenticed (Tinplate Workers Company ) to William Weaver 1761 (£21); married Elizabeth Farrell 8 Oct 1769 (St. Mildred Poultry, London); married again Rebecca Beech 16 Jul 1792 (St. Andrew by the Wardrobe, London). Trading as 'Garnet Terry & [Richard] Batley' 1770. Member of St. Martin's Lane Academy. Examples of his own trade-cards survive (HealCollection), also bookseller's labels promising 'most money given for curious old Hebrew, Greek and Latin Books of Divinity' (Ken Spelman catalogue 1993 - item 415) or 'books in all languages bought and sold' (Guildhall Library; Banks collection); a further Guildhall trade-card describes him as an 'engraver and printer in colours'. Testified as a witness in an Old Bailey trial in 1776, and again as an expert witness at a number of trials for forgery between 1798 and 1805, stating in 1799 that 'I am the engraver employed by the Governor and Company of the Bank of England, I engrave the plates for the one and two pound notes'. This official role contrasts with radical political views expressed in a number of satirical prints of the 1770s, and with the Rev. William Huntington's description of Terry as 'a leveller, and for all things common'. He became a follower of Huntington in the 1780s, publishing a number of his works and earlier apocalyptic text,s as well as devising at least three large-scale millenarian prints (see F. Carey (ed.), The Apocalypse and the Shape of Things to Come, exhibition catalogue, BM, 1999, pp. 217-18 and nos. 15 and 16). At his own expense he built a nonconformist meeting-place in Curtain Road, Shoreditch, where he preached for many years. Died 31 Jul 1817 (said to be aged 73); buried Bunhill Fields. Bequeathed over £6,000 to his chapel, etc. Apprentices: Larkin How 1770; Thomas King 1772; Vincent Woodthorpe 1778; Thomas Foot 1778; Joseph Saunders (turned over to Terry 1785). Three trade cards in Heal Collection. Heal,59.157 advertises "Terry. Engraver. 54 Paternoster Row, Cheapside." Heal,59.159 advertises "Sold by G. Terry, 54. Paternoster Row. St. Pauls. Most money for Libraries or Parcels of curious old Hebrew, Greek & Latin Books of Divinity. Geat [sic] choice of new & old Bibles. Books bought, sold or Exchang'd. Books neatly Bound. New and old Books of Divinity." Heal's annotations on mount similar to above. Heal,59.160 advertises "Terry, Engraver, 29 Paternoster Row, Cheapside, London. NB. Portraits Painted." Heal's annotations on mount sinilar to above. Billhead in Heal Collection (Heal,59.158) states "To Garnet Terry, Engraver & Jeweller, No. 54 Pater Noster Row, Cheapside." and is dated "London March 16th, 1780." Heal's annotations on mount: "Engraved very many Tradesmen's Cards 1780-'93. Compare trade-card of same address in A.H. Collection. Chubb's 'Printed Maps' gives him: - at 62 Paternoster Row until 1777. 54 Paternoster Row 1777-'96. 20 City Road, 1798."

Terry, Garnett; Terry & Batley
Below showing proximety of where Maypole Estate was to be built


With regards to the Heath it is interesting to note that in 1780, whilst Great Britain was under fear of attack from France and Spain, there was a large temporary encampment of soldiersbased upon it. This camp lasted for a few years and the local neighbourhood benefited, hugely, in trade with the soldiers. This camp eventually swelled in numbers to approximately 8,000 soldiers. Remember, these weren't soldiers in camouflage - they would have presented any observer with a blaze of colour. The soldiers would have been under canvas and these tents would have been in neat rows. A contemporary plate, published by T BISH, showed that the Camp was situated between what is now Heath Lane and the vicinity of the gates of Baldwyns Manor (Bexley Hospital). At the height of the camp and situated towards the centre of the heath there was a shop for supplying the troops with stationery and small stores - T. BISH. (The contemporary map of the heath showing the camp also showed their 'shop') The 'Suttling' House - a merchant who follows army camps - stood near Bowmans Lodge and was kept by Mr POWELL of the Granby, Dartford.

The Magazine was situated near the end of Oakfield Lane. There were similar camps at Coxheath, Kent and at Warley Common in Essex. All three camps were uprooted at daybreak on 27th July 1780 and there was then performed a grand review of these troops held by their commanders. These included Lieutenant - General PIERSON, Lord AMHERST, Colonel St. LEGER, other commanders and their respective military attendants. After detailing their :-

the entire army comprising 4 divisions and their artillery then marched off the heath and made their way to Gravesend. The other two aforementioned camps also made their way, respectively, to Gravesend and Tilbury. As a show of force the entire strength was conveyed across the Thames and back within 8 hours. Reports at the time indicate this huge spectacle was witnessed by many people. The 4 divisions then marched back to Dartford Heath and were dismissed at 8.15 p.m. to great applause. "The nobility and gentry who attended (this return) were afterwards entertained by a play called 'The Recruiting Serjeant', performed by the officers and their ladies, in a large marquee; after which, the general entertained them with a supper , and some of the noble visitors did not leave the camp until Sunday".

It was on Sunday evening, 6th August 1780 that there developed a violent quarrel at the camp between a soldier of the 52nd regiment and one of the Northamptonshire militia which 'occasioned a battle in front lines'. Colonel STRAUBENZIE of the 52nd endeavoured to quell the disturbance and was 'exceedingly ill treated'. It was with difficulty that the two regiments were prevented from 'making common cause with the combatants'. One man had his ear cut off; another lost two fingers and some had several 'very dangerous wounds from swords, bayonets etc.' This was the end for the camp. The location must have made it difficult to impose strict military discipline and in September 1780, the camp broke up - to the 'infinite regret of the belles of the neighbourhood'. It is reported that their trade was greatly missed and that 'Desolation reigned around' when they had gone. 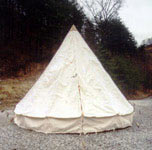 On the evening preceding the break up of the camp a select party of Officers were invited to take a farewell supper with the Ladies of the neighbourhood. One of the attending ladies - a Miss THORPE - reported that "they broke not the bread of cheerfulness, it was but the ghost of gaiety;- for what availed the attendance beaux, to whom our 'Good night' might be forever! and their morning salute accompanied with the groan of (moving) forges - and - still more dismal sound that of departing regiments!" It has been said that traces of this once colourful encampment could still be made out by persons walking on the heath right up until 1840 or so - some 60 years after it's demise. Holes and craters on the heath where tents, marquees and earthworks etc. once were, could still be seen.

I can certainly remember, as a boy, playing in the once abundant heather on the heath in the late 1950s / early 60s and of rolling around in the small circular indentations in evidence at the time. Presumably some of these were the remains of the above described encampments. At the time we imaginative boys thought that they were bomb craters - a relic of more recent military action. Several of the older residents from the estate, however, confirm that they were there before the last war. For generations, a favourite playing place for local children living on Maypole Estate was a hollow on the heath. This is situated on the opposite side of Denton Road to where the Rolex Watch Company is and on the opposite side of Denton Road to where Maypole House once stood. As children, we always knew it as 'THE CAMP HOLE'. The late Winnie BLACKMAN stated that children in the 1920s also used this name for the hollow. Does it have some connection with the Napoleonic military encampment of 1780 ?