Most of the below 'old' images are from the Bexley Archive and the copyright belongs to them. 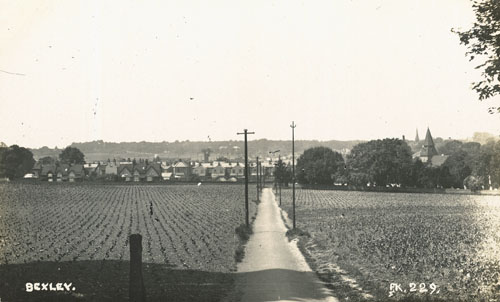 Above - the path from Wansunt / St Marys Roads towards Bexley Village 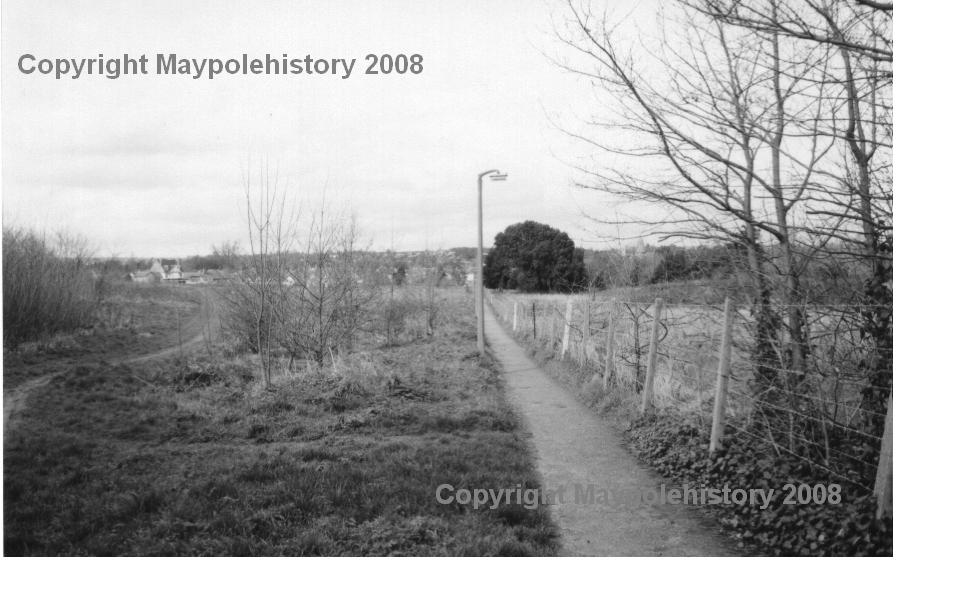 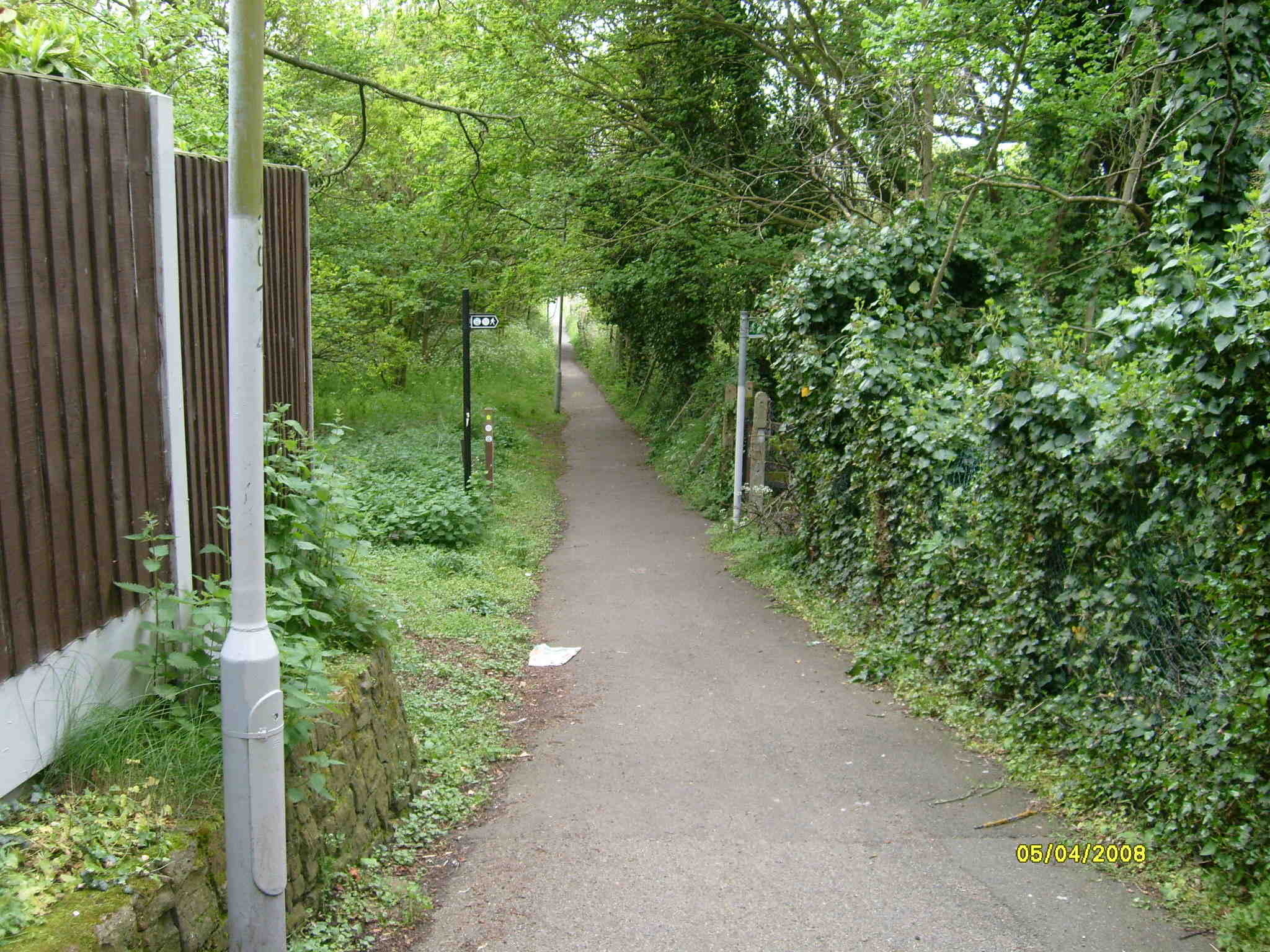 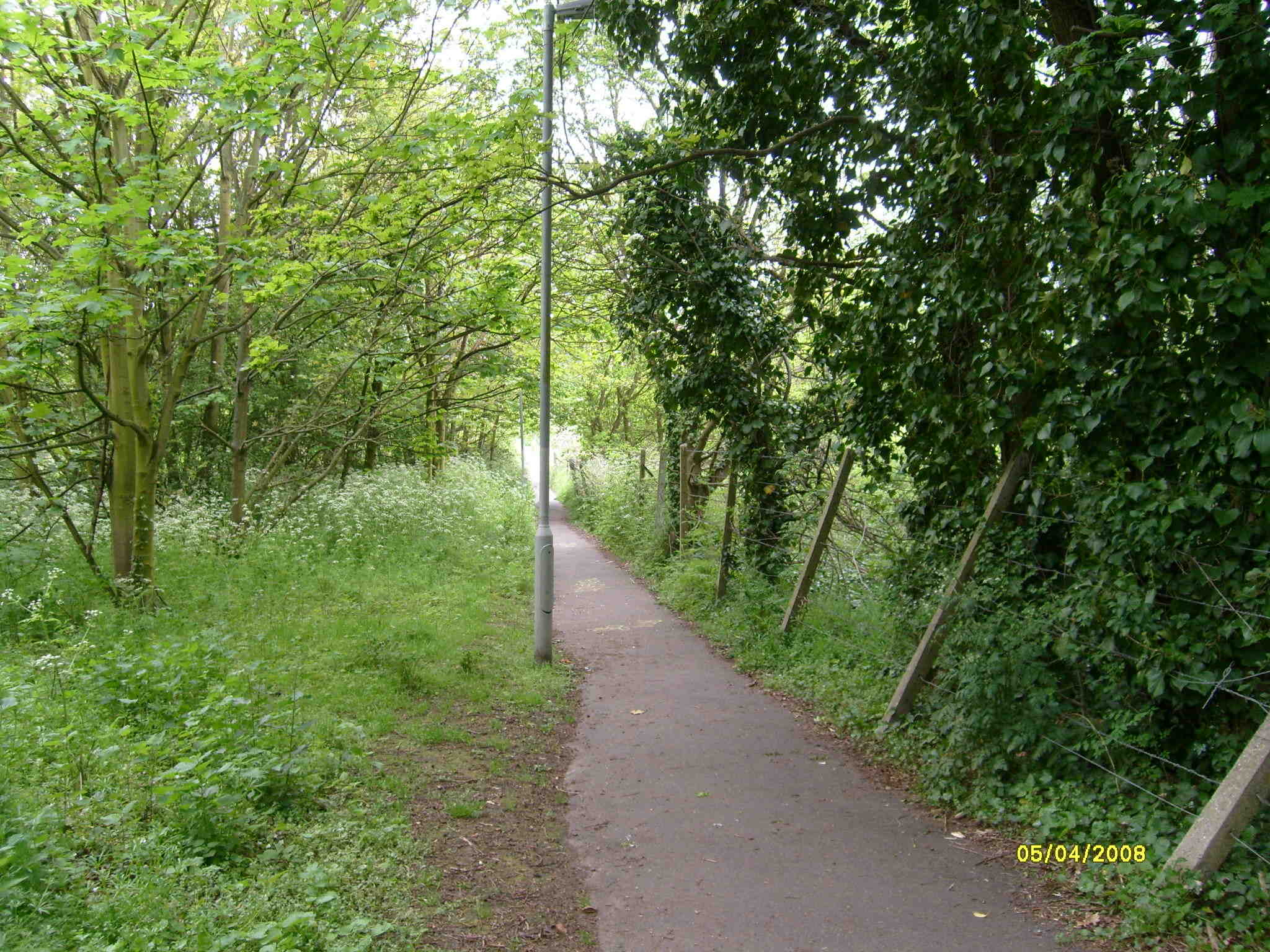 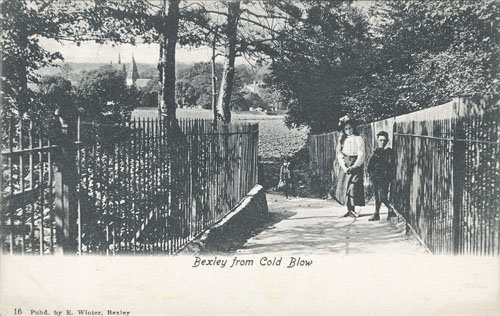 Above - the path from St Marys Road where it joined the path from Wansunt Road - looking towards Bexley. This has been known as 'The Snicket' (Perran Newman) and the 'Chicken Run' (Local name c 1950s)
and how it looks today . . . . . . . 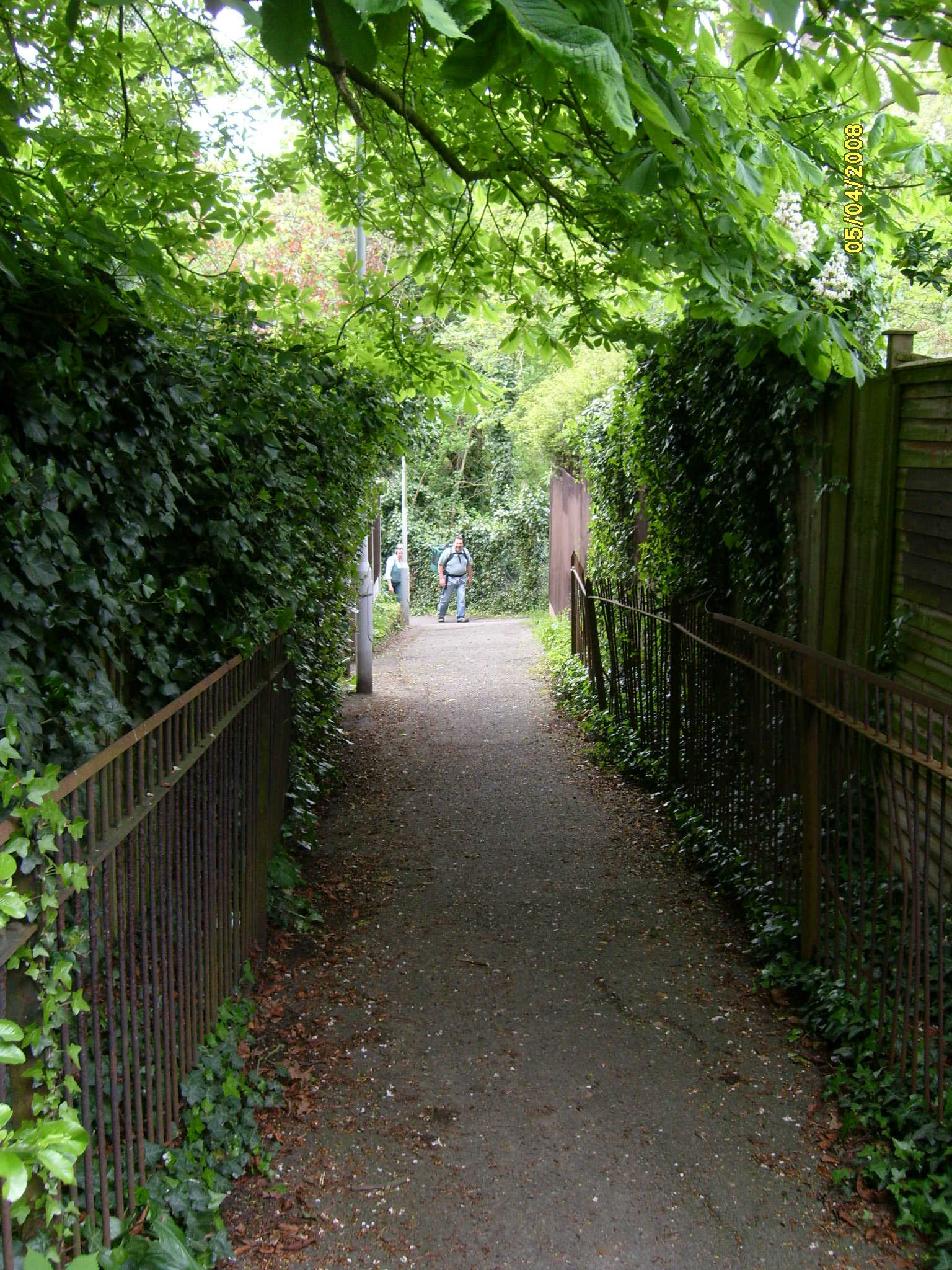 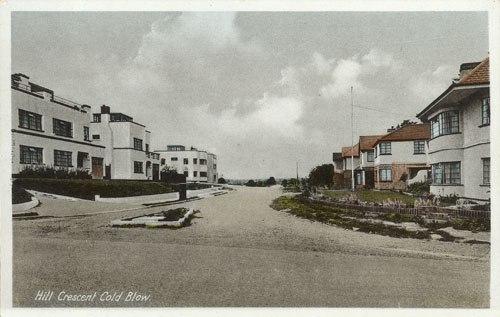 Above - Date c.1936 Description Hill Crescent is at the top of Vicarage Road, Bexley where it meets the Dartford Road


Below - Dartford Road c1900 junction with St Marys and Wansunt. We are informed that the odd looking construction to the left was to do with gas regulation and was a type of 'sub station / valve'.
Also, enlarging the new Wansunt / St Marys development sign doesn't really make the content any clearer - sadly. 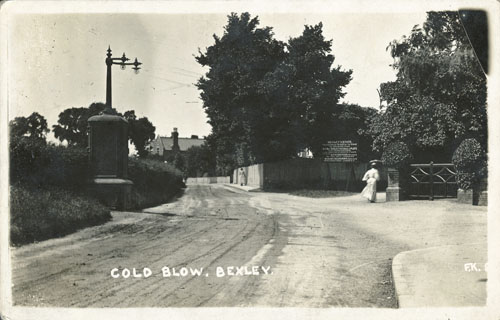 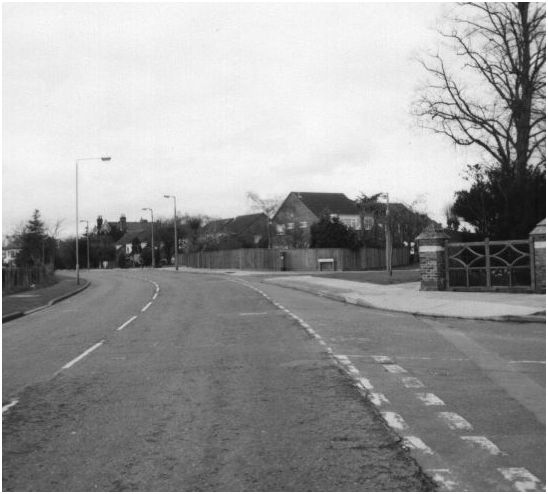 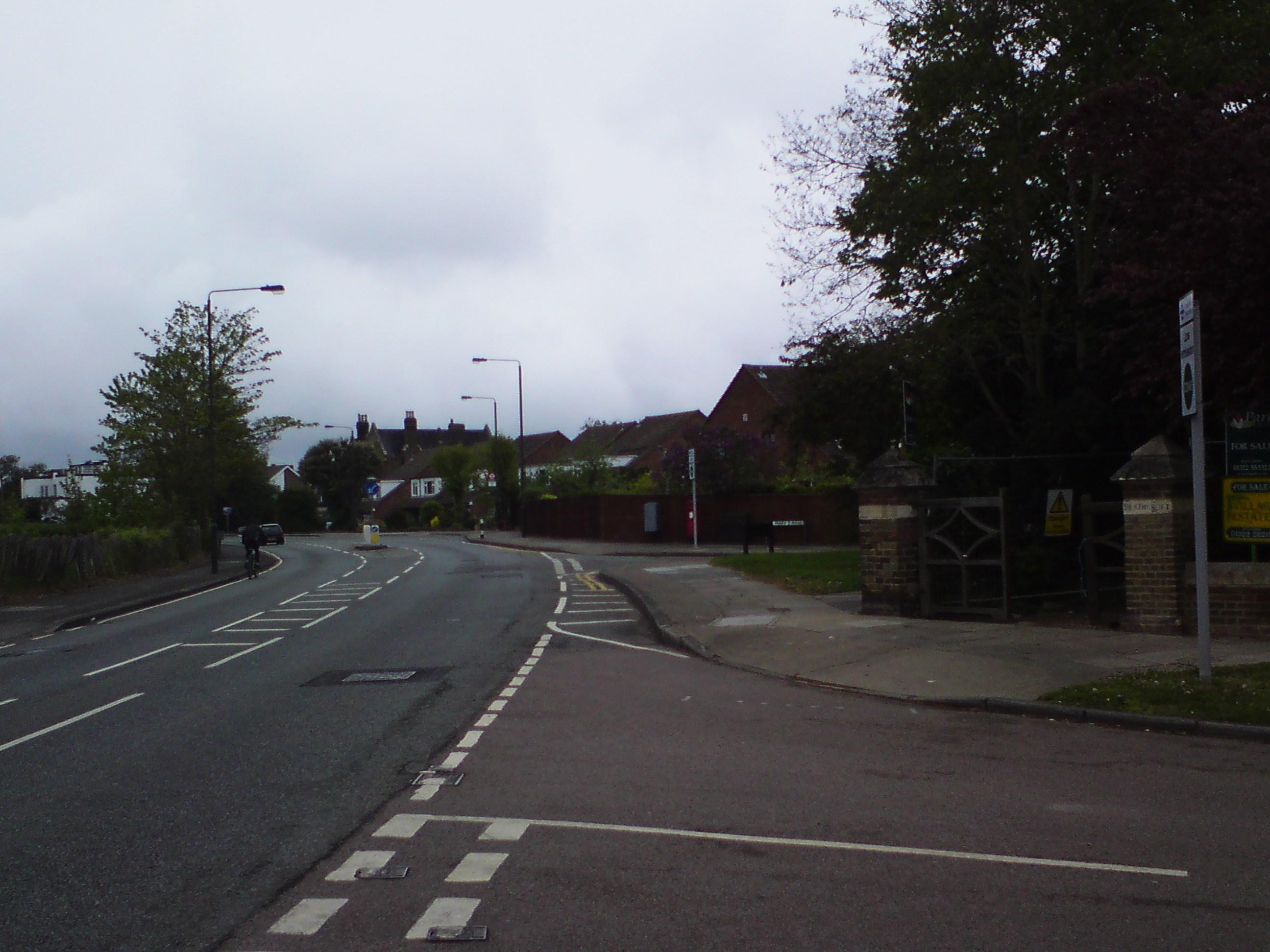 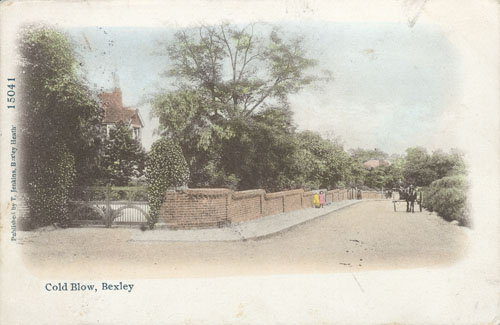 Above - Date 1906 Description Dartford Road, Bexley. 'Mount Eagle' behind the gates ? The area is known as Cold Blow. The view is taken from Wansunt Road (immediately on the left) looking along Dartford Road towards Baldwyns and Dartford Mental Hospital. Children and pony and trap in the road. Correspondence and stamp on reverse of coloured copy postcard. The wall facing the road in the above is the same wall as seen in the below two pictures. 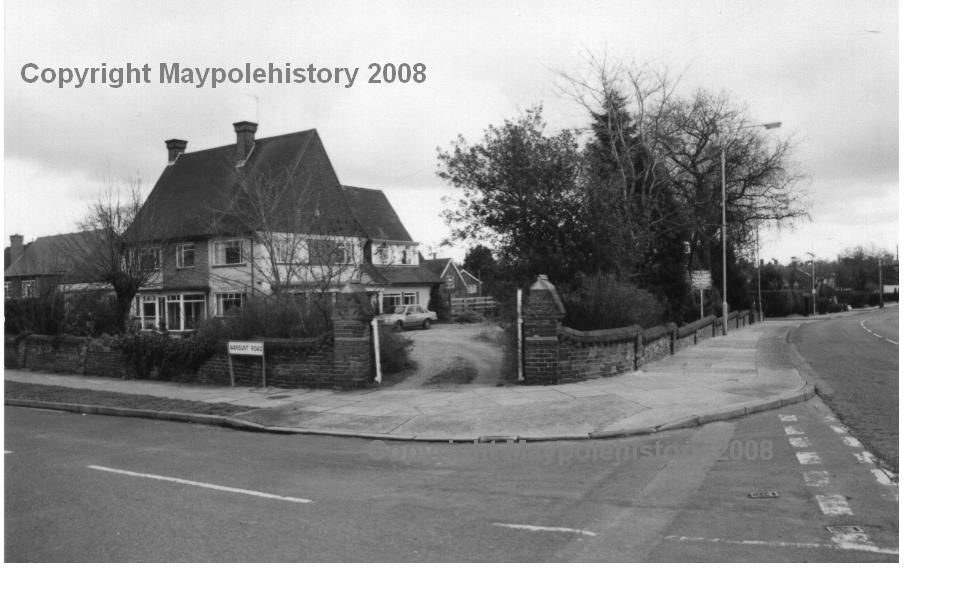 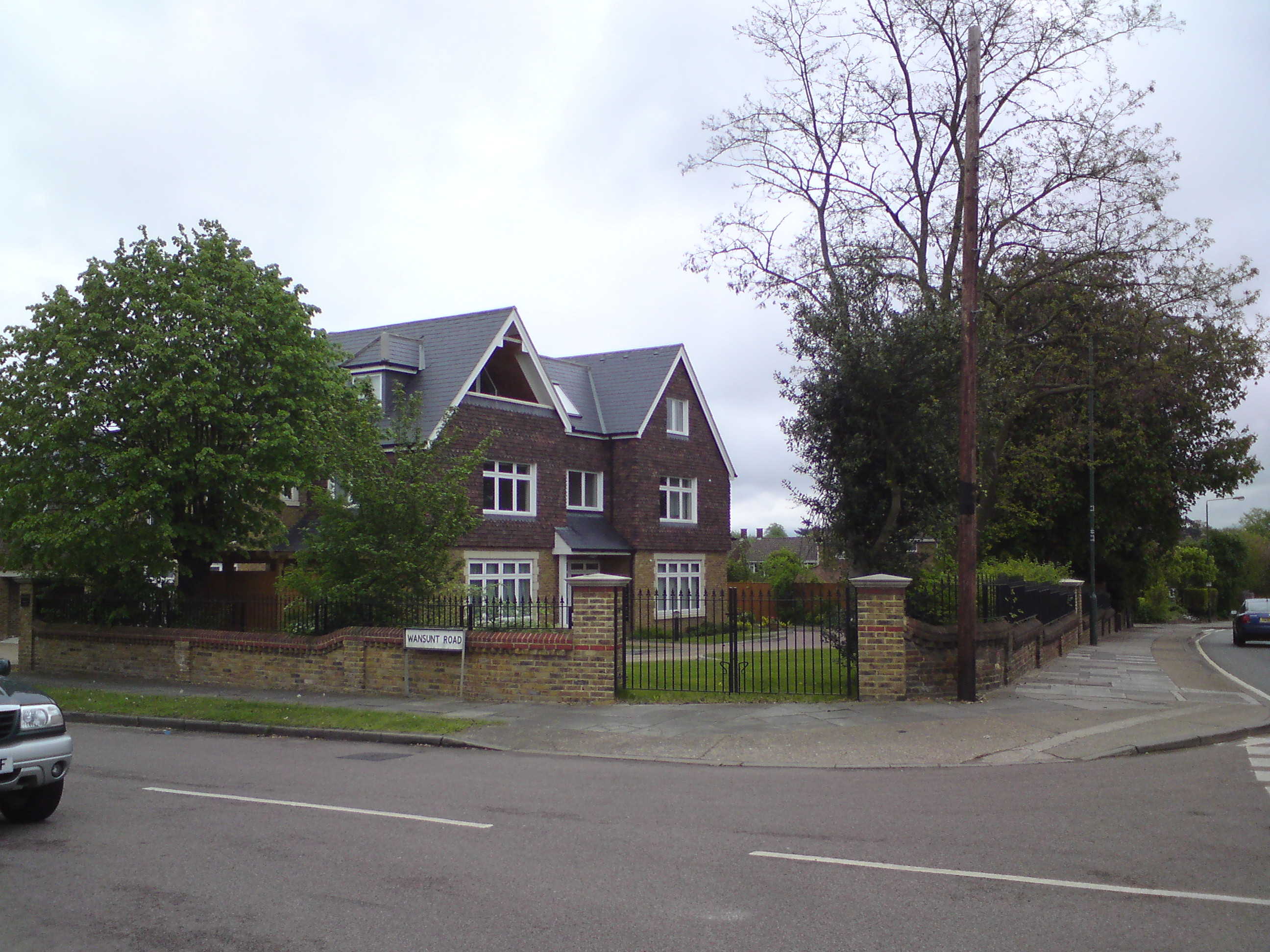 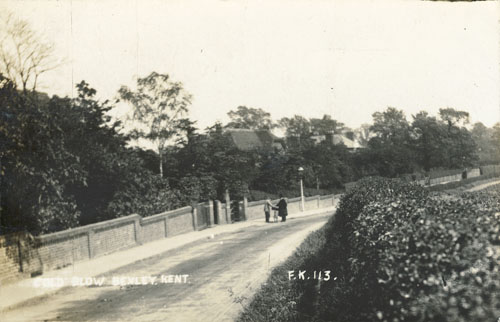 Above - Date 1906 Description Dartford Road, Bexley. The area is known as Cold Blow. The view is looking towards Baldwyns and Bexley Mental Hospital. Correspondence and stamp on reverse of both copies. 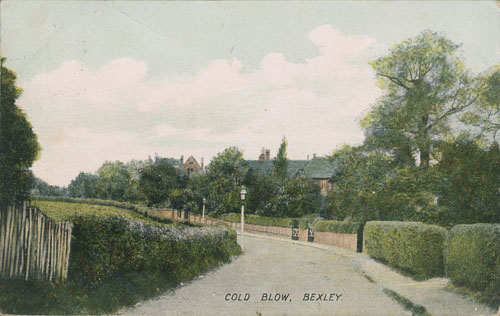 Above - same view as below.

Date 1908 Description Dartford Road, Bexley. The area is known as Cold Blow. The view is taken looking towards Bexley Village. Two small children, policeman and pony and trap in the road. Correspondence and stamp on reverse of postcard. 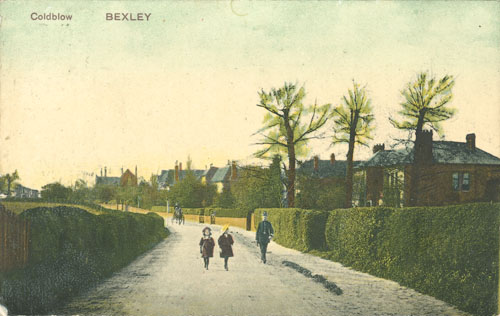 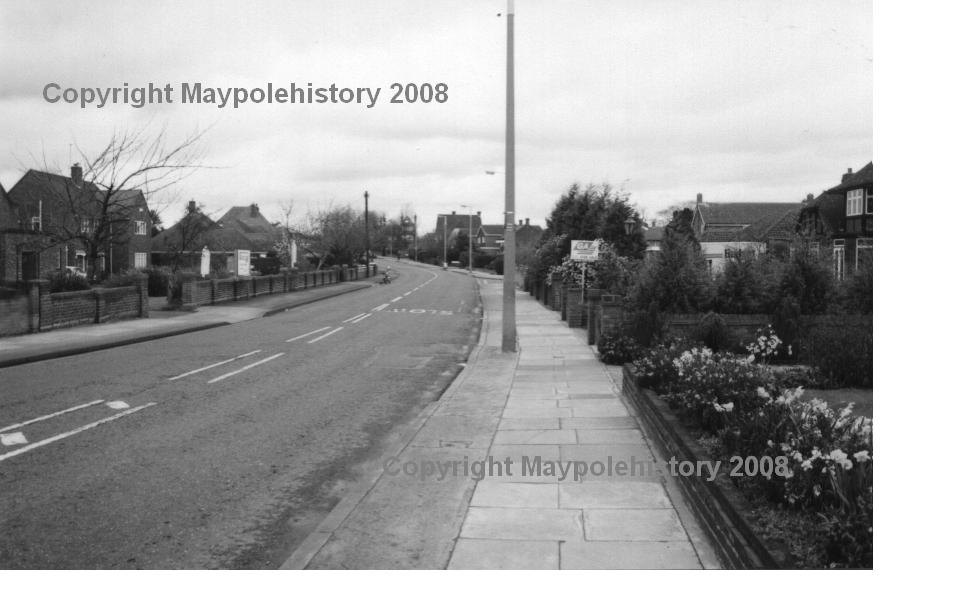 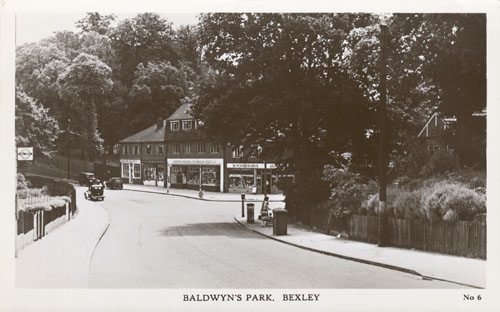 Below - the 'Dip' towards Bexley Hospital
Date 1913 Description The Dip, Near Bexley. 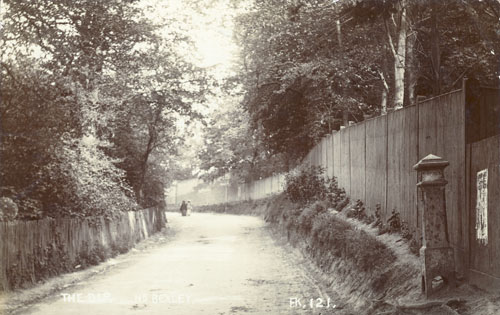 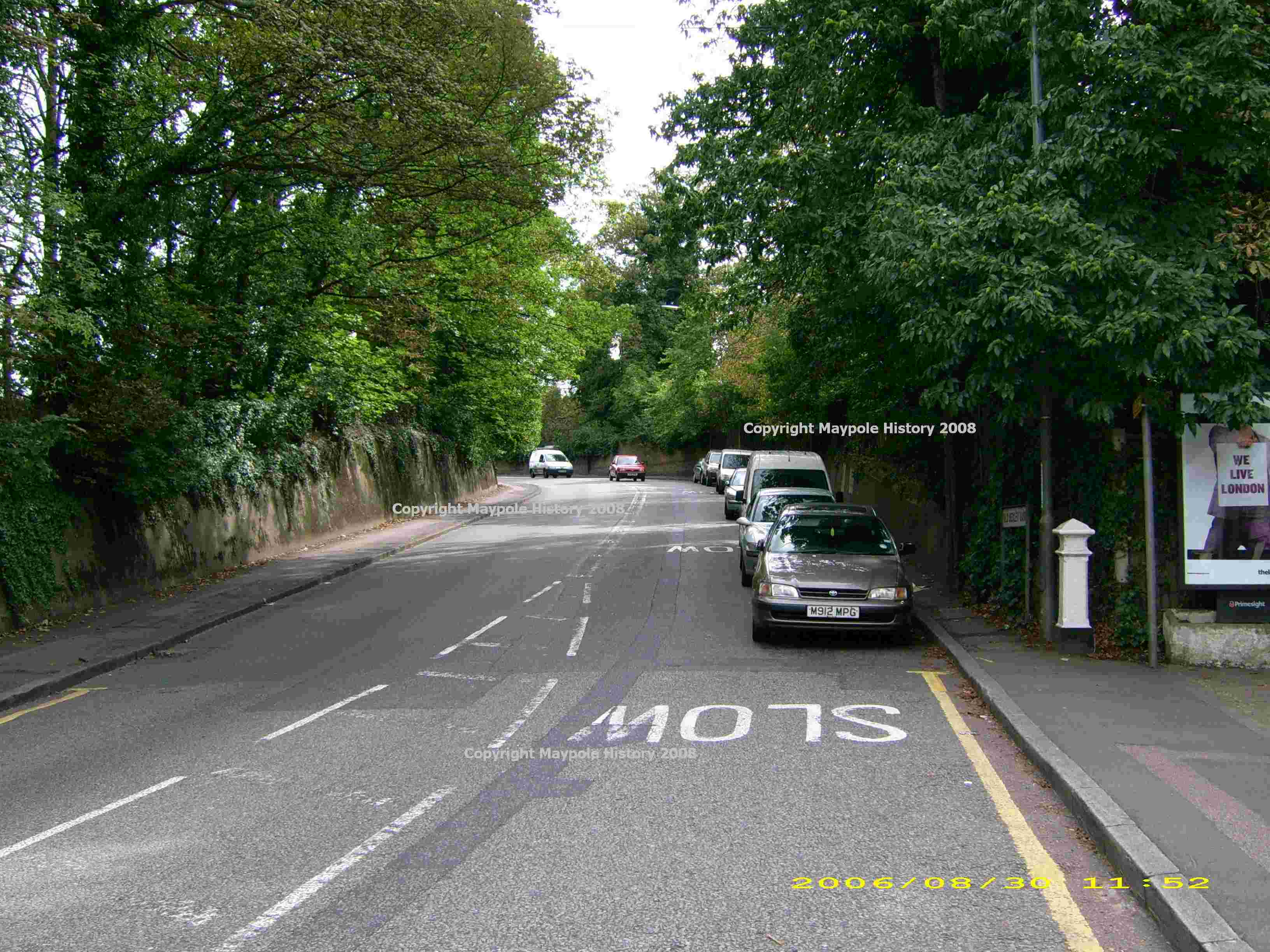 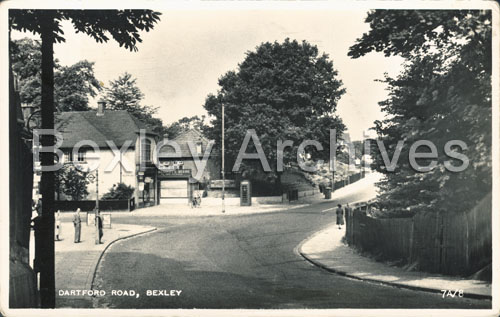 Coal sold in the City of London had been taxed since mediaeval times and, as it was all brought in by sea to one or two riverside wharfs, the collection of the duty had been relatively easy. A similar duty was collected on all wine landed in London. By the nineteenth century, however, there was increasing trade by canal and rail, and various acts of parliament extended the catchment area to a radius of about twenty miles from London. The City is a small (one square mile) but influential part of London and in 1851 an Act was passed specifying the points, far beyond its boundaries, where the collections could be made. Marker posts, inscribed with this legal authority, were erected. About two hundred have survived. Following enlargement of the Metropolitan Police District (which, paradoxically, did not include the City of London) in 1861 a further Act was passed and new marker posts were set to show the boundary inside which the duty was payable. Most of these later posts survive.
Not all of the points were staffed by tax collectors but on well-used routes with a heavy coal traffic, such as on the Grand Union Canal at Grove Park, Hertfordshire, permanent toll houses were built. [1][2] In other cases local coal merchants or, after the bulk of the traffic had passed to the railway, the railway companies calculated the sums due and passed the money to the Corporation. The railway companies were allowed to offset the coal they used for their engines, but only when employed on coal trains.
The erection of these posts was very much a last ditch attempt to retain the tax in the face of growing opposition. The tax had been running for at least two hundred years but within twenty years of the posts going up it was abolished. The Industrial Revolution was in full swing, London was expanding rapidly. The outer suburbs were becoming towns and their residents beginning to resent paying a tax which had very little direct benefit for them. One extreme case is Caterham which lay (and still lies) outside the Metropolitan Police District (MPD) but if coals were to be brought there by rail they had to pass through the MPD and presumably were subject to the tax.
The powers to extract these taxes were abolished in 1889, notwithstanding the City had fought against the abolition moves with some underhand tactics: a parliamentary select committee sitting in 1887 found that signatures on a petition in support of keeping the tax had been forged.[3]