Below from Sheila HOULTON. The Institute Hut Baldwyns Road . . . . .

Can anyone put names to faces and the year ? 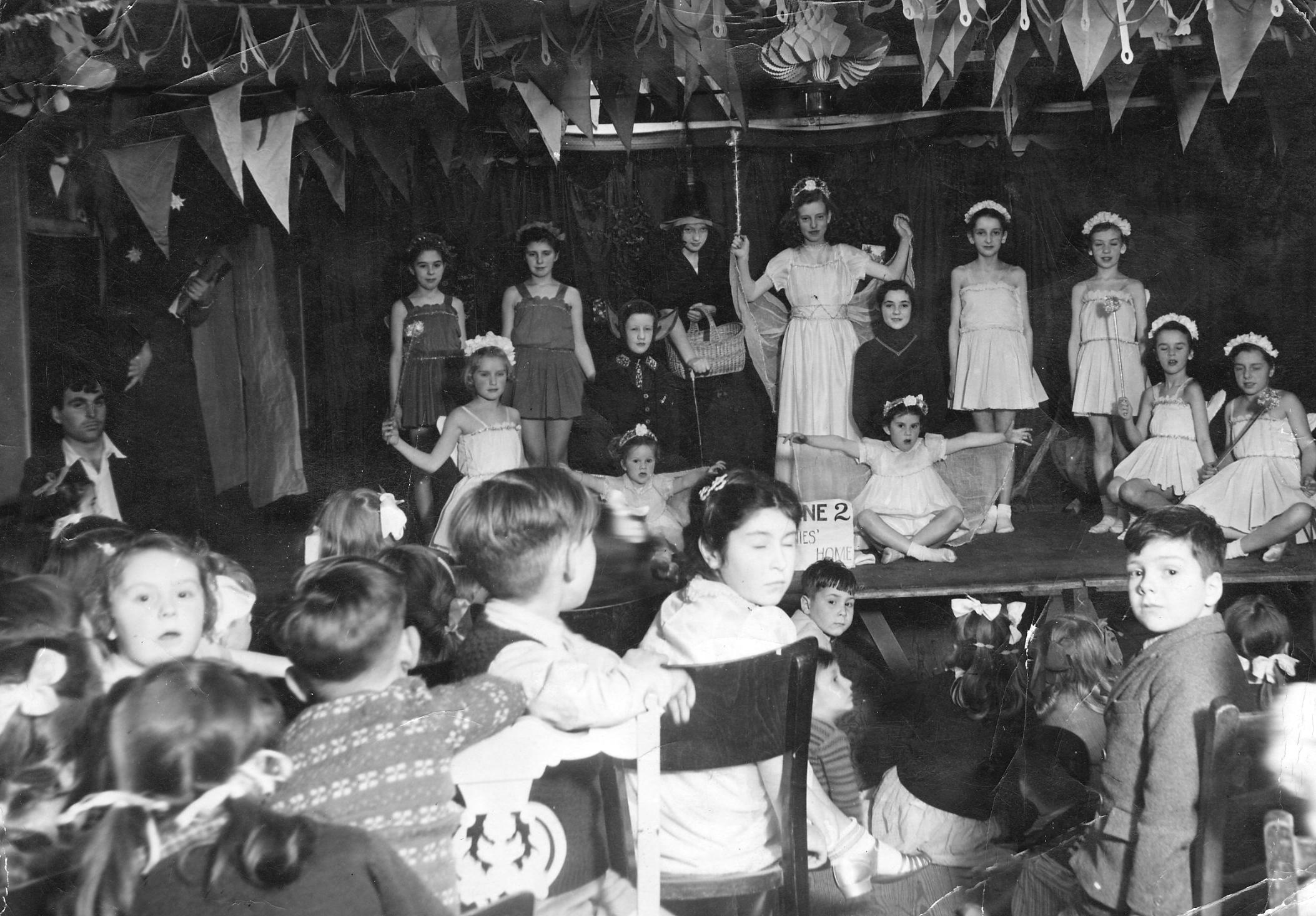 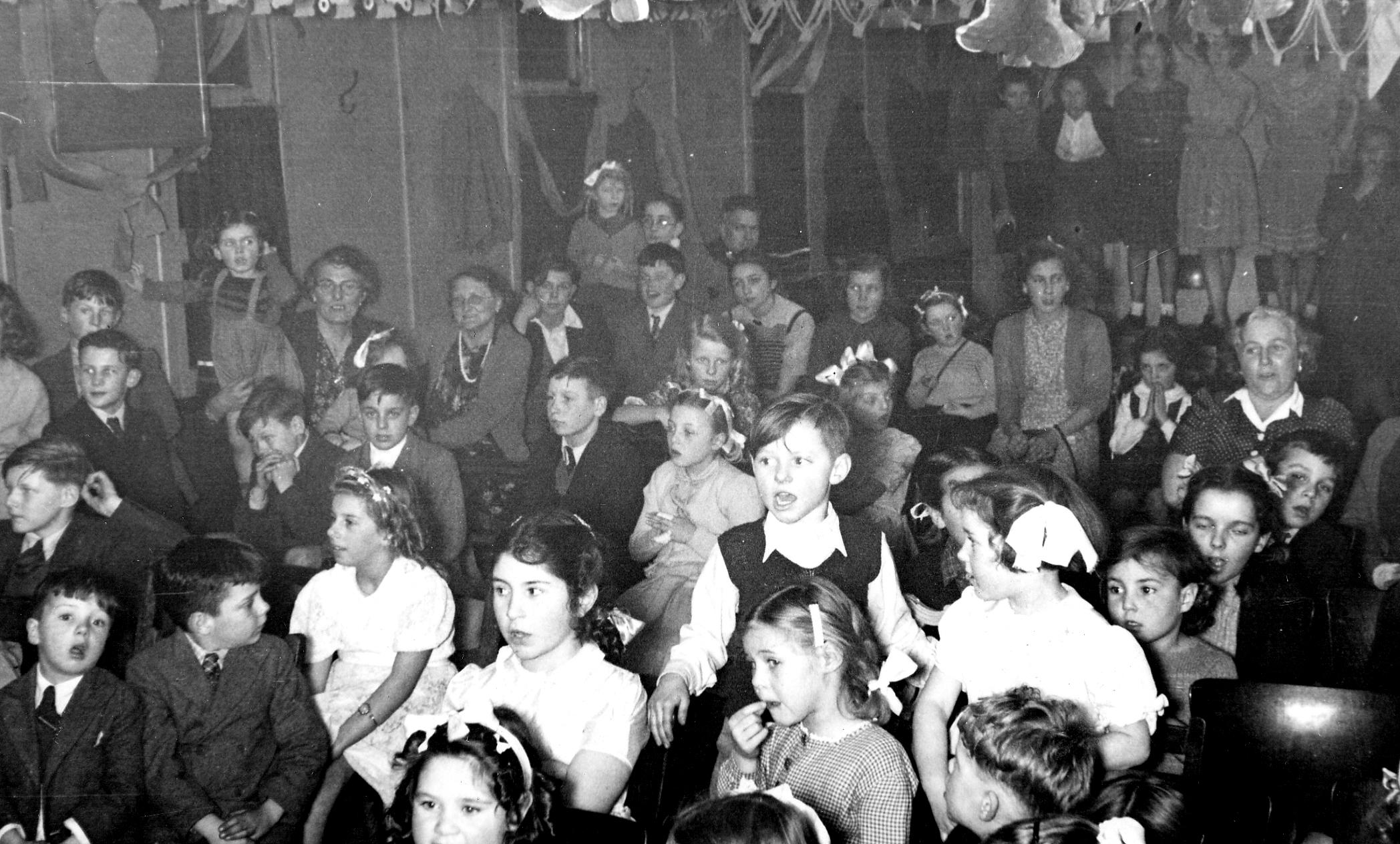 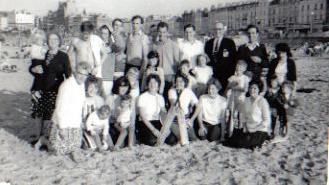 This has shrunk as it has come from New Zealand !

Actually it is only 42kbites so enlargement won't help.

Most of the people in this photo have lived on the Maypole at some time or other.Back row L to R---- Mrs. Barrett Snr. with one of her grandchildren, Jessie Barrett (now in U.S.A.) Ray Wheeler, Louis Cruickshank, ( owned a pub in Eynsford but not now ) Steve Parker,Bill Barrett in shadow, Morris Bridges, lived where Houltons used to live, moved to Leyton Cross. John Borrell, ran the butcher shop down the dip for a while, now in Erith. Bill Proudfoot, Vic Mcdonald, lady on the end ?
Front row L to R--- Lou Proudfoot, two girls with children not sure, Ailene Parker, Joan Mcdonald (nee Barrett ) her daughter Mary standing behind her, Netta Wheeler (nee Cruickshank). behind her my son Neville, girl next to him not sure,Mavis Barrett (nee Proudfoot ) the boy not sure, my wife Valerie, & then ? ?. not bad after 44 yrs. Regards Steve
Below 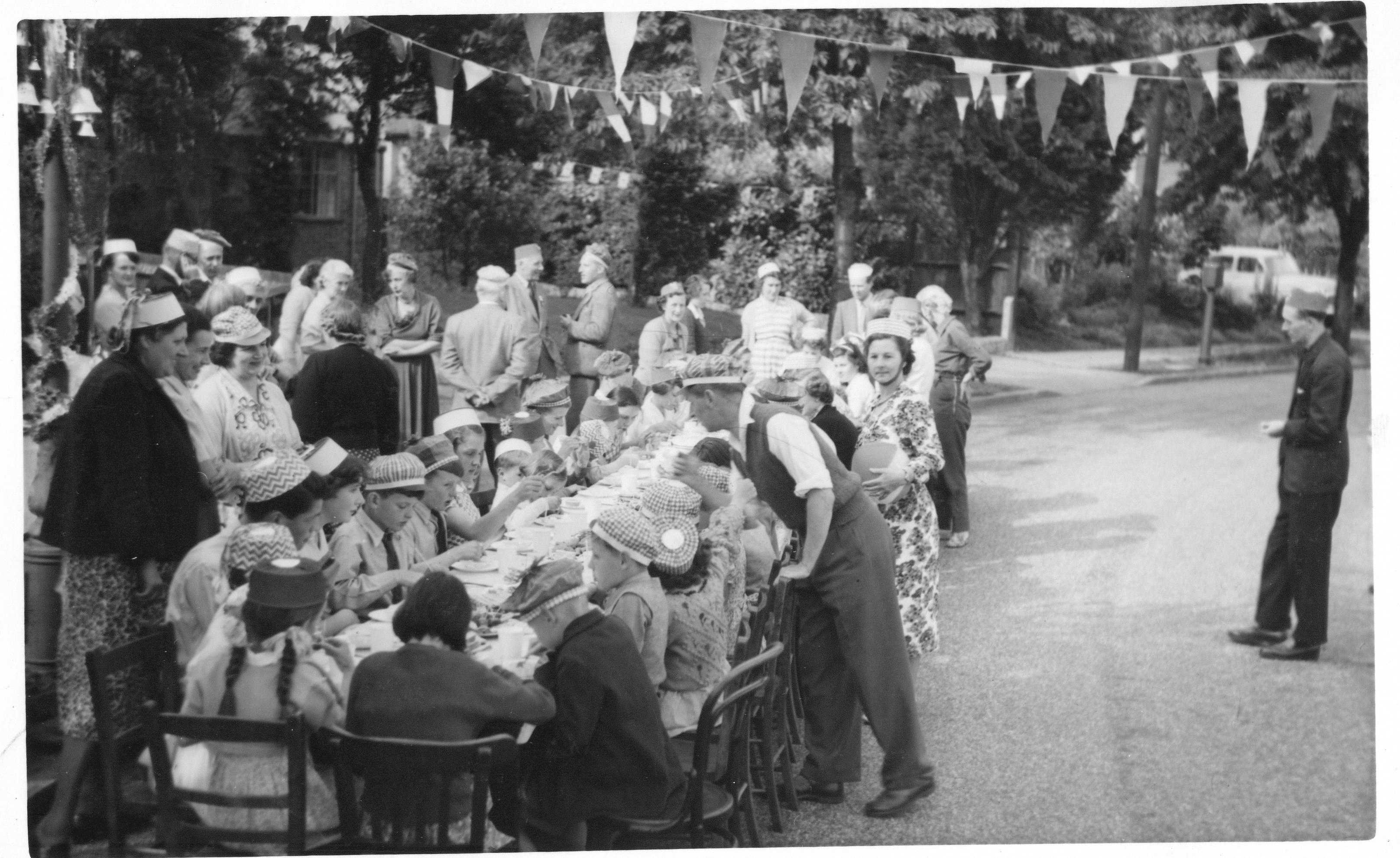 The below two images of a Sunday School outing to Ramsgate / Margate has been kindly donated by Barbara Houlton. Can anyone identify any of the group who were obviously having a good time ? Can anyone identify which year ? Please contact us if you can. 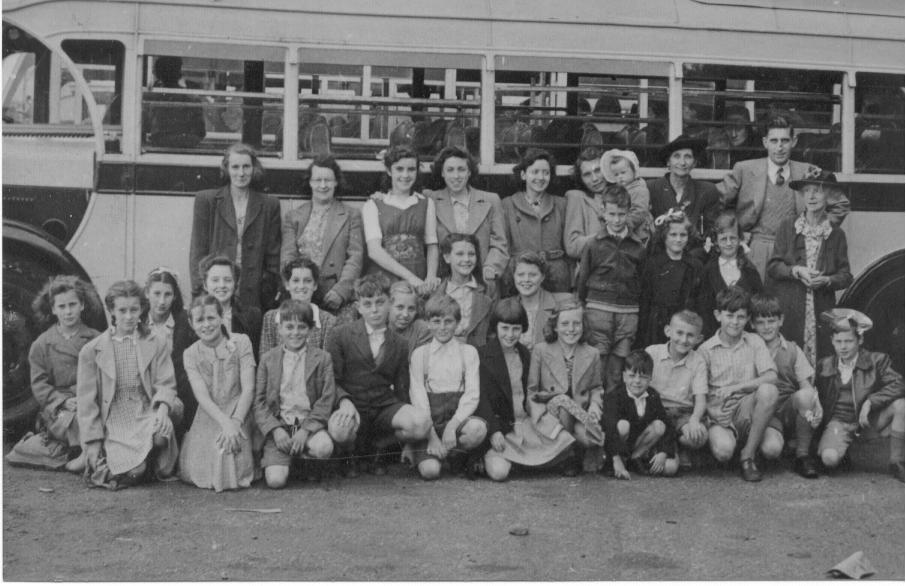 Barbara Houlton (take two housepoints !) remembers the names above and below as - 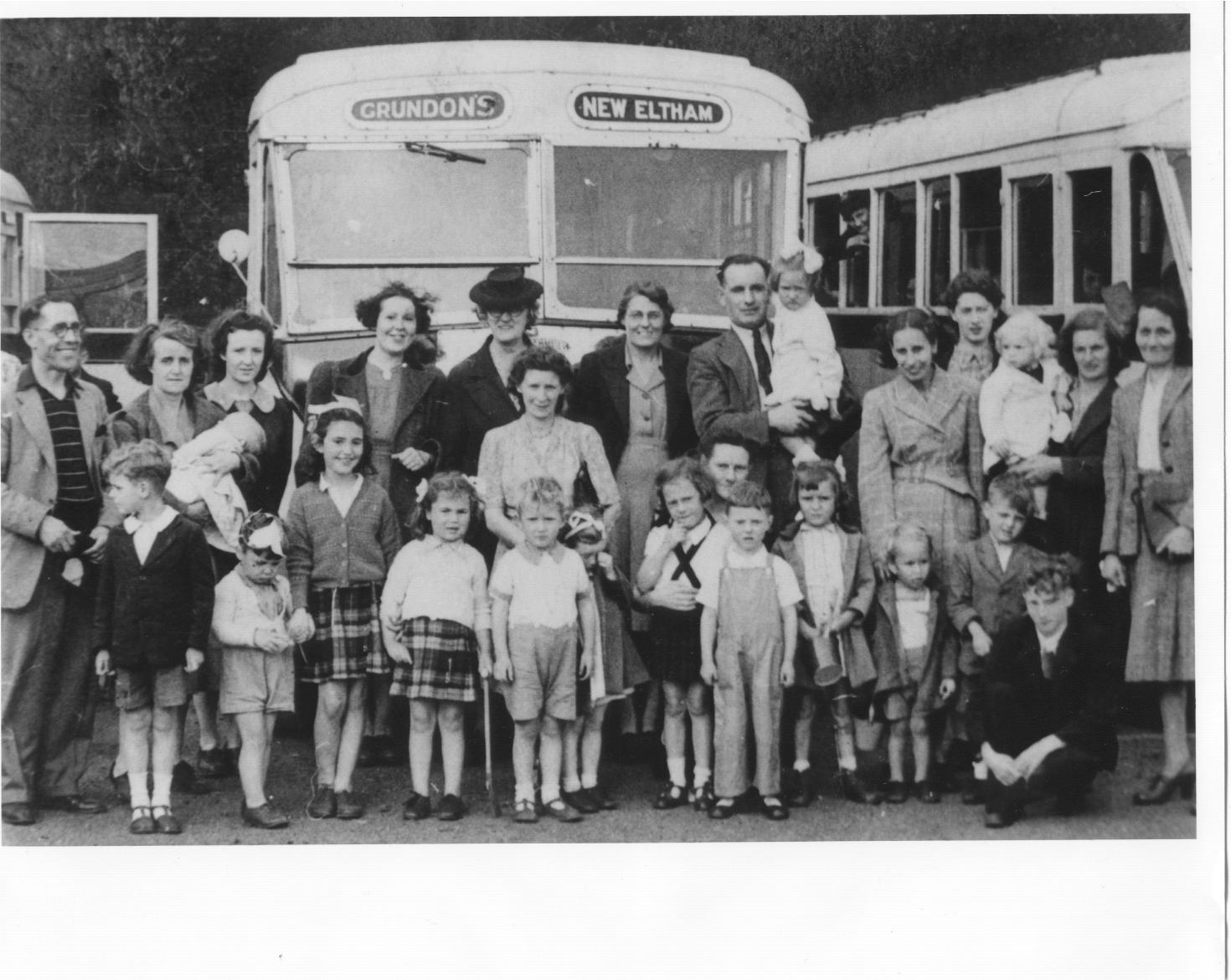 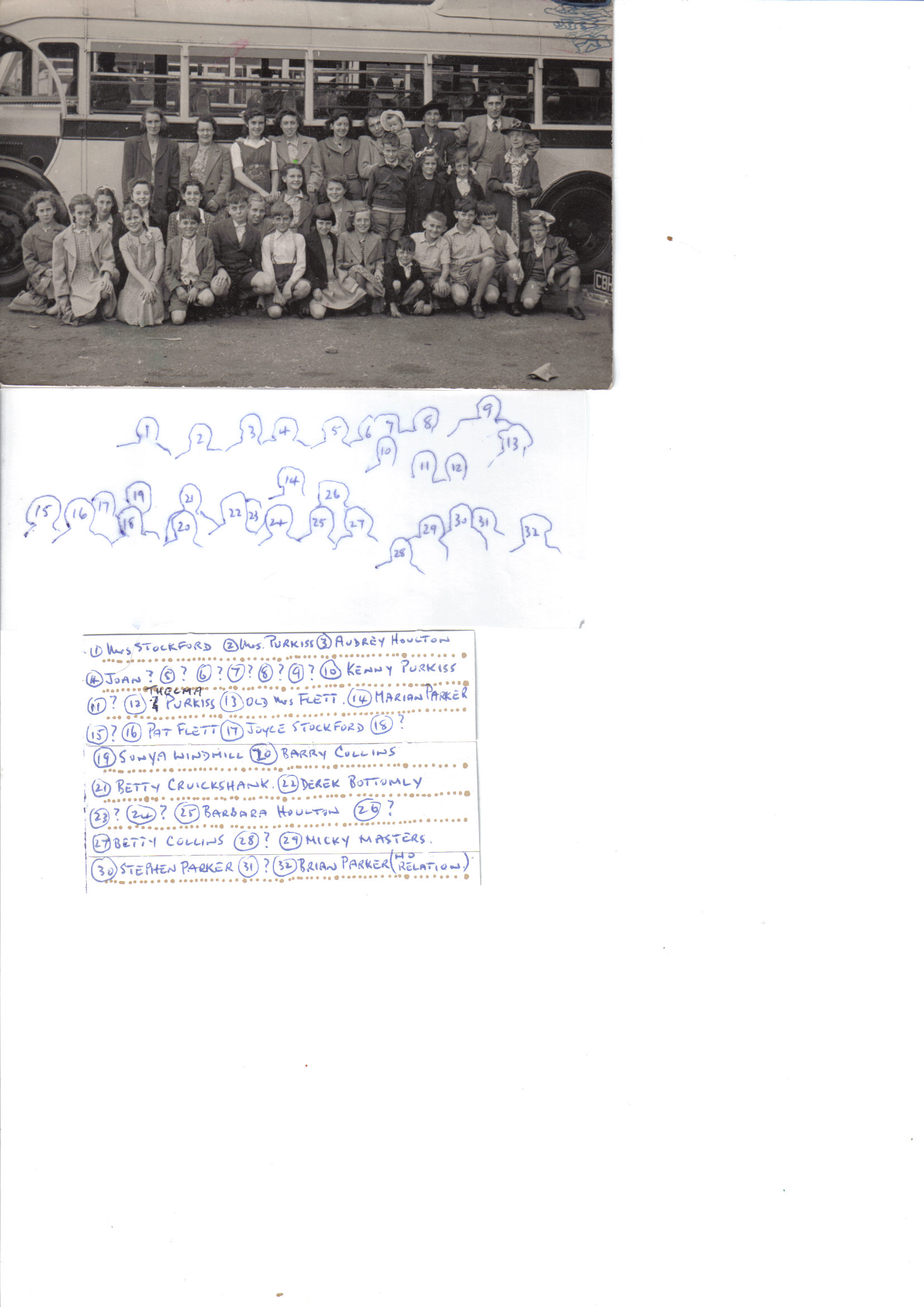 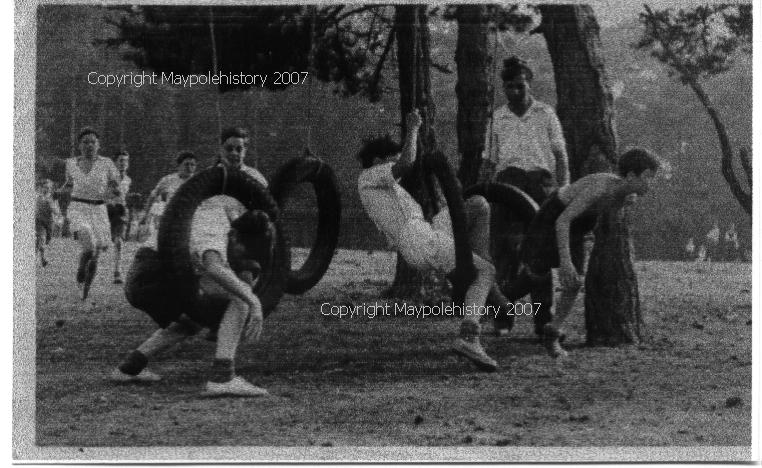 Cross country Broomhills c1955 ?. Believe man standing is 'Buster' from Denton Terrace. Can you identify any others ? 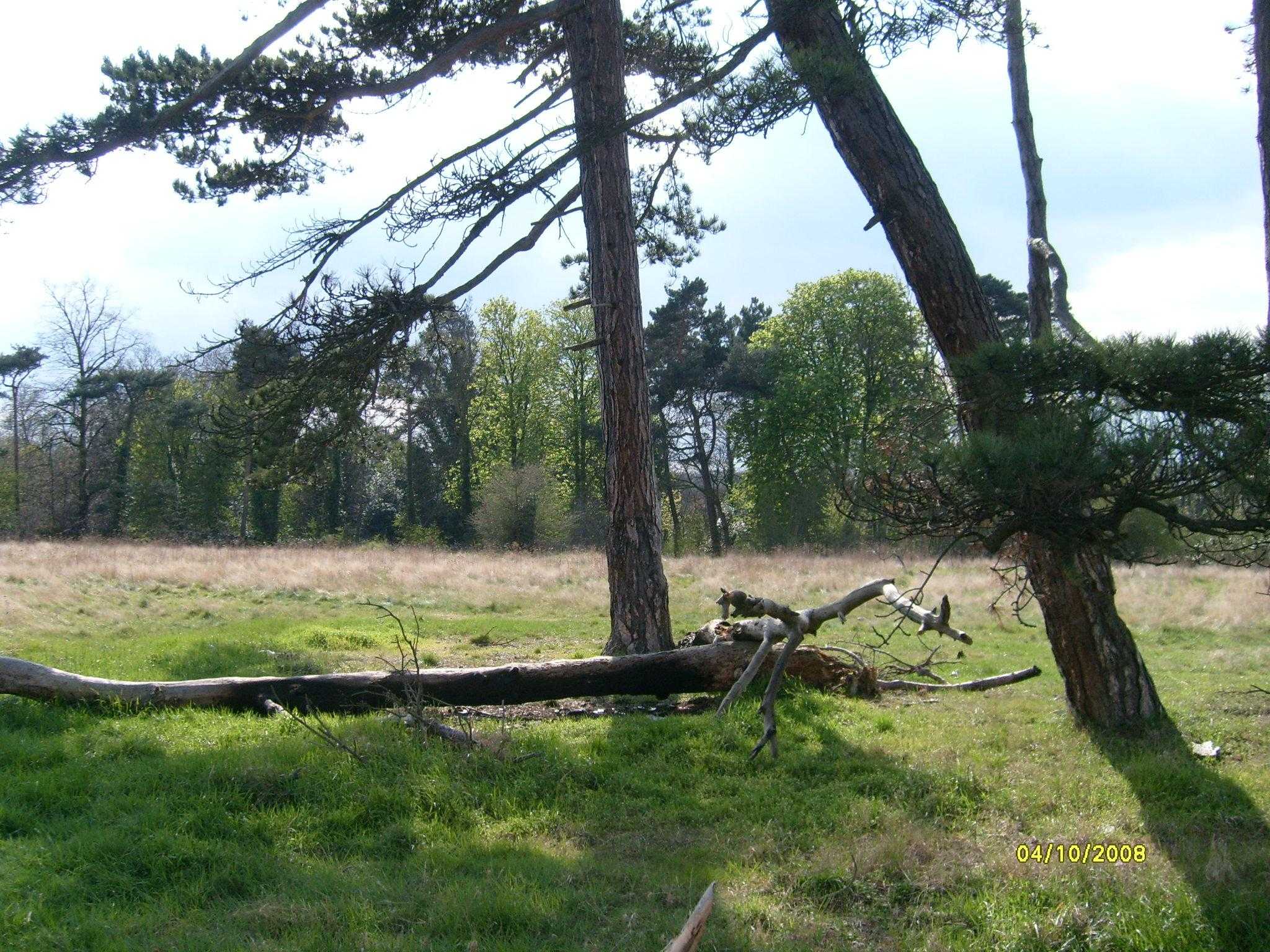 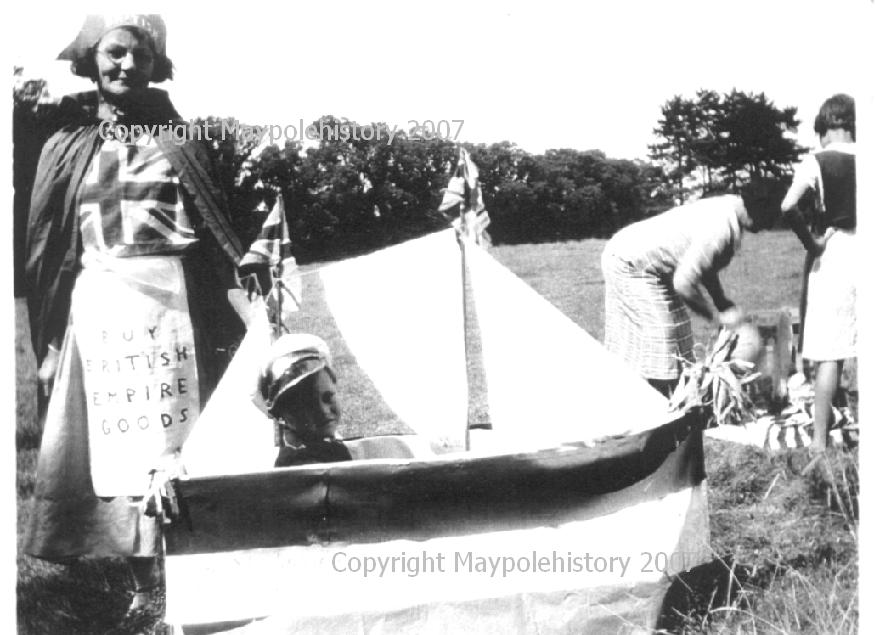 The Fete 1935 in Broomhills
Courtesy of Gordon Lennox - he is sitting in the boat. 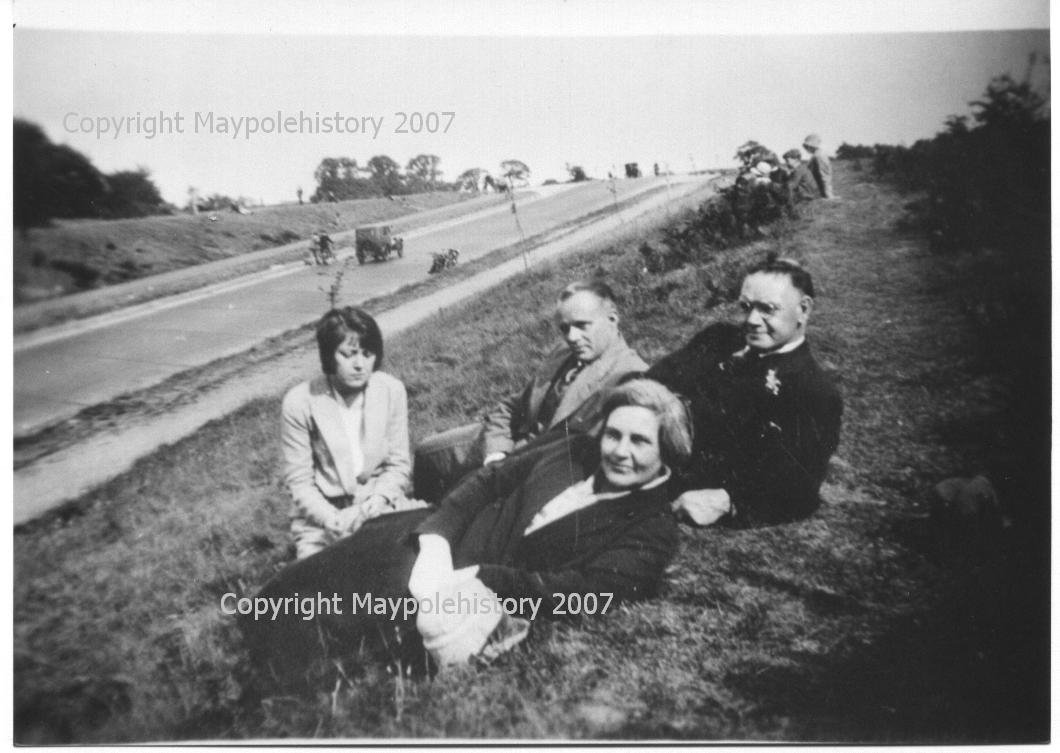 Watching the traffic - a common Sunday pastime - on the Rochester Way junction with Denton Road c1935. Sitting at the back on the right is Mr Edwin BLACKMAN who lived at 12 Denton Terrace (father of Winnie Blackman ) He became Mayor of Dartford in-between the Second World War years. Can anyone identify the make of car in the photograph ?
Image Courtesy of the late Winnie Blackman. 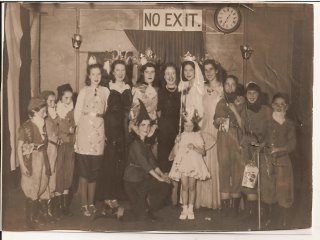 Above
cl947 when we had a pantomime (Snow White and the Seven Dwarfs) at the Institute Hut in Baldwyns Road. It was the highlight of our lives then, and all put together by Joan Houlton. I will list the "actors" right to left.

An outing for some residents of the estate c early 1950s ? Can anyone recognize any of the participants ?
Image courtesy of Wendy Saunders.

Sheila Houlton can take a housepoint - no - two house points for the below !
Back, L to R. Mr. Beck, Mr. Whitehead, Mr. Proudfoot, Mrs. Proudfoot, Mrs. Proudfoot's sister, Mr. Miles (from shoe shop) Mrs. Barrett, Mrs. Miles, Mrs. Saunders, Mrs. Thornton (holding child) Mrs. Curdling, Can't place the gentleman in open shirt)
Front standing: Mrs. May, don't know the next one, Mrs. Roberts (in coat and hat) Mrs. Colegate, Mrs. Colegate's daughter, Mrs. Lott, Mrs. Perkis, Mrs. Turner, Mrs. Winscombe, ?Mrs. Stokes or Mrs. Blackman. Can't see to end of row.
Front, crouching: Mrs. Whitehead, Christine Miles, Mavis Proudfoot, Evelyn Lott, unknown small child but could be Jeannie Parker?, Derek Lott.
This is from a print-out of the photograph I was sent by Evelyn a couple of years ago. I will need to go back into the website to look at the photo and see if I can make out who is at the end and I will show it to my brother, Dennis, who may indeed know the ones I can't remember.
Hope this is helpful and if I have guessed wrongly, I hope someone else can correct?
Regards,
Sheila (Houlton) 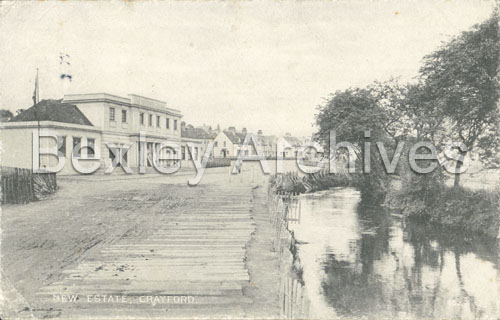 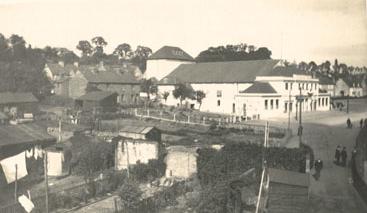 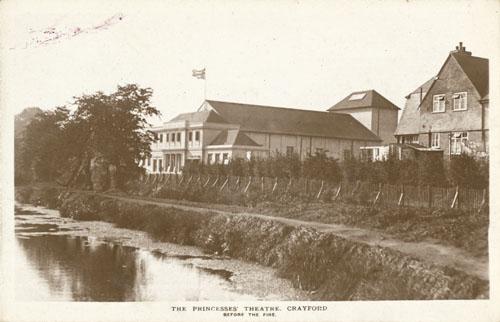 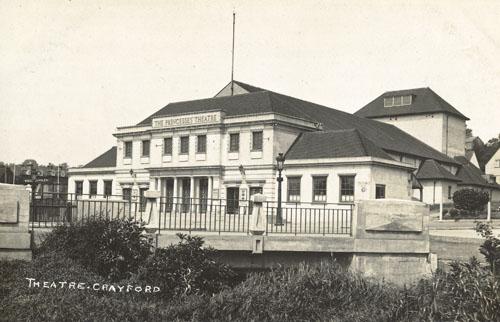 Above Princess' Cinema / Theatre Crayford - courtesy of Bexley Archive who have the copyright.

Date 1916 Description The Princesses Theatre by the Waterside at Crayford. Just beyond the theatre is the beginning of Crayford Way. The Princesses Theatre was built by Vickers but in 1921 it was leased by Sidney Bacon to become a cinema with occasional music hall artistes appearing there. Correspondence and stamp on reverse of postcard. 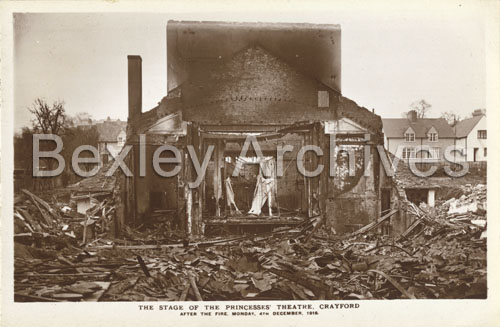 The Princesses Theatre after the fire on 4 December 1916. Only the entrance hall and stage areas survived. The ornate auditorium was completely destroyed. The theatre was subsequently rebuilt and reopened in 1919.

Back to top of page