The Glory Bumps (and they are glorious for riding bikes / pushing your zimmer over) still exist on the heath near Heathclose Road and Shepherds Lane. The story goes that they are the last frantic remnants of those excavating sand and gravel from the heath. Instead of digging a quarry - the quickest method, it is also said, was to dig a trench and toss the spoils to one side. See the reference to Baldwyns as it was Charles MINET, back in c1874, who took the Lord of the Manor to Court to stop destruction of the heath by such methods. 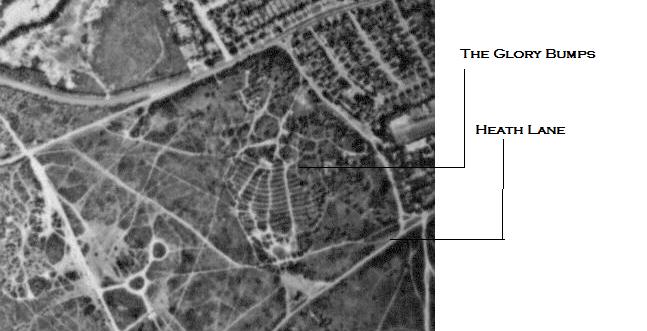 In the years following closure as a quarry they provided an expansive playground for children from all over the West Dartford area, including those from the Maypole Estate.

John Burton (one of our readers) advises:

Lee Smith was asking what caused the glory Bumps , In the 1840's My wife's 2nd great grandfather .Thomas Smith was a Brickmaker On Dartford Heath, They needed Brick Earth ,a mixture of sandy clay to make the bricks, to obtain this they dug away the top soil 18"-24 "thick ,they piled this up in banks behind them , they worked in rows, once exposed they removed the brick earth ,up to 6' thick , when they had worked the row , they moved forward again removing the top soil again placing it behind them , a bit like double digging , and there you have the glory bumps usualy in. quite striaght rows, if you look carefully.

Just down the road in Upper Heath Lane about where the garage is today was a Public House called The Brickmakers Arms,Which my wife's 2 nd great grandmother Tabitha Reynolds was the licencee.

Brickmaking was thirsty work and no doubt, on a hot day they had a bit too much to drink , therefore explaining the sometimes uneven bumps. She had 9 Children by Thomas Smith but never married him , but it seems a stable relationship, their children were all called Reynolds Smith as a Surname , on his death at an early age of 56 he left all his children and Tabitha a tidy sum and his brickmaking business in trust for the benifit of his Family ,being run by his son William Reynolds Smith , who died in 1916 .,It continued on as a Gravel Extraction company for a few years after this along side Upper Heath Lane where Vale Road is Today untill the gravel ran out .
So now you know Lee , and maybe YOU are one of these SMITH'S. Thomas Smith is Buried in St Paulinus Church Crayford, Tabitha and his children ar mentioned on the head stone .The Brickworks was on the site now occupied by DARTFORD GOLF COURSE.