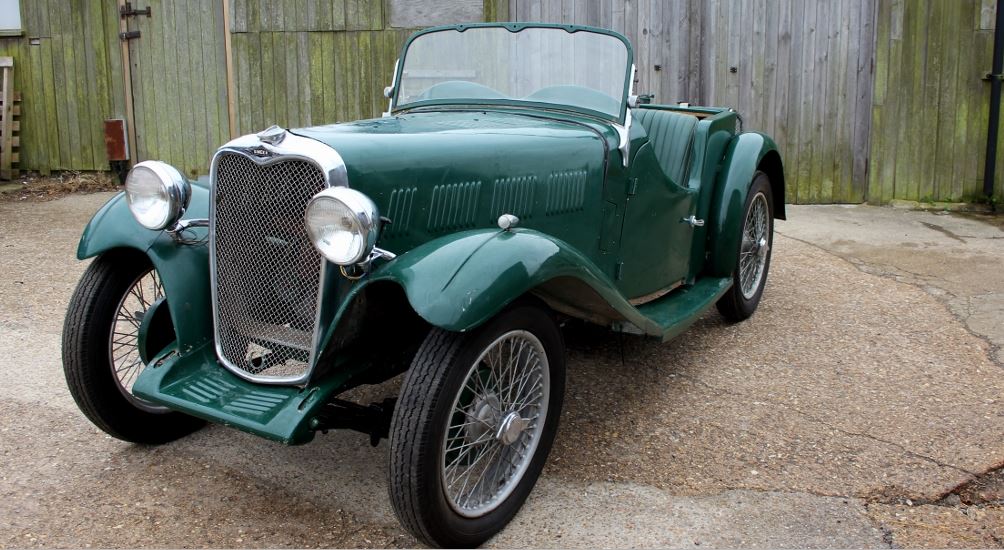 1935 Singer owned by Mrs Constance Winter in that year
Thankfully, a random web-surfer came across the Winter family on this web-site. Carl Davy has sent information and a picture of a car he currently owns and is restoring.
The picture does not appear on some iPads / tablets at this stage so will be re-attached soonest. It can be viewed if you go to 'photos' - found in the top bar of this page.

Have any readers any information about the connection with the Winter Family and the flying / racing car
connection ? If so please E Mail us at the E Mail address on the Home Page.

The following information has been supplied - permission has been given to also add a photograph of this classic sports car
Attached is a side view of the car. It is a 1935 Singer 9 Le Mans 'Special Speed' 2 seater. It was registered to Constance Winter of Maypole House in 1935. The Special Speed came out that year celebrating motorsport successes - so Constance had one of the very first of this model. Very much the 'must have' car of that year.

Constance Winter was married to Harold Winter.
Kings Cup Race
Harold Oscar Winter and an R A Winter listed in Kings Cup Air Race.
The 'Flight' Magazine dated August 10th 1939 reported that the aeroplane race was to be held at Birmingham Airport on Saturday 2nd September 1939 - the day before Britain declared war on Germany. Listed in those taking part were the following:- Harold Oscar Winter entering the plane, a 'Comper Swift' with engine D H Gipsy III. The pilot was shown as being R. A. WInter. It has also been discovered that an R.A. Winter was serving with the R.A.F. in 1939 with 247 Squadron. That source of information shows that this R A Winter from 247 Squadron died in 1970. Are these the same Winters that lived in Maypole House - we think so. So, if any of you out there have any supporting information on the aero connection or about the car / racing connection do let us know.
Below is a Rolex advert from March 1940 - 6 months into WWII 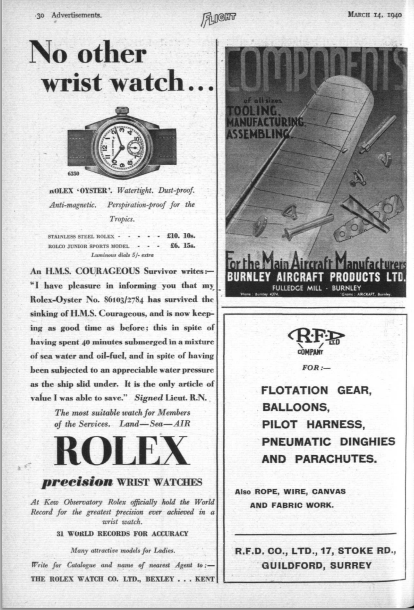 Carl has discovered some 'titbits' about the connection of the Winter family and the Rolex Watchmakers.
The Singapore Free Press - 17th September 1946 Page 3
"400,000 miles to sell watches. A young ex fighter pilot R.A. Winter of Bexley, Kent, plans to fly more than 400,000 miles in the next 5 years, equivelant to more than 16 times round the earth. His firm of Swiss watch manufacturers has arranged with the British Overseas Airways Corporation an itinerary which will enable him to visit every city."
The Straits Times 11th September 1950 Page 4
"DINNER PARTY - Mr R.A. Winter representative of Montres Rolex S.A., Geneva, was entertained to dinner by the Borneo Company Ltd. at the Tai Tong Restaurant, Happy World. Among the guests were:- H Senna, G.P.M. De Silva, K.A. Richard DeSilva, and representatives of the Chee Kong Store, Tuck Chong Watch Company, Cheong Hing Watch Company, Yong Kwee Co., Chin King Store and Woo Hing Brothers."
Carl has also discovered information regarding the 'winding up' of the 'Rolex Holding 'London' Company' in 1966 when Richard Winter was the Chairman. Viz.:-
The London Gazette - 19th July 1966 :-
"At an Extraordinary General Meeting of the above named company duly convened and held at Maypole House, Bexley, in the County of Kent, on the 5th day of July 1966 at 5.30 p.m., the Subjoined Special Resolution was duly passed:
That the Company be wound up voluntarily and that Cedric Hinton Fleetwood Reynolds of Danes Inn House, 265 Strand, London W.C.2 be and he is hereby appointed Liquidator for the purposes of such winding up".