THE EARLY MAYPOLE HOUSING ESTATE
Portman Close and Heathwood Walk stand on the site of where Maypole House once was, which in turn existed on the site of where Maypole Farm had been. Maypole Farm was originally situated on land that once formed part of the BALDWYNS Estate and was sold at auction in c.1876. Kept up so far ? Then we will continue . . . . .

Maypole from the air c1925
The eventual purchaser of the Baldwyns Manor and Parkland section of the Baldwyns Estate was the London County Council ( L.C.C.) This was the site chosen as suitable for the construction of an 'Asylum for the Insane'. The Maypole housing estate was developed and constructed to house the workers of the asylum.

There were shops built along the Bexley Lane facing the new hospital to supply the residents of the estate. There appears to have been a building on the site of Maypole Cafe (O.S. MAP 1869) for some time prior to the estate being built. At this moment we are endeavouring to discover its origin and identity. Evidence indicates that the parcel of land on which the housing estate now stands was bought by property developer(s) and not the L.C.C. (See chapter on BROOMHILLS).

A sketch plan dated 31st July 1897 shows that a Hotel was proposed on the site of the current three story building to the east of the mouth of Beaconsfield Road at the junction with Old Bexley Lane. This original plan mentions Messrs JENNINGS and FELL and indicates that they were involved with the building proposals of Denton and Beaconsfield Roads. Further information confirms that this is the case and that Jennings and Fell were land developers. They are mentioned in conveyance documents together with the owners of Baldwyns Manor who owned vast stretches of land in the area. That information refers to a transaction dated 1877. 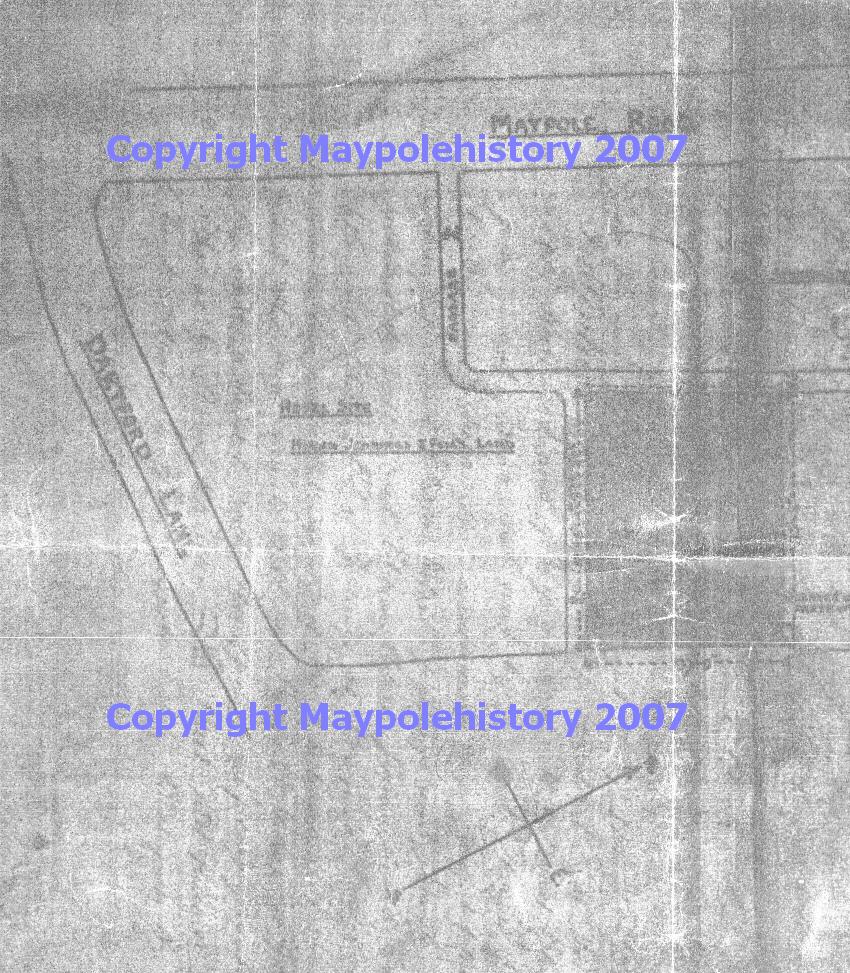 Below - the profile (from the rear) of the original (and current) building to which is referred 'Proposed Hotel' does, in fact, resemble a half finished building which could quite well have been the beginnings of an hotel 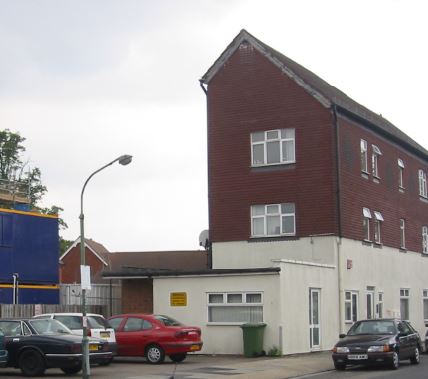 The theory of private developers is also supported by the fact that the housing estate was constructed in fits and starts. It is understood that the CAMERONS who lived in Broomhills (c.1923 - 1959 ?) owned part of the estate and Mr Joseph CAMERON was responsible for the construction of several houses on the western side (51 - 63?) (Info from Phillip RUMBELOW and David CRUICKSHANK) of Baldwyns Road and towards the bottom of the road that adjoins Heathend Road.

Most, if not all, of the occupants of the original housing estate rented their terraced houses and most worked at the asylum. It is apparent that the lands of Maypole House and the housing estate were then made quite separate at the turn of the century.

There is a story that the first new house to be built on the Maypole housing estate, was Grosvenor Cottage on the Bexley Lane. Before her death in 1995, one of the original occupants of the estate (Miss Eugenie SKEVINGTON) informed one of our team that this was the family home of the first contractor to start building on the estate. She maintained that one of the reasons for his residence there was so that he could overview the construction of the new Maypole dwelling complex. We have since been informed (by the late Naomi COSSHALL nee CURDLING) that it was constructed by Mr Joseph CAMERON for his daughter, Dorothy. The earliest record we have at this stage of occupation is the Electoral Register of 1937, showing Frances (Wife of Joseph) and John (Son of Joseph) CAMERON in residence.

The electoral register of 1900 shows that some of Baldwyns Road - certainly the even numbers in total - had been built and some were occupied. The same went for Denton Terrace. Maypole School was built in 1912 and opened in 1913 under the headship of James Frederick SNELL with Miss Ida MCCURDY reportedly as infants’ mistress. A Victorian O.S. map shows that the school is situated on land that had previously been the site of the local pound for the animals that once freely roamed the heath. It appears that Beaconsfield Road (Originally referred to as Maypole Road (early plans showing ‘Maypole Hotel’) and later as Beaconsfield Terrace (Mr Alfred PETERS)) was built just after Baldwyns and Denton. This is borne out by a photograph showing Denton Terrace from the front view and the buildings directly behind as the rear of houses in Baldwyns Road. If Beaconsfield Road had been built then this would have formed a physical barrier and would have shown in the photograph. It appears that from the date of construction of Beaconsfield Terrace (c1901) until about 1934 numbers 2 to 24 stood on their own.

To the front was the school, a green and the rear gardens of Denton Terrace. Number 24 was an 'end of terrace', flanked by the green, which extended to the rear gardens of Baldwyns Road. This meant that one could stand in Heath End Road and have an uninterrupted view of the school and the majority of its northern wall. Until about 1932 'The Green', as referred to above, was the 'playground' for local kids.
1902 Sale of plots of land for building - the real Maypole Estate is conceived
South Eastern Gazette April 26th 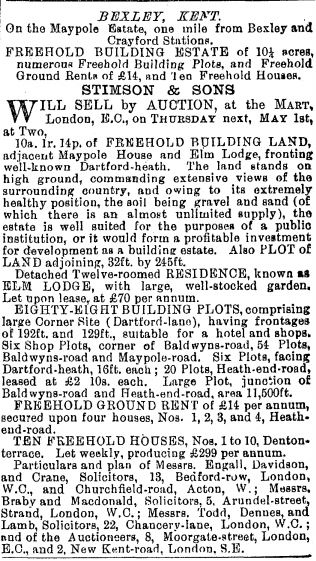 The annual bonfire on 'bonfire night' was held there. Further development of the estate then continued. Houses were constructed (odd numbers) opposite Beaconsfield Terrace and the even numbers were extended to Heath End Road. Rose Cottage, which once stood alone, was now surrounded. 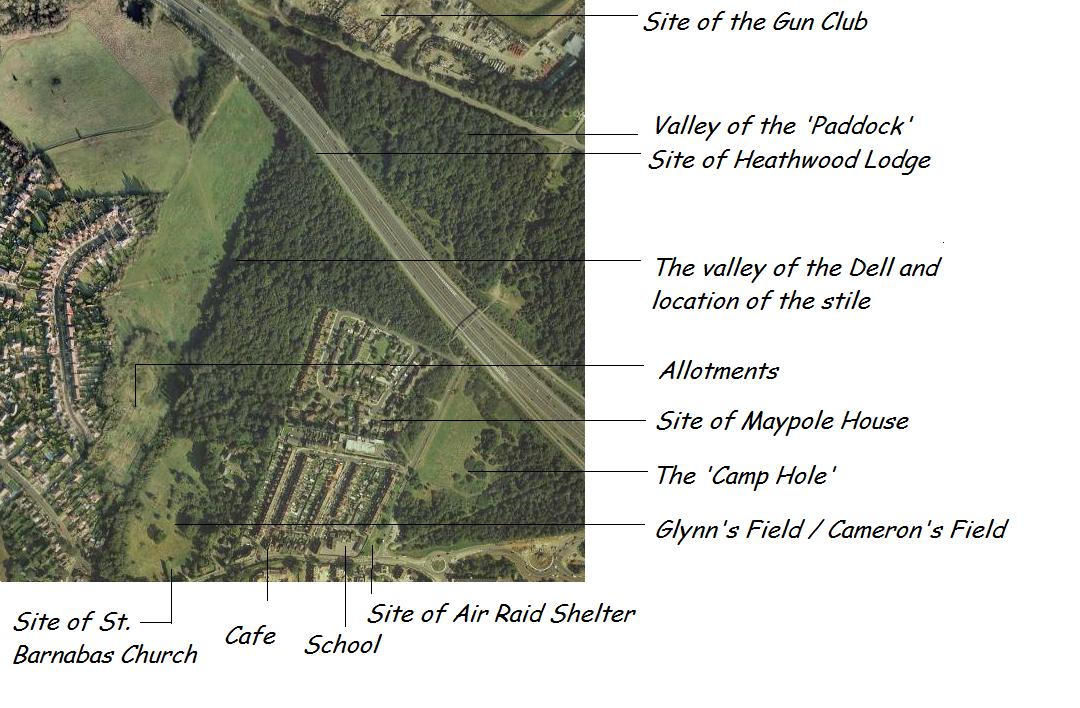