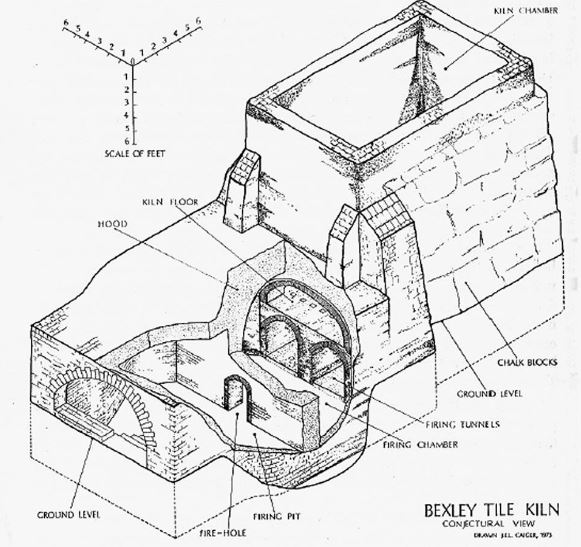 The history of the tile kiln that used to be situated in Tile Kiln Lane, here is some information on the construction of the tile kiln...
It has long been recognised that the track known as Tile Kiln Lane running from Bexley village towards Wilmington suggests the ancient association of this area with a former tilery.
During the Middle Ages, The Manor of Balwyns, adjoining the south-west corner of Dartford Heath, was the property of Lesnes Abbey and recorded within the abbeys accounts for c.1513 is a note of expenditure for building of, or repairs for, a tile kiln, located on The Manor of Baldwyns, as quoted in A.W.Clapham’s ‘Lesnes Abbey’ (1915): 'Tyle Kyln apud Bawdyne, LXVIs VIIId' (66 shillings and 8 pence)
Houses were built along the lane after the First World War and in 1971, when the area was being cleared preparatory to laying a new access road to a building development (taking place at the rear of some of the houses on the south side of the lane just past the Baldwyns Park junction), a mechanical excavator laid bare the outline of a rectangular structure. This was built of plain roof tiles a few feet below the modern ground level. The developers (Messrs. Malcolm Sanderson Ltd) gave their permission for an emergency excavation to be carried out by L.C.Dale assisted by J.E.L.Caiger and P.J.Tester before all the evidence was destroyed. Several sections were observed in the builders’ trenches which showed the filling of deep pits, obviously dug for clay used in tile-making and containing quantities of burnt material and tile wasters, proving association with the neighbouring kiln. Sherds recovered from the firing-pit were examined and they confirmed that the tile making was established here at least as far back as the early 16th century and continued into the 18th century. A few pottery fragments found indicated that there may have been even earlier activity. The street name of Pottery Road acknowledges this fact.The kiln was situated in a good place as the natural resources needed for the manufacture of tiles were readily to hand – extensive clay deposits nearby and fuel from the adjacent Joydens Wood. The necessary supply of water came from a small stream, long since dried up but observed in sections, running between the kiln and the lane.No kiln is shown on 1839-40 Tithe Map and the land on three sides of the field where the kiln stood, was owned by the Baldwyns Estate. Research among documents relating to the estate had failed to uncover any reference to tile-making in that period.Recently, in March 2014, The London Borough of Bexley proposed that the area of the discreet Tile Kiln to be of high archaeological importance.
The ground plan of the kiln was a rectangle measuring 15 x 10 ft. externally and was entirely constructed of roofing tiles whose average dimensions were 10 x61.4 x ½ in. and which bore two peg holes at one end. The floor of the kiln-chamber was supported by the tile arch work above the two firing-tunnels and the central wall. Holes were provided in the floor which allowed the heat to rise through the newly made tiles stacked carefully on their sides within the chamber. Access for loading and unloading would have been through an opening which would have been sealed up before firing the kiln.
In the firing chamber wood fuel would have been burnt to heat the kiln. The flames drawn along their entire length and through the holes provided in the kiln floor. Heat would also be deflected by the hood, entering the kiln-chamber through the upper arch. The firing pit was 18 ft. in length, defined by two walls, constructed of roofing tiles near the kiln end, but half way along the material changed to random set brickwork. Originally this pit had been dug at least 3ft. 6in. below ground level. So that the fire would not be affected by changes of wind direction. The pit provided a sheltered position for the tile burner to attend and stoke the fire and keep a stock of dry fuel always ready to hand.
Around the outer walls of the kiln were the weathered remains of chalk blocks. These would have been erected against the tile clad walls to provide additional structural support and to conserve the heat with in the kiln when it was being fired.
It is interesting to note that the twin-tunnelled up-draught kilns of the type described by L.C.Dale in his paper appear to have been used for tile burning with little change in design for over 500 years.